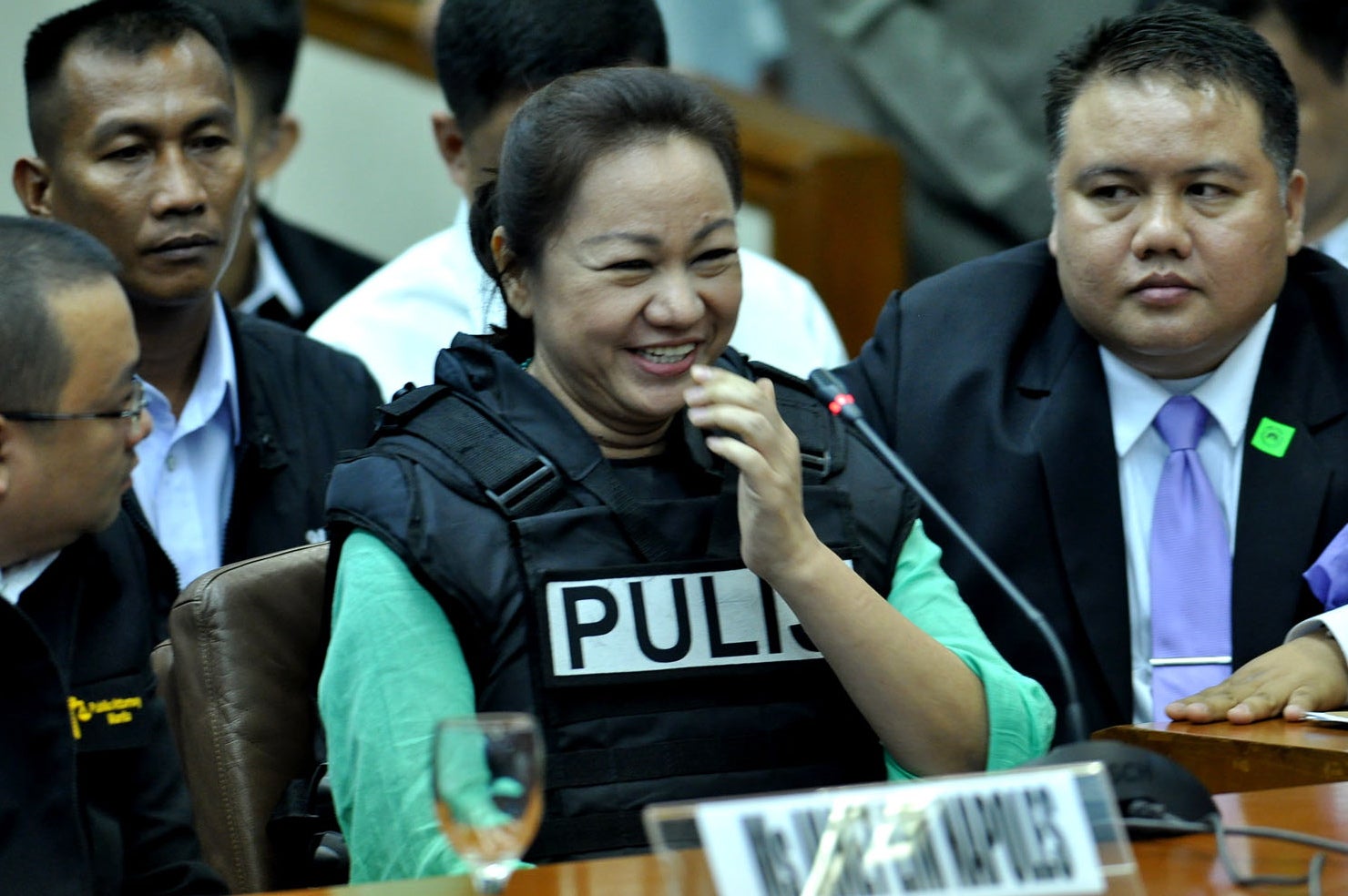 MANILA, Philippines–Senators on Thursday chided the Bureau of Corrections (BuCor) for submitting to them a defective list of convicts who had been freed after their sentences were cut short for good conduct.

“Almost 10 percent of the records are erroneous,” said Sen. Richard Gordon following reports that a prominent prisoner still serving time for plunder and facing other charges—Janet Lim-Napoles—appeared on the list.

Gordon is leading an inquiry into Republic Act No. 10592, which rewards good conduct with shortened prison terms in detention.

The Senate investigation, however, has also uncovered alleged payoffs for early release through good conduct time credits and other irregularities in state penitentiaries.

“The fire got bigger and the people are all the more losing trust in the government because of your sloppy work,” he said.

Gordon had directed BuCor officials to submit a list of the hundreds of convicts freed under the law passed in 2013.

The officials complied, submitting a list of 2,160 convicts doing time for heinous crimes who had been freed since 2014.

But the list included Napoles, who was convicted of plunder in December 2018 in connection with the P10-billion pork barrel scam that she allegedly masterminded. A copy of the BuCor list was obtained by the Inquirer.

Aside from the erroneous inclusion of Napoles on the list, the senators also found double entries and wrong citings of cases and causes for release.

The document grouped convicts according to the crimes they had been convicted of and listed their names in accordance with the dates of their releases. Napoles was No. 275 on the list of rape convicts released on Nov. 12, 2018, after “expiration of sentence.”

Justice Undersecretary Deo Marco told the senators that Napoles had no rape case and she remained an inmate at the Correctional Institution for Women in Mandaluyong City.

Napoles was a key figure in the pork barrel scam that used bogus nongovernmental organizations to siphon off lawmakers’ shares of the Priority Development Assistance Fund (PDAF).

These lawmakers allegedly got back some of the money as kickbacks from the scam exposed by the Inquirer in 2013.

Napoles has been convicted in one plunder case involving Sen. Bong Revilla’s PDAF and is still facing several graft charges along with the senator. Revilla has been acquitted of plunder.

The Court of Appeals acquitted her in 2017 in the serious illegal detention case filed by pork barrel scam whistleblower Benhur Luy.

At the Department of Justice (DOJ), Undersecretary Markk Perete said the DOJ had asked the BuCor to explain why Napoles was on the list.

The BuCor documents chief, Corrections Staff Sgt. Ramoncito Roque, told the senators the errors resulted from the haste in making the list.

“We were asked to come up with the list quickly because there was going to be a press conference in Palawan. That’s why it was done in haste,” Roque said. He did not say who called the press conference.

Bayan Muna also questioned the inclusion of Napoles on the list of convicts who benefited from good conduct time allowance, particularly the role of former BuCor chief Ronald dela Rosa, who is now a senator.

“Who signed her release papers? Did money change hands and why was she not released?” said Bayan Muna chair Neri Colmenares.

‘Every stone must be turned’

“Every stone must be turned to make these people accountable,” he said, adding that the good conduct credits were now a money-making scam by unscrupulous prison officials.

“This calls for a lifestyle check of all officials starting from 2014,” Zarate said

ACT-CIS Rep. Eric Go-Yap said he would file a bill that would define good conduct and amend the penal code by setting conditions for the grant of good conduct benefits.

In Mindanao, Cagayan de Oro City Rep. Rufus Rodriguez said the convicts released through the good conduct law should not be treated as fugitives.

“They are not escapees, they were released legally,” said Rodriguez, a coauthor of the law.

He urged the DOJ to direct its prosecutors to ask each of the courts that convicted the released prisoners for an arrest warrant to bring them back to jail instead of forcing them to surrender.

“There is no legal basis for them to be brought back to jail,” Rodriguez said. “These convicts should be advised by jail officials to wait for their warrant of arrest.”

President Duterte gave the convicts 15 days from Sept. 4 to surrender to the authorities or be hunted down as fugitives.

The Philippine National Police said 299 convicts have surrendered as of 6 p.m. on Thursday, 63 of whom it had turned over to BuCor. —WITH  REPORTS FROM MELVIN GASCON AND JIGGER J. JERUSALEM