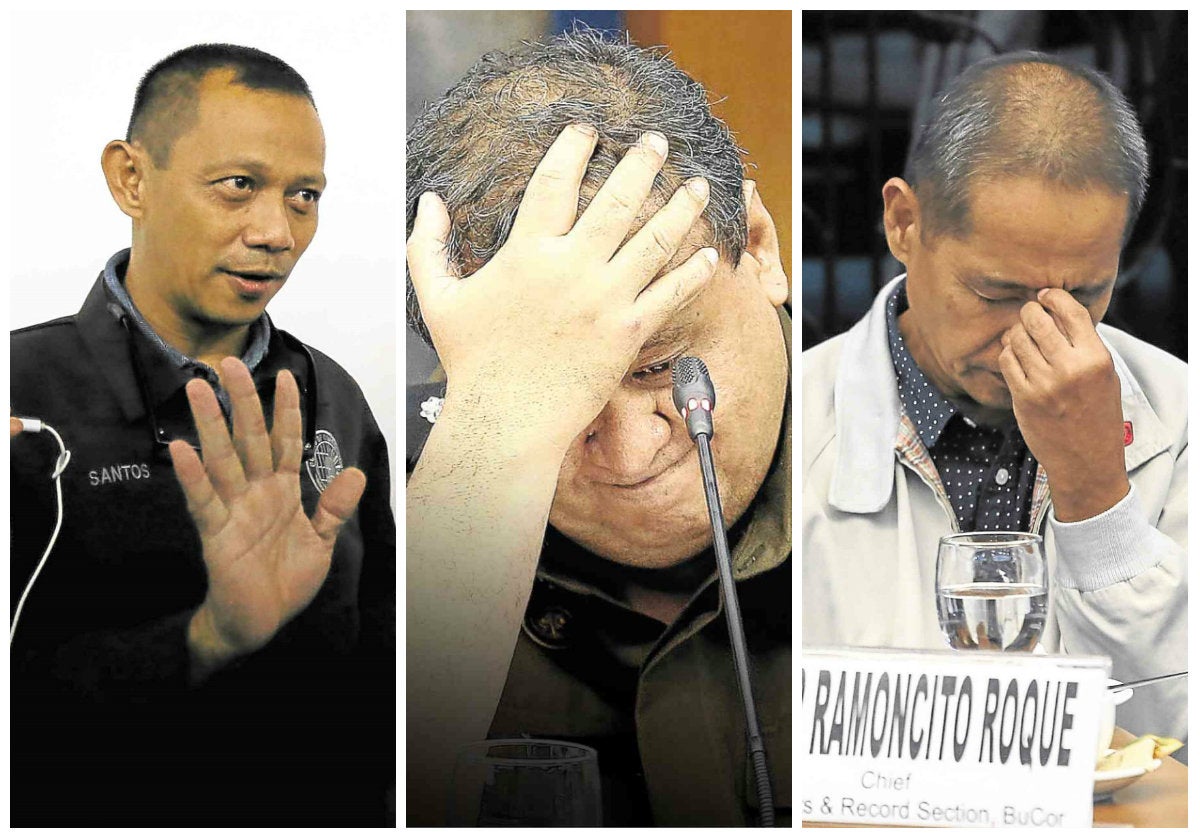 THREE MEN AND A HEADACHE For allegedly evading questions and lying to senators during a Senate inquiry into corruption at the state penitentiary, Bureau of Corrections legal division chief Fredric Santos (left), New Bilibid Prison medical officer Ursicio Cenas and documents section chief Ramoncito Roque are cited for contempt and ordered to be detained on Thursday. —PHOTOS BY LYN RILLON AND RICHARD A. REYES

MANILA, Philippines–There are other money-making ventures for corrupt officers at New Bilibid Prison aside from the payoffs for hospital passes and good conduct time allowances, according to a former official of the Bureau of Corrections (BuCor).

The other schemes include allowing prisoners to bring in women, run a 24-hour gambling operation and let in contraband under the cover of a construction project, said Rafael Ragos who served as Bilibid officer in charge from November 2012 to March 2013.

What started as a Senate inquiry into the good conduct law, Republic Act No. 10592, following the aborted early freedom for rapist-killer Antonio Sanchez and the erroneous release of over 2,000 convicts serving time for heinous crime also unraveled widespread corruption at the national penitentiary.

Duterte: Everyone must go

Speaking on Thursday night in Balanga City, Bataan province, President Duterte said everyone involved in prison corruption “will have to go.”

“For me, if [the convict’s release] is done in good faith, I won’t touch you. But if there were payoffs involved, that is another story,” the President said.

“I will hit you, not because the law was in the limbo, but because of corruption. You can expect that,” he said.

Ragos testified at the Senate hearing on Thursday that kidnapping the girlfriends of high-profile prisoners for ransom of as much as P200,000 was another moneymaker.

Construction projects within the Bilibid compound provide opportunities to bring in contraband like alcoholic drinks and cigarettes, Ragos said.

Cell phones are sold by BuCor employees to the inmates, he added.

Ragos also said a friend, who is a caterer, had to pay P800,000 monthly allegedly to the BuCor director to continue providing catering services to the agency.

He said BuCor officials also make extra money by granting special requests, such as an extended stay by a female visitor, or holding a party, complete with entertainers hired from the outside.

Ragos also said he had learned that whenever a new BuCor official takes office, money is collected from inmates to give to this official, whether the official takes it or not. In his case, no money had reached him, but heard that collections were made.

Once, when he summoned drug trade convict Amin Boratong for a meeting to discuss peace and order at the penitentiary, Boratong tried to give him a ring worth P600,000 because he had no cash.

“When you summon a high-profile inmate, they really bring money,” Ragos said, adding that he refused to accept the ring.

BuCor legal chief Fredric Santos also told the senators that there really was corruption at Bilibid as guards developed close ties with the inmates.

An “unholy” alliance would eventually be formed over various favors, and when officials suspect the guards have been compromised, they would transfer them. The problem was the replacement guards could not perform their duties.

Few inmates were prepared to break the “omerta,” or code of silence, and those who “sing” could end up dead in their sleep or hanging in their cell, Santos added.

Santos, however, was cited for contempt and ordered detained at the Senate along with documents section chief Ramoncito Roque and Bilibid medical officer, Dr. Ursicio Cenas, at the instigation of Sen. Ronald dela Rosa for “continuously evading and lying” to the justice committee, which called the hearing.

“If we keep on allowing this to happen, we would seem useless,” Sen. Panfilo Lacson said, backing Dela Rosa.

Santos on Thursday insisted that he had not known about inmates paying to be released through the good conduct law, saying only that he knew Republic Act No. 10592 granted good behavior credits automatically.

Roque, who faced allegations that he received payment to fast-track the release of an inmate through the law, said he did not accede to requests to free an inmate.

His colleagues, Corrections Insp. Maribel Bansil and Corrections Officer 3 Veronica Buño, who had denied involvement in the scheme, were not among those cited for contempt as the Senate was waiting for the results of an investigation by the National Bureau of Investigation, according to Lacson.

Cenas, who allegedly allowed convicted drug lords to overstay at the Bilibid hospital, insisted that he was just doing his job.

He was the doctor who approved in most cases the lengthy confinement of convicted drug lords, staying in the relatively more comfortable and less strict confines of the prison hospital, according to Jose Galario Jr., a former mayor of Valencia town in Bukidnon province who is serving time for graft.

Galario said he closely observed the goings on inside the hospital where he was also confined after he had heart bypass operation and a kidney transplant.

He said the drug lords could have been treated for their illnesses in one week but stayed from four to eight months “for money considerations.”

Galario admitted, however, that he did not see the payments made to Cenas as these were likely done in the doctor’s office.

Cenas denied the allegation and said he based his decision on the evaluation of the nurse assigned to Bilibid’s Building 14 where the maximum security inmates were held.

Galario said one section of the hospital, Ward 3, also was used as a “communication center” where the drug lords “engaged in business activities.” One of them, whom he identified as “Boy Buwaya,” used Ward 3 in March or April this year, he said.

The others who used the hospital to continue their transactions were a certain “Commander Chacha,” his partner Louie Castro, alias Diablo, an alias Allan, an alias Joseph, an alias Tata, a Rodel Castillano and a pastor, Noel Fernandez, he said.

Galario also said Buwaya was known to have a girlfriend in the hospital, nursing attendant Meryl Benitez, who he believed was one of his drug mules.

Benitez, who was at the Senate, denied the allegation.

Galario also said the drug lords bring along with them their lackeys, who feign sickness, to act as aides or lookouts when conducting their business.

Galario believes Cenas accepted payments from the drug inmates as he and his daughter had paid P1,000 to the doctor to ask for a medical abstract or other documents.

Responding to the allegation, Cenas said Galario and his daughter, Greizl Fernandez, had insisted that he take the money despite his refusal. He said they left the money on his desk.