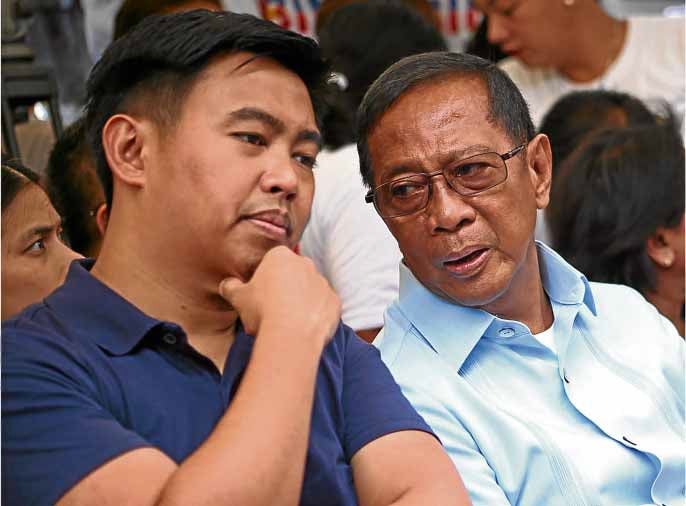 MANILA, Philippines – The Sandiganbayan has denied the bid of former Vice President Jejomar Binay and son ex-Makati Mayor Junjun Binay to dismiss graft cases against them which stemmed from the controversial Makati City parking building.

In the resolution released by the Third Division on September 3, the court said Binay Sr.’s claim that the court should stop hearing the case until the Commission on Audit (COA) has finished answering his appeal on the notice of disallowance (ND) does not have any merit.

Binay insists that if COA sets aside its original ruling, it may be in direct conflict with the original charge, which was based on the COA report.

However, Presiding Justice Amparo Cabotaje-Tang who penned the resolution cited a previous Supreme Court (SC) decision, which said that the probe and charges made by the Office of the Ombudsman should not be affected by COA reports, even if it stemmed from COA’s findings.

“Therefore, with or without the report from COA, the Ombudsman can conduct a preliminary investigation.  This Court has declared that the findings in a COA report or the finality or lack of finality of such report is irrelevant to the investigation of the Office of the Ombudsman in its determination of probable cause,” Sandiganbayan said, citing the SC ruling.

The Binays, along with other Makati city government officials, were charged with graft and malversation for the allegedly overpriced Makati City parking building, which was priced at P2.8 billion.

The older Binay was charged for the first three phases of the building’s construction, as he was mayor when the phases occurred, while Junjun is facing raps for the remaining two phases.

The Third Division also stressed that even if COA’s report absolved the public officials of any wrongdoing, he or she may still be convicted based on the Office of the Ombudsman’s charges.

“To reiterate, the interest of the COA is solely centered on the administrative aspect of a public official’s liability. In fact, as held by the Supreme Court, even in instances when a public official’s account had passed in audit, the latter may still be held criminally liable if there are other pieces of evidence establishing the latter’s culpability,” the court said.

Junjun Binay claimed that the Ombudsman committed forum shopping, or the filing the same cases in different jurisdictions or courts, as the parking building issue supposedly spouted three issues — his suspension order released by the Ombudsman, the COA investigation, and the Sandiganbayan trial.

Cabotaje-Tang denied this assertion from Binay.

“It is exceedingly clear that the prosecution did not commit forum shopping when it indicted the herein accused-movants in connection with the alleged anomalies in the construction of the Makati City Hall Parking Building II,” the resolution said.

“To be sure, the three (3) cases that were mentioned by accused Binay, Jr. in support of his allegation that the prosecution committed forum shopping […] merely pertain to the application of the three-fold responsibility of government officials for alleged violation of their sworn duty,” it added. /je