A SPECIAL audit has revealed that the Makati City Parking Building II project was not only allegedly overpriced and its bidding rigged, but it was also riddled with various purported anomalous practices, according to the Commission on Audit (COA).

A 57-page COA report showed statements of receipts and expenditures were “bloated,” misrepresentation of infrastructure projects worth P14 billion from which funding for the building was allegedly taken; all five phases of the construction from 2007 to 2011 were purportedly not covered by the city’s annual procurement plan (APP); advance payments to favored contractor Hillmarc’s Corp. prompted the alleged rigged bidding; and budgets were said to have been increased after contracts were awarded.

The report by a three-member team, a copy of which was obtained by the Inquirer, said the construction of the building, started when Vice President Jejomar Binay was still mayor of Makati City and continued through the administration of his son, dismissed Mayor Junjun Binay, started even without an APP in violation of the procurement law.

“No government procurements shall be undertaken unless it is in accordance with the approved APP of the procuring entity,” the report said.

The alleged overpriced P2.28-billion parking building became the basis for a plunder complaint filed against the Vice President and the firing of the younger Binay by the Office of the Ombudsman.

The special auditors also stated that supplemental budgets for various infrastructure projects during five phases of construction from 2007 to 2011 amounting to P14.048 billion funded the P2.2-billion parking building. 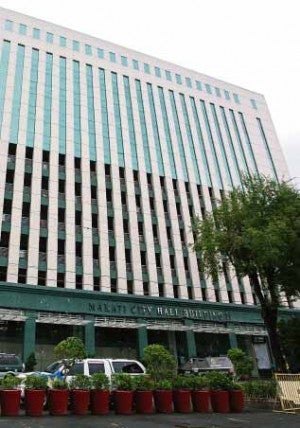 During five phases of the building construction taken from either loans from Land Bank of the Philippines, unappropriated surplus, or savings of the executive budget were misrepresented. These included the P2.2 billion allocated for the Makati parking building.

It also said that the statements of receipts and expenditures for 2007 and 2008 appeared bloated by a total of P3.54 billion—P1.24 billion for 2007 and P2.3 billion for 2008—representing proceeds of loans from LandBank that were verified to be not actually released during those years, but only in 2010, in violation of the Local Government Code.

“No ordinance providing for a supplemental budget shall be enacted except when supported by funds actually available as certified by the local treasurer,” the report said. This referred to the amount of money actually collected as certified by the local treasurer during a given fiscal year, which was over and above the realized estimated income of that year.

“Moreover, the bloated figures appear to be made to conceal the fact that various projects, including the Makati City Parking Building II funded through loans on 2007 and 2008, were implemented and paid even without actual release of the loan.”

Disbursements of Phases I and II of the building totaling P830,957,960.56 net of taxes paid to Hillmarc’s were charged against the 2007 and 2009 capital outlays for other projects that should have been from the LandBank loan, the report said.

It also said the city entered into a contract of architectural and engineering services for the parking building with MANA Architecture and Interior Design amounting to P11,974,000 even with the required appropriation and payments were made without proof of accomplishments.

Former COA Chair Grace Pulido Tan previously stated that apart from regular auditors, the commission would also seek the assistance of experts to conduct a new audit of the parking building.

The alleged overpricing of the 11-story building was the subject of a Senate inquiry and was blamed by Binay, who is running in the 2016 presidential election, as the cause of the drop of his popularity ratings and described the allegations as part of a demolition job against him.