De Lima to Panelo: Don’t use Aquino admin as ‘scapegoat’ in GCTA mess 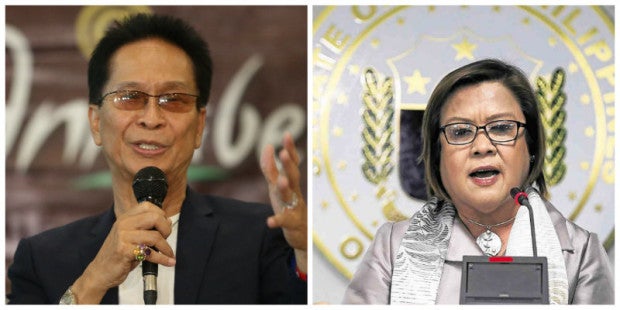 Panelo had blamed De Lima, a former justice secretary, and former Interior Secretary Mar Roxas for the mess created by the Implementing Rules and Regulations of the GCTA Law pending in the previous administration.

He also claimed the GCTA law’s IRR paved the way for the release of inmates earlier convicted of heinous crimes.

But De Lima said she was not surprised at Panelo’s tactic of blaming the previous administration, noting such ploy was meant to divert public attention from his involvement in the aborted release of his former client, ex-Calauan, Laguna Mayor Antonio Sanchez.

The senator added that Panelo’s move is expected because the Duterte administration has been known in using the previous government as “scapegoat” to avoid accountability on pressing issues.

According to De Lima, Panelo resorted to finger-pointing to cover his alleged involvement in the release of Sanchez, who was sentenced to seven life imprisonment for the rape-slay of Eileen Sarmenta and murder of Allan Gomez, both students of the University of the Philippines Los Baños, in 1993.

But Panelo clarified that he merely “referred” the letter to the BPP and did not recommend the grant of executive clemency to Sanchez.

Duterte also defended his spokesman, saying that Panelo did the right thing and did not violate the law.