Parole board chief: Panelo ‘referred’ Sanchez pardon bid to me 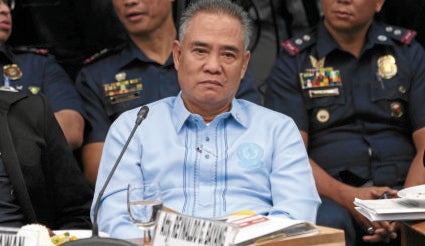 Reynaldo Bayang, executive director of the parole board, disclosed Panelo’s action at the resumption on Tuesday of the Senate inquiry into the aborted release of Sanchez, who is serving seven 40-year terms for the rape and murder of University of the Philippines Los Baños student Eileen Sarmenta and the murder of her friend Allan Gomez in 1993.

Public outrage and President Duterte’s opposition forced the Department of Justice and the Bureau of Corrections (Bucor) to halt the processing of Sanchez’s release for good behavior.

Quizzed by Sen. Richard Gordon, a hesitant Bayang told the Senate inquiry that Panelo wrote him on Feb. 26 endorsing a letter sent to the presidential spokesperson on Feb. 8 by one of Sanchez’s children, Marie Antonelvie Sanchez, regarding her father’s application for executive clemency.

“What he did is an inappropriate conduct,” Gordon told reporters after the hearing called by the committee on justice and human rights, which he chairs.

“I think he was guilty of bad judgment. But he did not say that ‘I’m exerting my influence upon you…’ I fault him for bad judgment … He just endorsed the letter,” he said.

“[That’s] impropriety … He should’ve known better,” Gordon added. “There’s nothing illegal in what he did … But he’s a former lawyer [of Sanchez] and he’s now in a position of influence.”

In Malacañang, Panelo, who served on Sanchez’s legal team in the Sarmenta-Gomez case, denied that he recommended the release of Sanchez from prison.

Speaking to reporters, Panelo maintained that he did not intervene in the Sanchez family’s bid for executive clemency for the former mayor.

Panelo was responding to an Inquirer reporter’s tweet on Tuesday that had been retweeted by Inquirer.net saying that he “recommended executive clemency” for Sanchez.

“I never recommended anything,” Panelo said, explaining that his office refers requests from the public to the agencies concerned.

“[I]f they respond to us, we acknowledge the receipt of their response and thank them for taking action on the matter. That is the job of this office with respect to all letters received by it,” Panelo said.

He said Inquirer.net “unwittingly, erroneously and even maliciously reported” his referral letter as a “recommendation letter.”

Panelo said he “demanded rectification” as the tweet was “reeking of irresponsibility” in news reporting.

He stressed that his office does not have the authority to find merit in the Sanchezes’ request or their petition for executive clemency.

“We do not have the authority. Our job is to refer it to the proper agencies for their evaluation and their action in accordance with the law,” Panelo said.

In his single-page letter, Panelo asked Bayang to “update us for record purposes and for whatever action this office may want to undertake, consistent with law and the policy of the President for good governance.”

“In line with the President’s commitment for good governance, transparency and immediate action on matters that affect the welfare of the people, we are referring this matter to your good office for your evaluation and whatever appropriate action you may want to undertake under the premises,” he said.

In the Senate, Bayang told the justice committee that despite Panelo’s letter, he jettisoned the request of Marie Antonelvie.

In its Feb. 27 resolution, the parole board said it denied the clemency petition because of “the gravity of the offenses he had committed.”

In a Twitter post after the hearing, Gordon said: “I commend the [parole board] for not letting the recommendation of Secretary Panelo sway your decision to reject Sanchez’s application.”

Senate Minority Leader Franklin Drilon, a former justice secretary, said that Panelo’s letter seemed to be a “a plain endorsement, but certainly his signature [as chief presidential legal counsel] carries a lot of weight.”

He also noted that Panelo’s correspondence contained the official letterhead of his office as a ranking Malacañang official.

“On the surface, it appeared that the letter is a plain endorsement. But given the fact that it is in the letterhead of the presidential legal adviser and … that he is the presidential spokesman, that letter, certainly, has some weight,” Drilon said in an interview after the hearing.

Asked about the family’s tack to bring the matter to Malacañang, he said: “It’s a little unusual. They should file their motion for reconsideration with the [Board] of Pardons and Parole.”

“It says a lot,” Lacson said, referring to Panelo’s letter. He noted that even retired Judge Harriet Demetriou, who handed down the decision in the Sarmenta-Gomez case in 1995, suspected that Panelo tried to use his influence to free his former client.

“I think we deserve an explanation from him … [Panelo] has a lot of explaining to do. Now it’s up to him to convince the people … that what he did was proper,” he said.

Lacson and Drilon both said that while it is possible that Panelo’s office is routinely endorsing similar requests, his being a former lawyer for Sanchez gave a different tone to the letter.

Questioning the decision of the BuCor to recommend Sanchez’s early release for supposed good behavior, Gordon asked the former mayor’s family if they had sought the help of politicians and other influential people to free him ahead of the completion of his seven 40-year terms.

When Ave Marie Tonee Sanchez-Alcid, Sanchez’s eldest daughter, answered that they did not, Gordon asked Bayang if the parole board had received letters from people supporting Sanchez’s application for executive clemency.

Elvira Sanchez, the former mayor’s wife, then intervened, claiming her daughter had no knowledge about it since it was she who had been following up the application of her husband.

“Attorney Reynaldo Bayang asked me to ask recommendations from some of our friends. That’s what we did,” Elvira said.

Explaining his actions, Bayang said he just wanted to help the former mayor’s family in firming up his request for clemency.

Gordon told Bayang, “We will have to delineate clearly [in the law] that you cannot accept recommendations from politicians or from other people, that you just have to determine [the basis of] conditional pardon or clemency.”

Bayan Muna Rep. Ferdinand Gaite said on Tuesday that the House of Representatives should summon Panelo to explain his role in the aborted release of Sanchez. —With reports from Julie M. Aurelio and DJ Yap