CHARLESTON, S.C.  – Weakened but still deadly, Hurricane Dorian crept up the Southeastern coast of the United States on Wednesday and millions were ordered to evacuate as forecasters said near-record levels of seawater and rain could inundate Georgia and the Carolinas. 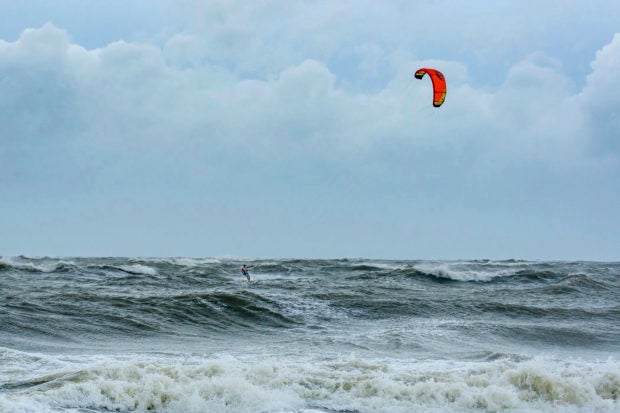 The storm, which ravaged the Bahamas with more than a full day of devastating wind and rain, had weakened substantially — from a Category 5 storm to a Category 2 — but still had dangerously high winds and threatened to swamp low-lying regions from Georgia to southeastern Virginia as it moved northward.

“We will experience hurricane-force winds, in at least gusts,” South Carolina Gov. Henry McMaster said at a news conference Wednesday. Even if the hurricane doesn’t end up hitting the state directly, he said, “there’s still going to be wind and water and if you’re in the coastal area, that water can be treacherous.”

Dorian appeared likely to get dangerously near Charleston, which is particularly vulnerable since it is located on a peninsula. A flood chart posted by the National Weather Service projected a combined high tide and storm surge around Charleston Harbor of 10.3 feet (3.1 meters); the record, 12.5 feet (4 meters), was set by Hugo in 1989.

Stores and restaurants were boarded up with wood and corrugated metal in the city’s historic downtown, and about 830,000 people were under mandatory evacuation orders on the South Carolina coast. More than 400 people were in state-operated shelters statewide, and more were expected.

Mark Russell, a homeless U.S. Army veteran, said he had been in a shelter since Monday awaiting slow-moving Dorian.

“Once the rain comes and the wind hits, it’s going to blow left, right, in and out, and there’s not really a place that you can find” to avoid it, said Russell, 63.

In North Carolina, where authorities said an 85-year-old man died after falling from a ladder while getting ready for the storm, Gov. Roy Cooper warned about the threat of storm surge and flash flooding from heavy rains. The Outer Banks were particularly vulnerable.

“We are very worried, especially about the barrier islands getting cut off if we have these storm surges at the same time as … the high tides,” Kemp said.

Duke Energy said Dorian could cause more than 700,000 power outages in eastern regions of North Carolina and South Carolina, and Georgia Power said about 2,800 homes and businesses were already without electricity.

The Navy ordered ships at its huge base in Norfolk, Virginia, to head out to sea for safety, and warplanes at Langley Air Force Base in Hampton, Virginia, were being moved inland to Ohio.

Weaker but bigger since it slammed the Bahamas with 185 mph (295 kph) winds earlier this week, Dorian was moving along Florida’s northeastern coast at 8 mph (13 kph) late Wednesday afternoon. Forecasters said it had maximum sustained winds of 110 mph (177 kph) and was centered about 150 miles (241 kilometers) south of Charleston.

A hurricane warning covered about 500 miles (805 kilometers) of coastline, and authorities warned about 3 million residents to get away before the water and wind rose with Dorian’s approach.

The acting administrator of the Federal Emergency Management Agency, Peter Gaynor, said 4,000 federal responders; 6,000 National Guard members; and 40,000 utility workers were on standby for the hurricane.

“We are ready to go,” Gaynor said. “We’ll follow Dorian up the coast until it is not a threat to the U.S.”

In Florida, initially projected to take a direct hit from Dorian, there was widespread relief and gratitude on Wednesday after the storm passed the state from a relatively safe distance offshore.

“We’re lucky today,” said Ryan Haggett, kitchen manager at the Oceanside Beach Bar and Grill, at Flagler Beach on the state’s central coast. Haggett and others were removing storm shutters they had placed over the restaurant’s windows and planned to serve dinner Wednesday night.

“This storm was much less than what happened two years ago, three years ago with Irma and Matthew,” Haggett said, referring to the deadly storms that hit in 2017 and 2016. “They were the worst.”

With the threat to Florida easing and the danger shifting northward, Orlando, Florida’s international airport reopened, as did Walt Disney World and Universal. Dorian forced Disney Cruise Line to cancel one trip and delay the return of another ship to Port Canaveral, Florida.

One resident in the state died while preparing for the storm Monday evening, when Dorian’s path was still projected to include central Florida. Joseph Walden, 56, was sitting on a tree limb and using a chainsaw to trim other limbs in the Orlando suburb of Ocoee when one of the cut limbs broke free and struck him, pushing him to the ground, Ocoee police said in a news release. He was pronounced dead at a hospital. /gsg