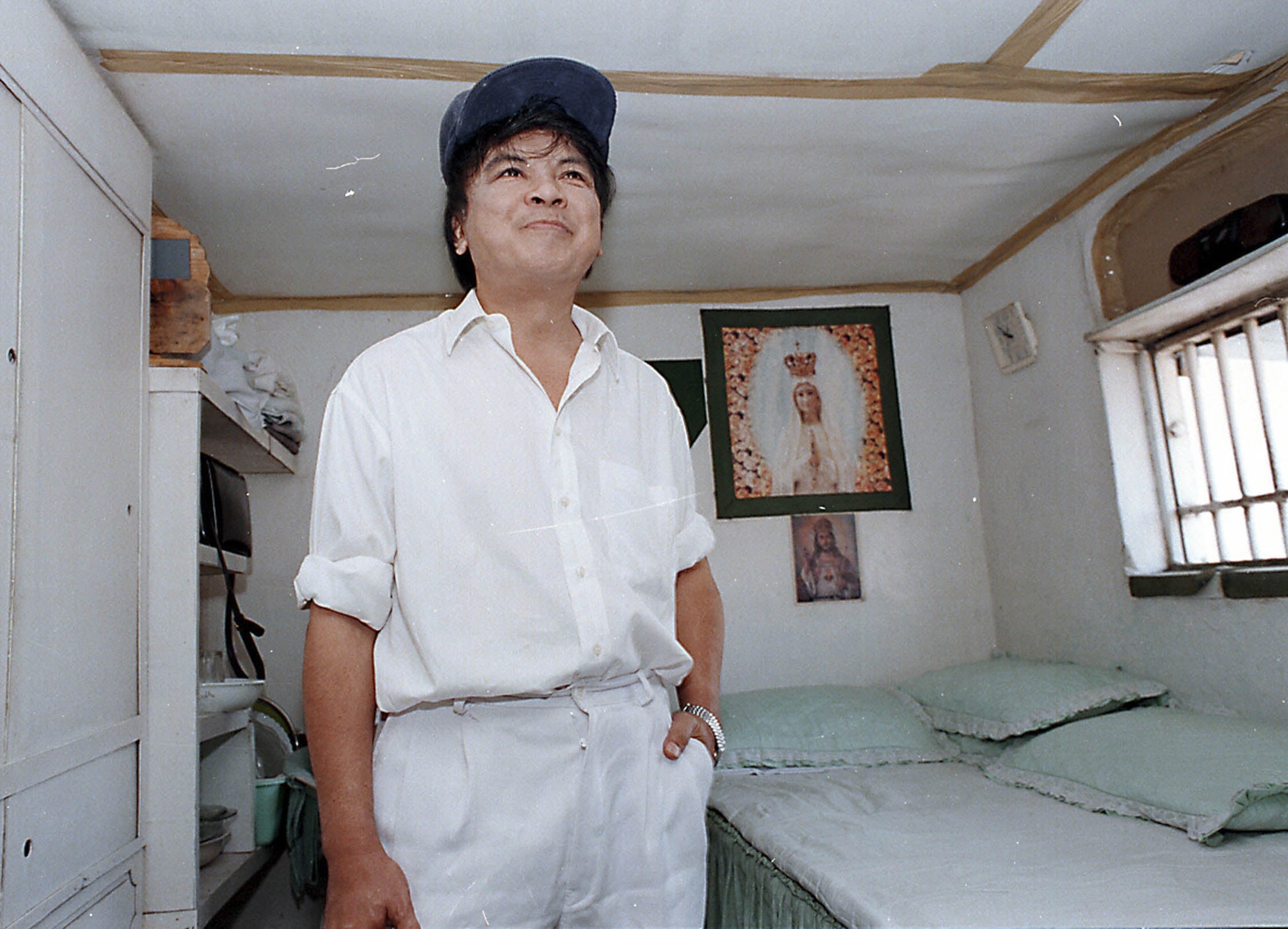 MAMA MARY Murder and rape convict Antonio Sanchez shows his prison cell where the image of the Virgin Mary, towhom he says he is devoted, is prominently displayed in this February 1999 photo, four years after he and six of his aides were sentenced to seven 40-year prison terms. —INQUIRER PHOTO

Fear, disbelief and painful emotions gripped the family of murder victim Allan Gomez when media reports came out that the man responsible for his death and the rape-slay of his college friend 26 years ago might soon walk out of prison.

“It’s like my heart is being crushed,” OJ Gomez told the Inquirer in an online interview on Wednesday.

OJ, 47, is an older brother of Allan, a University of the Philippines Los Baños (UPLB) student who was killed on orders of then Mayor Antonio Sanchez of Calauan, Laguna, in 1993.

In one of the heinous crimes that shocked the nation in the 1990s, Allan and Eileen Sarmenta were abducted by Sanchez’s aides, who presented the girl as a “gift” to the mayor. Sanchez raped Sarmenta and then his aides took turns in abusing her after they shot Allan dead. They also later shot Sarmenta in the head with an Armalite rifle.

Sanchez, now 73, and six of his aides were each sentenced to seven 40-year prison terms by then Pasig Regional Trial Court Judge Harriet Demetriou.

“We are all fearing for our lives. I also fear for the town of Calauan and their townspeople,” OJ said. “We are trying to move on but we do remember them [Allan and Eileen] always.”

Sarmenta’s mother, Clara, said in a television interview that all the pain and anguish she felt right after her daughter’s brutal killing came rushing back after learning about Sanchez’s impending release.

“Being the mother of the victim, I cried and I was deeply saddened. All the pain that I felt during the trial came back,” she said in Filipino, her voice cracking.

Clara also said the victims’ families were not interested in whatever they could collect from Sanchez in damages.

She said her family hasn’t consulted their lawyer but that they intended to appeal Sanchez’s release with the Board of Pardons and Parole.

The possible return of Sanchez to Calauan, a second-class municipality popular for its pineapples, also worried its current mayor, George Berris.

“It will create fear not only among residents of Calauan but also in UPLB,” Berris said in a phone interview on Wednesday.

He said Sanchez still enjoyed support from about 8,000 “loyalists” from the former mayor’s home village of Kanluran.

In the May elections, Sanchez’s eldest son, Dong, ran but lost to Berris. Another son, Allan, also lost in the race for vice mayor, but his daughter, Amty, won a seat in the municipal council.

Calls to Dong Sanchez’s phone for comment were unanswered.

Justice Secretary Menardo Guevarra on Tuesday said Sanchez, as well as thousands of other convicts, might soon be released under a 2013 law that credited good conduct during imprisonment.

On Wednesday, he said there was no need for anyone, like former Sanchez lawyer and now presidential spokesperson Salvador Panelo, to seek the former mayor’s release under Republic Act No. 10592.

Lawyer Filemon Nolasco, who represented the Gomez family at Sanchez’s trial, urged the Department of Justice (DOJ) to take the gruesomeness of the crime into consideration before it proceeds with Sanchez’s release.

“We are trying to determine whether there is basis for granting [Sanchez] whatever the DOJ secretary said is entitled to him. But I think, we have to study this carefully. This was not an ordinary crime or an ordinary case. We ask that the DOJ review the case,” Nolasco said.

He said the Gomez family was willing to forgive Sanchez but they still could not because of the former mayor’s continuous refusal to admit his guilt.

“How do you forgive a person who still insists he is not guilty? He is even saying that he had nothing to do with the case. That’s something that the family could not accept,” Nolasco said in a phone interview.

Guevarra on Wednesday said he had “no reason to believe that the intervention of any person, including Secretary Panelo, will be necessary” in freeing any prisoner under the rules set by the 2013 law.

Panelo also doused speculations that he may have had a hand in Sanchez’s impending release, saying he left his client’s legal team even before the former mayor appealed his conviction.

“I wish him well,” he said of Sanchez in a phone interview with reporters. Lawyers whose clients will be given a new life after their release will be happy, he added.

Guevarra said the Bureau of Corrections (BuCor) recomputed all the prisoners’ good conduct time allowance (GCTA) beginning with those who were sentenced in 1993, after the Supreme Court ordered last June to apply the law even to those who were convicted before it was passed in 2013.

The law expanded the application of GCTA to reduce a convict’s prison term.

‘Law, not Duterte, freed them’

BuCor Director Nicanor Faeldon said around 200 prisoners would be released per day, according to Guevarra.

“If they are released because they have served their reduced sentence, that’s for good. The reduced sentence is a reward for good conduct, not for any other reason,” he added.

Guevarra said he hoped the public would understand that “it’s the law and the Supreme Court ruling that freed them, and not President Rodrigo Duterte” nor even him as secretary of justice.

In a unanimous decision penned by Associate Justice Diosdado Peralta on June 25, the Supreme Court ordered the retroactive application of the grant of GCTA for prisoners who showed good conduct, rendered study, teaching and mentoring service, and who showed loyalty.

Not an executive clemency

There is no requirement to publish or notify anyone about the impending release of the prisoners “because this is not a case of executive clemency; this is a case of sentence duly served,” Guevarra said.

Under RA 10592, all prisoners, including those under preventive imprisonment may qualify for the reduction of their sentences.

Passed on May 29, 2013, the law increased the number of days that may be credited for GCTA, and allowed the additional deduction of 15 days for each month of study, teaching, or mentoring service.

It also expanded the special time allowance for loyalty and made it applicable even during preventive imprisonment.

The original implementing rules and regulations issued on March 26, 2014 ordered the prospective application of GCTA.

Del Rosario, however, said Sanchez had to wait in line, as the bureau was following a “first in, first out” policy.

He said Sanchez was aware that he could be walking out of prison soon and that the convict was doing well inside New Bilibid Prison’s maximum security compound.