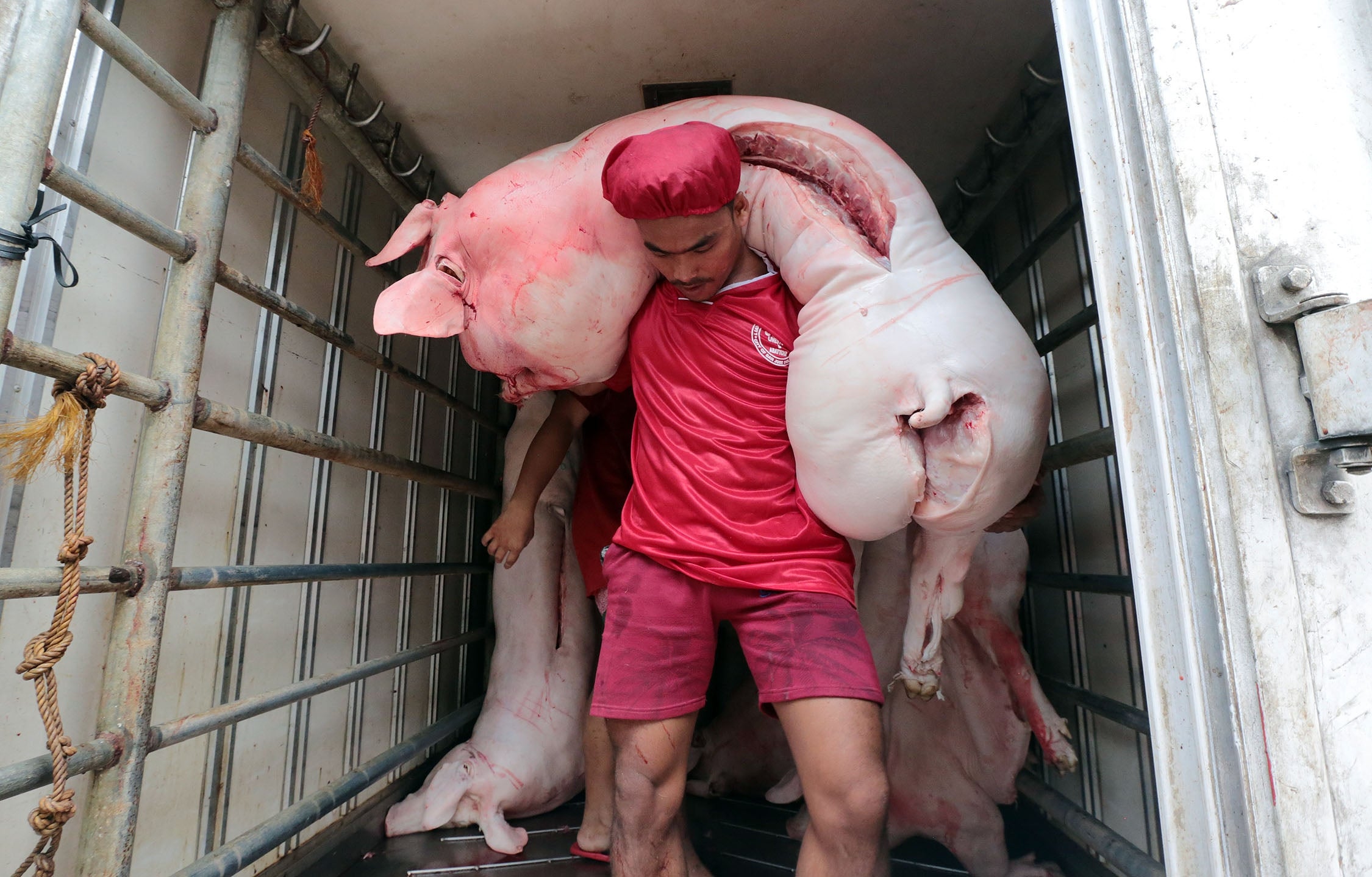 SAFE TO EAT Inspected pork is delivered to meat vendors at Commonwealth Market in Quezon City on Wednesday. The Bureau of Animal Industry urges hog raisers to improve security measures to keep African swine fever out of the country. —GRIG C. MONTEGRANDE

MANILA, Philippines — The Department of Agriculture (DA) has ordered strict certification of live animals and processed pork products that are to be moved and traded across the country as fears rise that  African swine fever has hit hogs in the province of Rizal.

Reports of hog deaths in Rizal in recent days have pushed some other hog-raising provinces to take measures to keep their livestock free of the disease.

Batangas has set up 17 animal inspection points and deployed inspection teams to check pig farms for any signs of African swine fever.

Bohol has banned the importation of pigs and pork products to keep the disease out of the province.

African swine fever, which is incurable in pigs but harmless to humans, has spread rapidly across China, Vietnam and Laos.

The Philippine government believes the country remains free of the disease, but reports of pig deaths in Rizal in recent days have alarmed hog raisers and the agriculture department.

In a press conference on Wednesday, DA spokesperson Noel Reyes said the agency had sought help from local governments, the public and the Philippine National Police in monitoring movement of live pigs and pork products from suspect farms.

Reyes said these products must have veterinary health certificate, shipping permit and meat inspection certificate to ensure that they are safe.

On Monday, Agriculture Secretary William Dar said the agency had shipped blood samples to foreign laboratories to determine the cause of the recent pig deaths.

Afflicted pigs show loss of appetite, recumbency, and suffer from vomiting, skin hemorrhage and discoloration in the extremities.

Experts from the Bureau of Animal Industry said several diseases could be associated with these signs so confirmation was needed from better equipped laboratories to ascertain the presence of African swine fever in the country.

Industry groups are helping to keep the disease out of the country.

Rosendo So, chair of the Samahang Industriya ng Agrikultura, said his group was closely monitoring the entry of imported pork and pork products, strictly watching out for smuggled meat.

Some private groups have provided disinfectants and have been policing raisers who still use swill to feed pigs, said Chester Warren Tan, president of the National Federation of Hog Producers Inc.

In Batangas, Annie Lajarca of the provincial veterinary office on Wednesday said there was no confirmed case of African swine fever in the province and that the animal inspection points and livestock farm checks were just precautionary measures.

Gov. Hermilando Mandanas said Dar had directed him to take the measures, as Batangas, along with Bulacan province, was a top producer for the country’s P260-billion hog industry.

Lajarca said the Batangas hog industry was worth P5 billion, but “could be more than that.” She said the province was updating its master list of hog raisers.

In Bohol, Gov. Arthur Yap said he would issue a directive to the mayors to deploy inspectors to the ports to beef up the quarantine effort.

He said the provincial veterinary office would coordinate with the mayors, local agricultural officers and village livestock aides and technicians to heighten the monitoring of pig farms.

Bohol’s hog industry is worth P6 billion, he said.—With reports from Maricar Cinco and Leo Udtohan