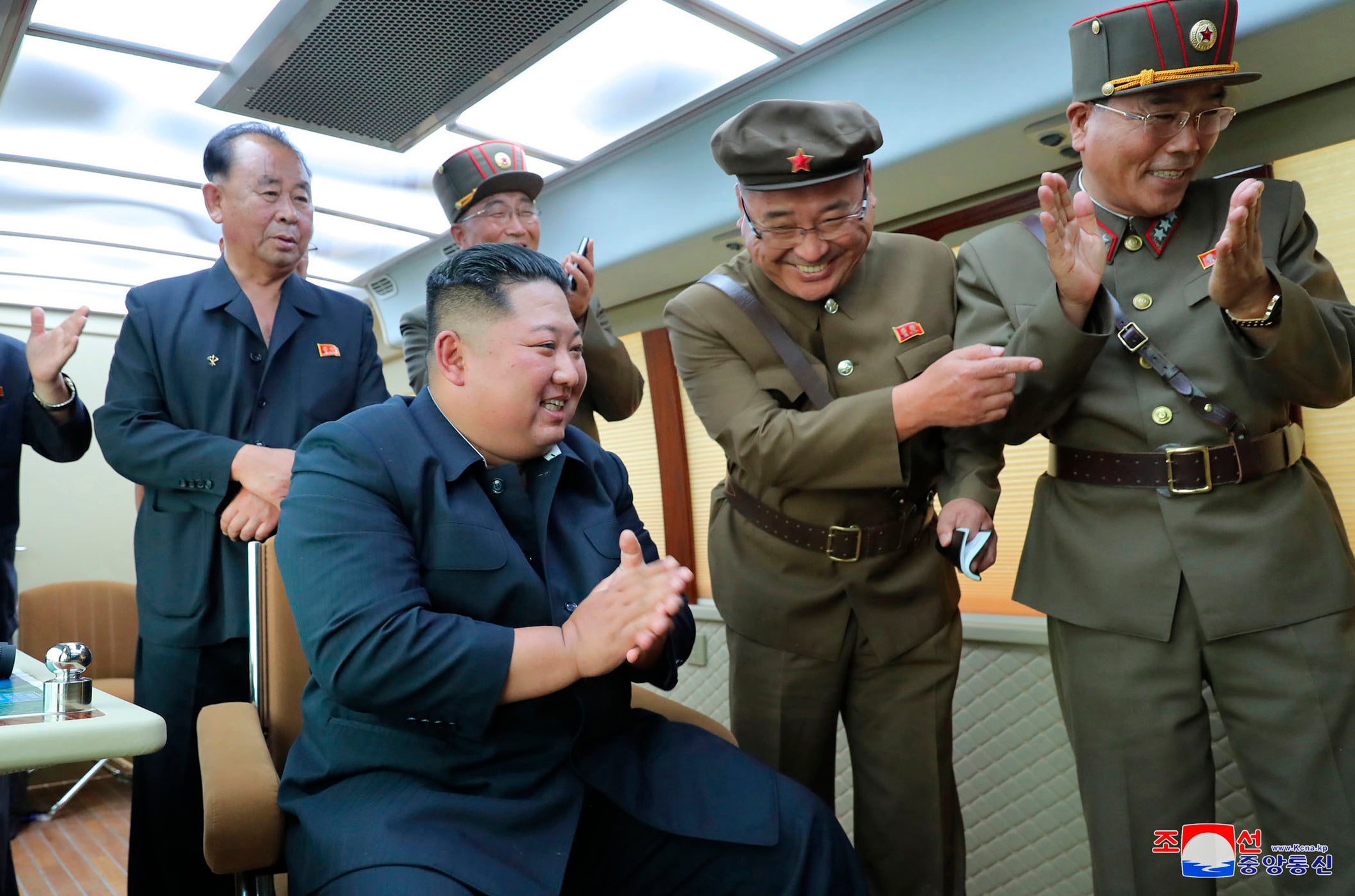 In this Friday, Aug. 16, 2019, photo provided Saturday, Aug. 17, by the North Korean government, North Korean leader Kim Jong Un, center, watches the test firing of an unspecified new weapon at an undisclosed location in North Korea. North Korea on Saturday said leader Kim supervised another test-firing of an unspecified new weapon that extended a streak of weapons demonstrations seen as an attempt to pressure Washington and Seoul over slow nuclear negotiations and their joint military exercises. The content of this image is as provided and cannot be independently verified. Korean language watermark on image as provided by source reads: “KCNA” which is the abbreviation for Korean Central News Agency. (Korean Central News Agency/Korea News Service via AP)

Pyongyang’s Korean Central News Agency said that following Friday’s launches, Kim expressed “great satisfaction” over his military’s “mysterious and amazing success rates” in recent testing activity and vowed to build up “invincible military capabilities no one dare provoke.” The report did not mention any specific comment on the United States or South Korea.

The launches were North Korea’s sixth round of tests since late July that revealed developments of a new rocket artillery system and two separate short-range mobile ballistic missile systems that experts say would expand its ability to strike targets throughout South Korea, including U.S. bases there.

KCNA did not describe what Friday’s weapons were or how they performed, but it said that the tests were successful and strengthened the military’s confidence in the reliability of the system.

“(Kim) said everyone should remember that it is the (ruling) party’s core plan and unwavering determination to build a powerful force strong enough to discourage any forces from daring to provoke us and to leave any opponent defenseless against our Juche weapons of absolute power even in situations of physical clashes,” the agency said, referring to the North’s national ideology of self-reliance.

South Korea’s military said earlier that two projectiles launched from the North’s eastern coast flew about 230 kilometers (143 miles) before landing in waters between the Korean Peninsula and Japan. The U.S. and South Korean militaries were analyzing the launches but didn’t immediately say whether the weapons were ballistic missiles or rocket artillery.

Experts say President Donald Trump’s repeated downplaying of the North’s launches allowed the country more room to intensify its testing activity and advance its short-range weaponry while it seeks to build leverage ahead of nuclear negotiations with Washington, which could resume after the end of ongoing allied military drills later this month.

The U.S. envoy for North Korea, Stephen Biegun, will visit Japan and South Korea early next week for talks on how to “further strengthen coordination on the final, fully verified denuclearization” of North Korea, the U.S. State Department said.

North Korea has ignored South Korean calls for dialogue recently and is seen as trying to force Seoul to make stronger efforts to coax major concessions from Washington on its behalf.

Hours before the latest launches, an unidentified North Korean government spokesperson used unusually blunt language to criticize South Korean President Moon Jae-in for continuing to hold military exercises with the U.S. and over his rosy comments on inter-Korean diplomacy, and said Pyongyang has no current plans to talk with Seoul.

Moon, in a televised speech on Thursday, said a momentum for dialogue remains alive despite the series of “worrying actions taken by North Korea recently” and called for Pyongyang to choose “economic prosperity over its nuclear program.”

The spokesperson also criticized South Korea’s recent acquisition of advanced U.S.-made fighter jets and said it would be “senseless” for Moon to believe that inter-Korean dialogue will automatically begin after the end of the ongoing U.S.-South Korean drills.

The North had recently said it would talk only with Washington and not Seoul, and that inter-Korean dialogue won’t resume unless the South offers a “plausible excuse” on why it keeps hosting military drills with the United States. Seoul’s Unification Ministry, which deals with inter-Korean affairs, criticized the North Korean statement, saying it wouldn’t help efforts to improve relations.  /muf