CHR to gov’t: Best reply to activism is to act on grievances | Inquirer News

CHR to gov’t: Best reply to activism is to act on grievances 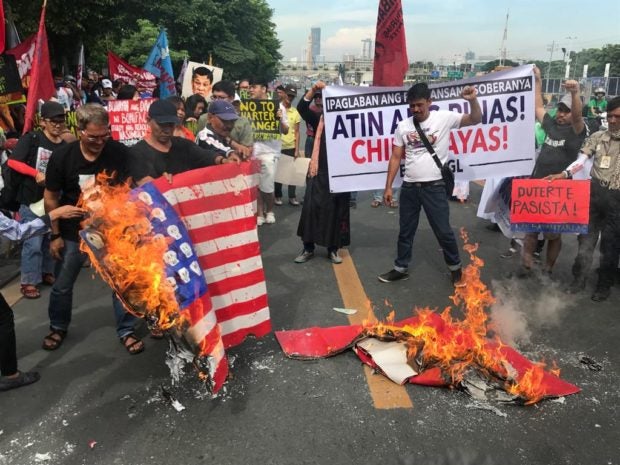 Protesters burn flags of China and the United States during a rally at the CHR office in Quezon City on Monday, July 22, 2019, the day President Rodrigo Duterte delivered his fourth State of the Nation Address. (Photo by CATHRINE GONZALES / INQUIRER.net)

MANILA, Philippines – The Commission on Human Rights (CHR) challenges the government to address grievances brought up by legitimate organizations instead of going after activists.

“In the end, the best response to dissent is to effectively address legitimate grievances, and demonstrate that the government is working to the best interest of every Filipino, thereby also dispelling any call to topple any administration,” De Guia said in a statement on Thursday.

De Guia issued the statement after Interior Secretary Eduardo Año floated the idea of restoring the Anti-Subversion Act (Republic Act No. 1700) to curb the alleged recruitment of children by the communist New People’s Army (NPA).

But according to De Guia, there is a danger in bringing back the law as individuals with contrary opinions may be considered subversives. Restoring the Anti-Subversion Act would also mean that affiliation with the Communist Party of the Philippines (CPP) would be illegal.

“We strongly warn the government of the possible dangers of framing activism or merely having a contrary opinion as an automatic expression of wanting to overthrow the government,” she noted. “This is a very limited view of how a democracy works.”

“We remind the government that mere association — in this case, to any leftist organization — is not a crime,” she added. “And being part of an organization and believing in the principles they espouse is an exercise of the right to freedom of thought, assembly, and association and may affect all other rights when curtailed, such as the right to free speech, expression, and movement among others.”

Accusations of recruiting “child warriors” were bolstered when Sen. Ronald dela Rosa, a former Philippine National Police (PNP) chief, presented parents who claimed that their children had been kidnapped and brainwashed into fighting against government forces.

However, a student who was allegedly taken away by party-list group Anakbayan showed up to prove that she was never kidnapped and that her decision to move away from home was a personal one.

Earlier, the spokesperson of the Armed Forces of the Philippines (AFP), Brig. Gen. Edgard Arevalo, said there should be no distinction in the treatment of CPP, NPA, and the National Democratic Front (NDF), as they believe that the actions of the CPP were coordinated with the armed movement.

The resurrection of the Anti-Subversion Act has been rejected by critics for the same reasons that De Guia mentioned. Even Justice Secretary Menardo Guevarra said that affiliation with CPP could not be considered a crime unless they venture into the armed struggle.

“Activism as a means to bring about social change is a crucial facet of a democracy,” De Guia stressed. “It can be manifested through demonstrations and protests to contest an issue or advocate for a cause. It is a constitutionally-protected right, especially when used to petition the government for redress of grievances.”

She also reminded government officials that laws were put in place to ensure that those who would take a step further in promoting ideologies — like taking up arms — would be sanctioned.

“But, at the same time, should there be any wrong committed in furtherance of a belief, there are already laws in place that penalizes these acts,” De Guia said.

“We cannot have a government that operates merely on suspicion and disadvantages its citizen for exercising a right that they are entitled to,” she added “There must always a balance between upholding national security and respecting human rights. Laws are set to protect our rights — not violate them.”