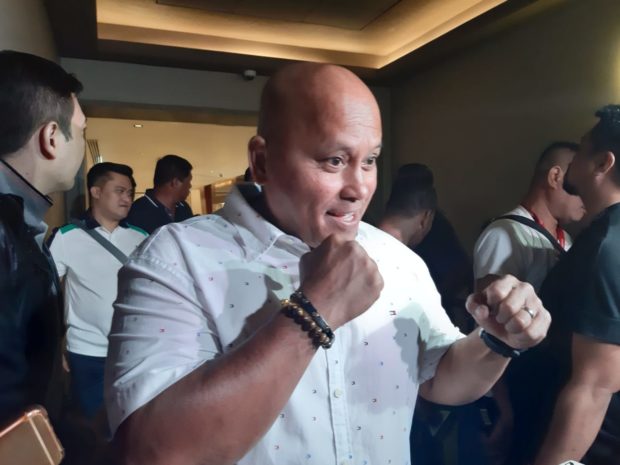 MANILA, Philippines — Police chief-turned-senator Ronald “Bato” Del Rosa “will interrogate” two former members of the Communist Party of the Philippines-New People’s Army (CPP-NPA) when they face Wednesday’s resumption of a Senate probe on alleged recruitment of students to the underground movement.

Dela Rosa, chair of the Senate committee on public order and dangerous drugs, is spearheading the investigation aimed to “correct” policies in universities that tend to “produce enemies of the state.”

During its first public hearing last week, parents of alleged missing students narrated how their children abandoned their families after joining the leftist groups, further lamenting how some of the students even quit school.

Also during the initial hearing, it was revealed that the alleged recruitment of students was being done inside campuses and that among the groups allegedly involved were Kabataan Party-list, Anakbayan, and League of Filipino Students.

Dela Rosa said that if progressive organizations can freely do those things, then the government should also be able to its own “indoctrination” in schools.

For its part, Anakbayan has called Dela Rosa an “utter fool” for picking on students and prodding parents to monitor their children, notably the supposed changes in their behaviors because it could be a sign of their alleged recruitment to communist organizations.

“Bato is an utter fool thinking that children will remain static. Children grow up into mature adults unlike him,” Anakbayan Spokesperson Alex Danday said in a statement on Monday.

“Changing means that we have learned to ask questions, to tell right from wrong, and make our own decisions – something that Dela Rosa has never learned in his 57 years,” he added.

READ: Anakbayan: Bato an ‘utter fool’ for picking on students-activists

Anakbyan and other leftist groups were invited to attend Wednesday’s hearing after skipping the first hearing last week.

The second public hearing will also be co-headed by the Senate committee on national defense and security chaired by Senator Panfilo Lacson. /kga