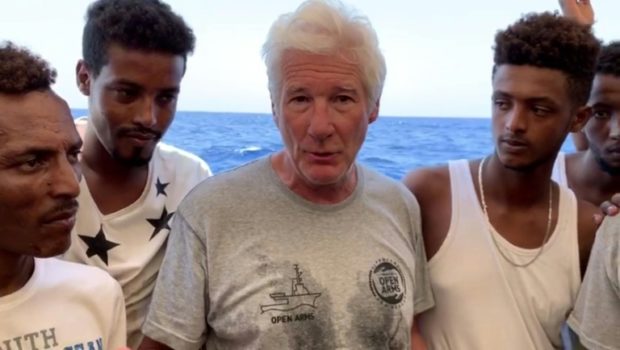 Hollywood star Richard Gere (middle) joined the Spanish charity ship Open Arms keeping a media spotlight on the 121 stranded migrants on board, waiting for European nations to agree to take them in. Image: Proactiva Open Arms via AFP

More than 80 migrants were rescued in the Mediterranean on Saturday, Aug. 10, as Hollywood star Richard Gere highlighted the plight of those stranded after boarding a charity ship.

The migrants, mainly Sudanese men and adolescents, were picked up by the Ocean Viking ship from a rubber dinghy off the coast of Libya, according to Doctors without Borders (MSF), which operates the vessel along with the French charity SOS Mediterranee.

The rescue operation comes as a dispute escalates over who will take in migrants rescued by another charity ship, with mild Mediterranean weather increasing the number of people trying to make their way to Europe from Africa.

Malta said Saturday it would take in 39 migrants picked up by the Open Arms ship in the country’s rescue zone the day before, but refused entry to 121 others who have been on board the ship for nine days.

However Spanish charity Proactiva, which operates the ship, rejected the offer, insisting Malta also take the 121 migrants, including 30 children.

Proactiva founder Oscar Camps said the decision not to take in all the migrants “caused a serious security problem on board” the Open Arms.

“The anxiety levels of these people is unbearable,” he tweeted.

Malta said the 121 migrants “were intercepted in an area where Malta is neither responsible nor the competent coordinating authority.”

American movie star Gere boarded the Open Arms on Friday, Aug. 9, aiming to keep a spotlight on the situation for migrants as they wait for European nations to agree to take them in.

“Most people refer to them as migrants, but for me, they are refugees that are running from a fire,” Gere told a press conference on the Italian island of Lampedusa on Saturday. 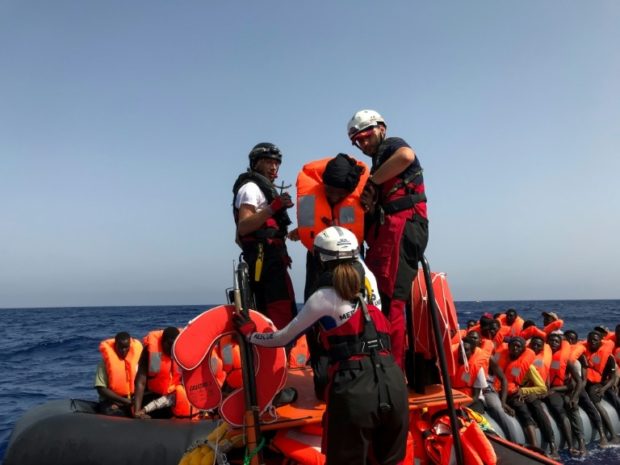 The 85 African migrants were starting their third day at sea off Libya when the Ocean Viking rescue vessel plucked them from an inflatable boat. Image: AFP/Anne Chaon

Gere said he spoke to almost everyone on board and “there are 121 stories.”

“These are extraordinary people, they are so strong, they lived such horrors, they were living in hell… torture, rapes imprisonment,” he said.

Gere said he did not care about politics, that the point was to help people in distress.

“I am coming from a place with a very bizarre political situation, with a president who is putting an enormous amount of energy into dehumanizing people.

“We have our problems of refugees who come from Honduras, El Salvador, Nicaragua, from Mexico. It is very similar to what is going on here.

“It has to stop everywhere on the planet now,” Gere said, who helped bring water and food to the migrants.

He said they “appeared to be in OK shape,” but warned, “They are getting closer and closer to breaking point.”

The Ocean Viking rescued 85 people including four children on Friday, so the latest group means a total of around 170 are now on board, all from sub-Saharan Africa.

An AFP journalist is also on the ship, which left Marseille on Sunday, Aug. 11. 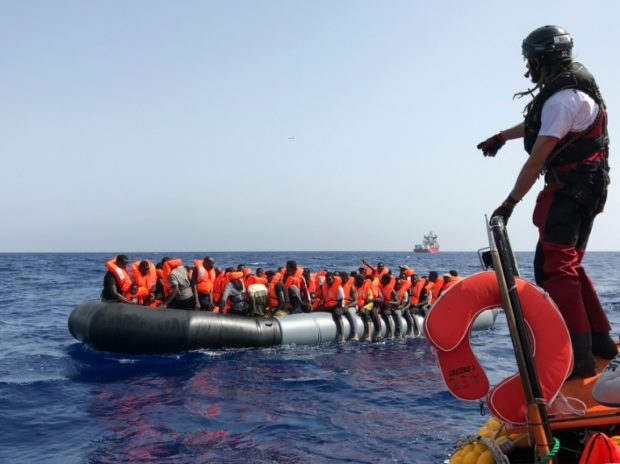 The 85 rescued migrants had come from Senegal, Mali, Ivory Coast and Sudan, among them five women and 15 children, the youngest age one. Image: AFP/Anne Chaon

The Ocean Viking is registered in Norway, and Italy’s far-right Interior Minister Matteo Salvini sent a warning to Oslo this week.

“Italy is not legally bound, nor disposed to take in clandestine, unidentified migrants from onboard the Ocean Viking,” wrote Salvini, who has taken a hard line against migrants and this week sparked a political crisis by pulling his support from Italy’s governing coalition.

Salvini has said the same about the Open Arms migrants.

He also said he hopes Gere “gets a bit of a suntan” and that he should take the migrants to Ibiza, a Spanish resort island.

Norway’s minister of justice and immigration, Joran Kallmyr, said on television that the migrants should be “transported back to Africa, either to Tunisia or Libya.”

“They should not be sent to Europe because then this action will be an extension of the refugee route instead of a rescue operation.” 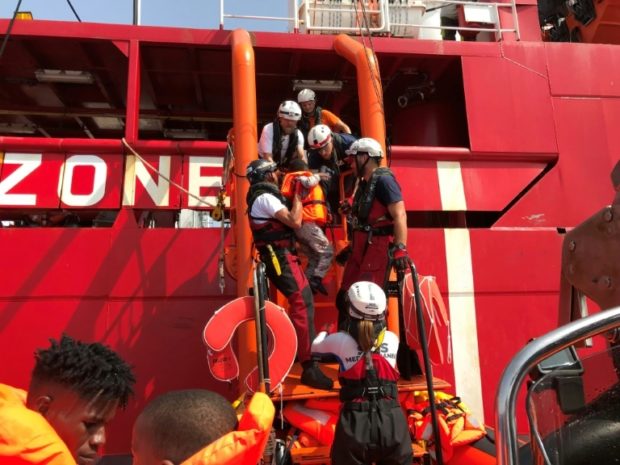 European parliament speaker David Sassoli wrote to European Union (EU) Commission President Jean-Claude Juncker on Thursday, Aug. 8, urging immediate aide for the migrants and a quick deal between the member states to take them in.

However, a commission spokesperson admitted Friday that no mediation effort was underway in Brussels to allow the Open Arms group to disembark on dry land in Europe.

France announced on July 22 that 14 EU states had agreed on a “solidarity mechanism” to share out migrants saved in the Mediterranean, so long as they were allowed to disembark in Italy. HM/JB

Richard Gere to become a dad again at 69—report