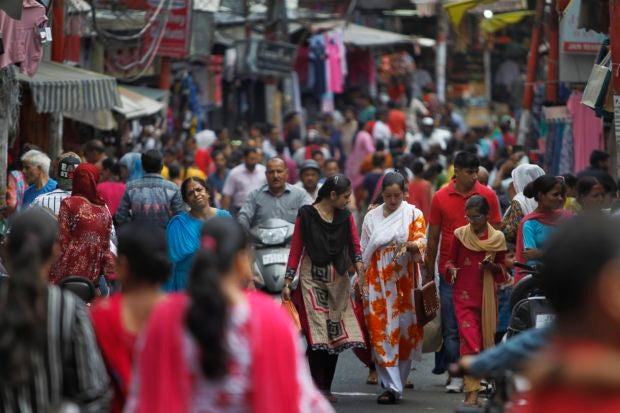 Muslim women return after getting fresh henna decorations on their hands on the eve of Eid al Adha, in Jammu, India, Sunday, Aug.11, 2019. Authorities in Indian-administered Kashmir said that they eased restrictions Sunday in most parts of Srinagar, the main city, ahead of an Islamic festival following India’s decision to strip the region of its constitutional autonomy. There was no immediate independent confirmation of reports by authorities that people were visiting shopping areas for festival purchases as all communications and the internet remain cut off for a seventh day. (AP Photo/Channi Anand)

NEW DELHI — An uneasy calm prevailed in Indian-administered Kashmir on Monday as people celebrated a major Islamic festival during a severe crackdown after India moved to strip the disputed region of its constitutional autonomy and imposed an indefinite curfew.

All communications and the internet remained cut off for the eighth day. News reports said that streets were deserted, with authorities not allowing any large congregations to avoid anti-India protests.

A tweet by Kashmir police said that Eid festival prayers “concluded peacefully in various parts of the (Kashmir) Valley. No untoward incident reported so far.” It was not immediately possible to independently confirm the claim.

India’s foreign ministry shared photos of people visiting mosques, but a spokesman wasn’t able to specify where the photos were taken within Jammu and Kashmir, which New Delhi downgraded from a state to two federal territories a week ago.

Shahid Choudhary, a government administrator in Srinagar, the region’s main city, tweeted late Sunday that he held a meeting with religious leaders for prayer arrangements.

Indian news channels did not show any video of street life in the region on Monday morning. In previous days, the channels had been broadcasting live video of the movement of people, cars and other vehicles in Kashmir, raising hopes of a further easing of curfew restrictions on Monday for Eid celebrations.

The security lockdown appears to be aimed at avoiding a backlash in India’s only Muslim-majority region, where most people oppose Indian rule and is expected to last through Thursday, India’s Independence Day. The restrictions had been briefly eased last week for residents to attend mosques for Friday prayers, and people also were allowed to shop on Saturday and Sunday ahead of the Eid festival.

Junior Home Minister G. Kishan Reddy said Sunday that he expected the situation in Kashmir to become “fully peaceful” in about two weeks.

Thousands of additional troops were sent to the disputed Himalayan region before India’s Hindu nationalist-led government said last Monday that it was revoking Kashmir’s special constitutional status and downgrading its statehood.

Prime Minister Narendra Modi said in an address to the nation that the move would free the territory of “terrorism and separatism” and accused India’s archrival Pakistan of fomenting unrest.

Kashmir is divided between India and Pakistan but claimed in full by both. Rebels have been fighting Indian rule in the portion it administers for decades. /kga