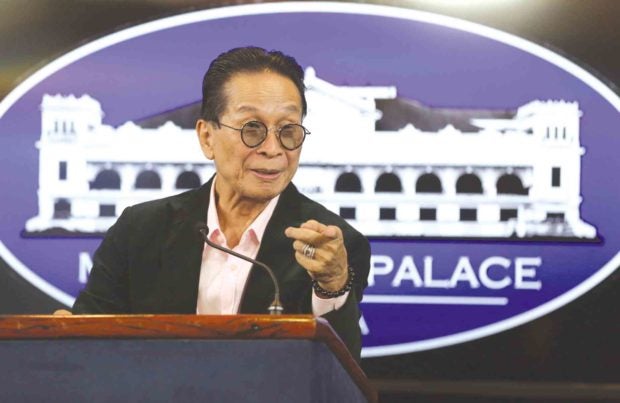 MANILA, Philippines — Government officials can accept gifts but with nominal value only, Malacanañg said Monday as President Rodrigo Duterte drew a sharp rebuke for saying police could accept gifts out of gratitude.

READ: Duterte OK with cops accepting gifts out of gratitude

But Panelo said the gift should only be nominal.

He, however, could not categorically say what nominal is.

“But what is important is yung pagbibigay is not in consideration or anticipation of favor or in exchange for a favor. Yun ang pinaka test, that’s the test,” he added.

Panelo, who is also Duterte’s chief legal counsel, said it was OK for government officials to accept gifts as long as it’s not “excessive.”

He even cited an example of officials receiving gifts during their birthdays.

“Ngayon kung bilyonaryo ang magbibigay sa iyo, wala sa kanya yun napakaliit na bagay ’yon. Pero what is important is, hindi ’yon binigay in anticipation of a favor or coming from the recipient, or in exchange of favor from that recipient who is a police officer,” he added. “E maliwanag naman ang batas eh, kung masyado nang excessive di ba?”

No need for guidelines

Panelo believed there was no need for guidelines to set a threshold on what is of nominal value or not.

“What do you mean guidelines? Maliwanag naman yung batas e. You don’t need guidelines,” he said.

Pressed about what is of nominal value, he said, “the law does not specify. So you use your discretion na yung tama. May standards naman tayo ng excessive at hindi e.”

The Palace official even cited the Filipino values of having debt of gratitude.

Panelo was referring to the Anti-Graft and Corrupt Practices.

He earlier said that “unsolicited gifts or presents of small or insignificant value offered or given as a mere ordinary token of gratitude or friendship according to local customs or usage” are exempted from the anti-graft provisions.

He insisted that there was nothing wrong with the statement of the President, saying “there is an exception to the law.”

Asked if the law should be made clear, he said “that is for the lawmakers. That is not ours. We only implement.”

“That’s why it is addressed to the wisdom of the lawmakers. How they will go about it,” he added.

He reiterated that corruption in government would not be tolerated.

He said it is only the court who could decide on what is of nominal value or not.

“Ang court lang makakaano niyan, kung merong kaso at dinemanda mo, then the court can decide whether it is nominal or not,” he said./ac

Read Next
PCG: 210 passengers stranded in Luzon ports due to bad weather
EDITORS' PICK
PH to send 584 athletes, 161 officials to Vietnam SEA Games
Gear up and get ready to play with Yamaha Mio Gear
SSS: Members on home quarantine due to COVID-19 can apply for sickness benefit
Acer starts the year off strong with the Aspire Vero National Geographic Edition
Kalinga, Ifugao, Mt. Province, N. Samar will be under Alert Level 4 from Jan 21-31
Mobile COVID-19 vaccination for commuters, transport workers set at PITX
MOST READ
Imelda Marcos trends on Twitter after octogenarian jailed for allegedly stealing mangoes
Mayor Vico counters vice mayor: ‘Did I say anything about his family?’
Municipal court in Pangasinan sets arraignment for ‘Lolo Narding’
‘Unbelievable!’ Pacquiao hits DA’s plan to import 60,000 MT of fish
Don't miss out on the latest news and information.