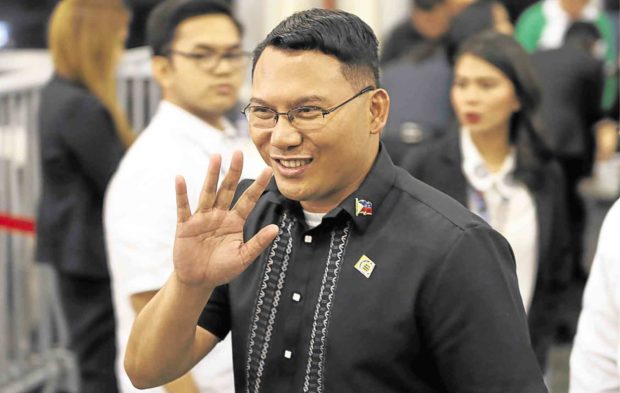 MANILA, Philippines — The Duterte Youth party-list group still tagged Ronald Cardema as its first nominee in a new certificate of nomination that it filed on Tuesday with the Commission on Elections (Comelec) although the poll body had already junked his nomination.

In the certificate, Cardema was followed by his wife Ducielle Cardema tagged as “2nd nominee.”

Ronald’s name was just inserted above his wife’s and tagged as “1st nominee.”

Under the law, anyone who intends to run as a representative of a youth sector should only be between 25 to 30 years old. Ronald is 34, while Ducielle is 27.

However, Ronald made a last-minute substitution bid on May 12 — just a day before the midterm elections.

The Duterte Youth won a seat in the House of Representatives.

Given the push-and-pull situation on the nomination of Ducielle for Duterte Youth, election lawyer Emilio Marañon, counsel for the youth groups that successfully sought the disqualification of Cardema, slammed this move of the concerned party-list group.

For Marañon, what Duterte Youth did was illegal since the party-list law prohibits the alteration of the order of nominees after it has been submitted to Comelec.

“This substitution is yet another mockery of the party-list system, of the Comelec and of the general public and, thus, should not be allowed by the Commission en banc,” Marañon said in a statement.

“The obvious intention is to secure the Congressional seat to Ronald Cardema’s wife, Ducielle, should the cancellation of the former’s nomination is affirmed by the Comelec en banc. This new ploy exposes the depravity of Duterte Youth and its corporate officers, fortifying our previous position that their registration should be canceled,” Marañon added.

He said their camp would file petitions before the Comelec against the Duterte Youth in the coming days.

The Comelec said that no certificate of proclamation would be given yet to the Duterte Youth following the disqualification of Cardema due to his being overaged.

READ: No certificate of proclamation to be given to Duterte Youth yet – Guanzon

Read Next
Comelec: Public satisfaction confirms May elections’ success
EDITORS' PICK
Acer starts the year off strong with the Aspire Vero National Geographic Edition
PH logs 37,070 more COVID-19 cases; over 33K others recover
The best of bayside and city living at SMDC’s Sail Residences
Comelec division junks petition to cancel Marcos COC for president
Marcos camp ‘extends hand of unity’ after COC cancellation bid is denied
Over 3 Million worth of prizes to be won at Smart Padala’s SENDali Manalo Promo!
MOST READ
NBI foils escape attempt of Kerwin Espinosa, two others
Comelec division junks petition to cancel Marcos COC for president
Francine Diaz’s manager denies actress is being courted by Seth Fedelin
‘Not my loss’: Did Kris Aquino just comment on her breakup with Mel Sarmiento?
Don't miss out on the latest news and information.