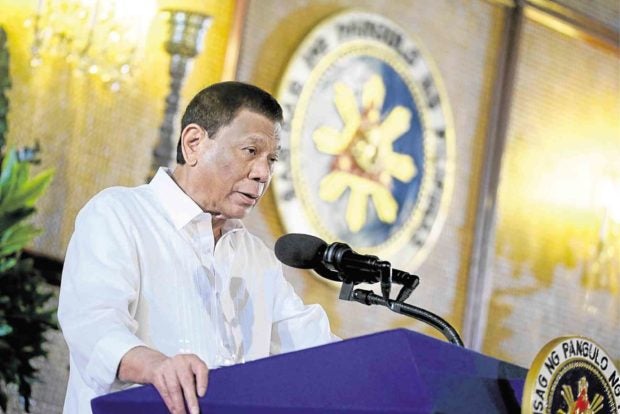 STOPPING VIOLENCE President Duterte is sending more troops to Negros Oriental amid the series of killings, which he blamed on communist rebels, that rocked the Central Visayas province recently. MALACAÑANG PHOTO

MANILA, Philippines — After warning that he might resort to “drastic and more severe” measures to quell the unrest in Negros Oriental, President Rodrigo Duterte had ruled out declaring martial law in the province.

The President said the drastic action he was earlier referring to was the deployment of additional troops to the province.

“You have a ruckus there in Negros. The ‘drastic’ I was talking about was that I would fill it up with soldiers, just like Jolo. I have one division and I will send another,” Mr. Duterte said on Tuesday.

He added: “Let us make it clear: I will never declare martial law. Except in Mindanao, where it’s needed, because there was already a rebellion.”

The President made the remarks after leading the oathtaking rites of newly elected officers of the League of Cities of the Philippines and the Liga ng mga Barangay in Malacañang.

“Look, there will never be a time that I will declare martial law. What I said was that I would take drastic actions,” he said.

The President added: “Martial law, if you just add more troops there, it’s the same. It has nothing to do with … You do not go after innocent people. Martial law, you go after the lawless elements.”

“So why do you have to declare it? Why do I have to tell Congress?” he said.

However, the President hinted at “declaring” something else but declined to tell his audience what was precisely on his mind.

“If it is really something which bothers the country, well I might declare another thing. And that is for you to guess what would it be,” he said.

Presidential spokesperson Salvador Panelo, at a press briefing earlier on Tuesday, said he asked the President on the possibility of martial law being declared in Negros Oriental, where several killings had occurred in recent weeks.

“Martial law will only be imposed in accordance with the Constitution. Just like in Negros. I asked him last night about Negros Oriental,” Panelo said.

“What he [the President] said was, ‘You and I are lawyers. We know that we cannot just impose martial law unless the requirements are there,’” he added.

Panelo said the President was still allowed to tap his emergency powers to “quell lawless violence in the province” by calling the military.

He said the President had not yet used his emergency powers to end the spate of killings in Negros Oriental, which left a lawyer, teachers, policemen and local officials dead last month.

“Right now, he has not done that. He has only called 300 of the police’s strike force, or was it the SWAT (Special Weapons and Tactics team)? That is what he has done for now,” Panelo said.

Last week, the President said implementing drastic measures in Negros Oriental would “not sit well with everybody” as he blamed the communist rebels for the killings.

He also described the killings as “unrestrained, unbridled, uncontrolled,” and that he would order the military to give the communist rebels “what they deserve.”

The Defend Negros #Stop the Killings network has recorded 83 victims of extrajudicial killings on Negros Island, composed of the provinces of Negros Occidental and Negros Oriental, from January 2017 to July this year.