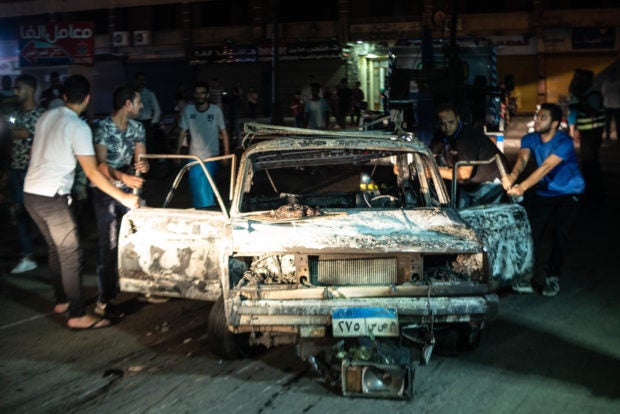 A picture taken early morning on August 5, 2019 shows people surrounding a burned car after an accident that caused an explosion leaving 16 dead and 21 injured in downtown Cairo. – The accident was caused by a speeding car heading in opposite direction and colliding with three other cars which caused the explosion, health ministry said in a brief note on their Facebook page. The incident resulted in 16 dead and 21 injured so far. AFP

Cairo, Egypt — At least 20 people have been killed when a speeding car driving against traffic crashed into three others causing a huge explosion in Cairo, the Egyptian health ministry said Monday.

The car collision, which happened just before midnight Sunday outside the National Cancer Institute in central Cairo, also wounded 47 people, the ministry added.

Four of those killed in the deadly crash remain unidentified.

Between “three and four (of the injured) are in critical condition in the intensive care unit,” Khaled Megahed, a spokesman for the health ministry, told an early Monday news conference.

He said they suffered from “several burns of varying degrees”.

Body parts were also retrieved from the scene, he added.

Social media users posted footage of cars ablaze at the scene and of patients being evacuated from the Cancer Institute, which was severely damaged and charred in the explosion.

Megahed said that 78 cancer patients from the institute were moved to other hospitals to continue their treatments.

Egypt’s prosecutor general has ordered an investigation to determine the causes of the crash.

Deadly road accidents owing to driver error and dilapidated infrastructure are common in Egypt with over 3,000 killed in more than 8,400 crashes in 2018, according to official figures published earlier this year. /kga

ADVERTISEMENT
Read Next
‘Endo’ bill still a priority of Duterte – PLLO chief
EDITORS' PICK
Smart releases Hyun Bin’s second TVC
Current dominant strain of COVID-19 more infectious than original—study
Water remains our saving grace right now
DOLE: Return of OFWs’ remains from Saudi to be ‘delayed,’ deadline moved to ‘early next week’
‘Justice will be done,’ Duterte assures as he vowed probe on Jolo incident to bare ‘truth’
EuroMillions Superdraw: A lottery draw unlike any other is coming to the Philippines
MOST READ
BREAKING: Duterte signs anti-terror bill into law
Locsin warns of ‘severest response’ if China’s army drills in SCS ‘spill over’ to PH domain
Duterte to PNP, AFP: I’m pleading for calm, understanding over Sulu incident
Converge ICT applies for P35.9B IPO
Don't miss out on the latest news and information.