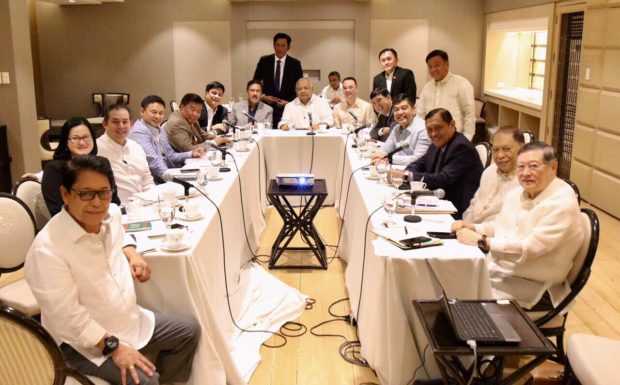 MANILA, Philippines — The Security of Tenure bill (SOT), which was vetoed by President Rodrigo Duterte on July 26, was again made a priority legislative agenda of his administration.

“We have ironed out the details in order to avoid a veto,” he said.

Among the priority bills, Sitoy said, are the coco levy, national land use act, and the revival of the Reserve Officers’ Training Corps (ROTC).

In his veto message, Duterte said he vetoed the SOT because it would “unduly broaden the scope and definition of prohibited labor-only contracting.”

Sitoy said federalism, a campaign promise of Duterte, was not tackled during the meeting.

“No [not discussed],” he said when asked if federalism was taken up.

In a speech on June 25, Duterte has publicly declared he is no longer inclined to push for federalism to purportedly break the Manila-centric government in the country.

READ: Duterte: If you do not want federalism fine but change the Constitution

During the presidential elections, Duterte vowed to push for federalism, which he said would break the Manila-centric government in the Philippines.

Read Next
29 killed in 2 US shootings, and it could have been worse
EDITORS' PICK
House energy committee chair Arroyo bats for cheap electricity
Robinsons Malls amps up the fun as official venue partner of PBA events
DOH logs 1,118 new COVID-19 cases during PH election week
Frontal system to bring rains over parts of northern Luzon on Tuesday
SEA Games: Carlos Yulo gets fifth gold to lead PH gymnastics to best finish in recent years
Provincial board lifts ban on open pit mining in South Cotabato
MOST READ
Cebu Pacific, CAAP looking into pilot’s post vs. Robredo
James Reid reacts to kissing video with ‘rumored BF’: ‘Is true?’
Ukrainian force begins evacuating from last Mariupol stronghold
Malacañang website goes down, but only for ‘updating’
Don't miss out on the latest news and information.