Tit for tat: Give NPA rebels what they deserve, Duterte tells military 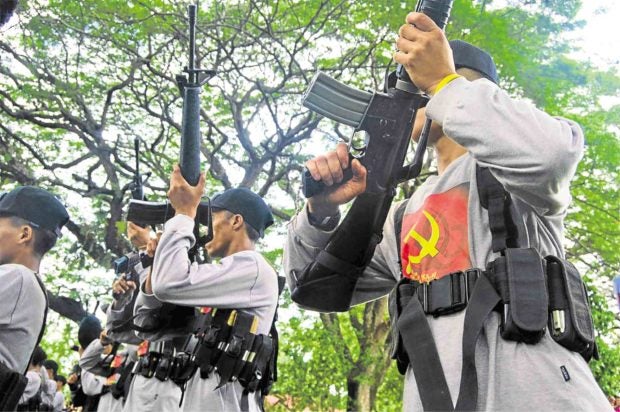 MANILA, Philippines — President Rodrigo Duterte on Friday ordered the military to give the communist rebels what they deserve as he accused them of being behind the spate of killings in Negros Oriental.

Speaking at the Mindanao-wide distribution of land certificates to agrarian reform beneficiaries in Davao City, Duterte blamed the New People’s Army for the killings in the country, particularly in Negros.

“I will give you tit for tat, that’s what I told the military. Give them what they deserve,” Duterte said.

“You are killing everybody there. Everyone that is anti-communist or does not want communism, you kill,” he added.

The President said the Philippines has been “infested” with NPA rebels, which he described as parasites.

“You communists, you have crossed the red line. The countryside is infested with parasites like you,” he said.

He slammed the communists for torturing and killing of four policemen in Negros.

“I will not take it sitting down. I told the military gawin mo sa kanila, do it to them also,” he said.

He reiterated he would implement “a more severe measure” to address violence in the country.

“I’m telling you, I will implement a more severe measure. What is it? Hintay lang kayo,” he said without giving details.

“Pero sumosobra na kayo. But you cannot do it unrestrained, unbridled, uncontrolled,” he added.

Duterte did not elaborate what severe measure he would implement but his presidential spokesperson Salvador Panelo earlier said the President might declare martial law in Negros Oriental over the killings in the province.

Read Next
Duterte calls Karapatan an ‘organization of demons in the Philippines’
EDITORS' PICK
Get exciting deals and discounts when you download the new McDonald’s App
‘A greener, cleaner tomorrow’: A how-to guide for Filipinos who want to help with today’s energy crisis
SM continues to send relief assistance to remote towns in Batangas
Palace: US Senate move also made Duterte junk VFA
China expands lockdown against virus, fast-tracks hospital
Countries with confirmed cases of coronavirus
MOST READ
FlipTop rapper Loonie freed on bail
No time for revelry; Tagaytay instead plans for alert level 5
Taal’s sulfur dioxide emission increases
Palace: US Senate move also made Duterte junk VFA
Don't miss out on the latest news and information.