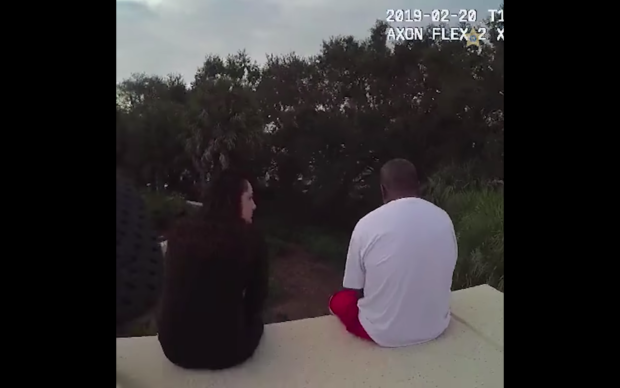 A woman recited lyrics from Linkin Park’s “One More Light” to stop a man from jumping off a ledge. Image: Facebook/@OrangeCoSheriff

A woman in Florida stopped a man from jumping off a bridge with the help of Linkin Park lyrics.

Cristina Settanni, a nurse, was running late to work last February when she spotted a man sitting on the ledge of an overpass. She stopped her car and accompanied him on the ledge. Florida’s Orange County Sheriff’s Office shared the incident on a Facebook video.

“I stopped because I’ve been where he was,” she said in the video. “He needed somebody to show that somebody cared enough to stop and [cared] enough to tell him that he didn’t need to do that today.”

While on the ledge, Settanni recited a Linkin Park lyric from the song “One More Light”: “Who cares if one more light goes out? Well, I do.” After that, the man was in tears.

Cayer asked the man to step back, but when he resisted, the officer pulled him back to the bridge. He learned that the man did not want to be a burden to his family after some bad decisions.

The man was taken to a mental health facility rather than arrested, as per the Florida Mental Health Act.

Settanni says she thinks of the man every day and cannot bring herself to drive through the same road.

The band acknowledged Settanni’s act of kindness on Twitter on Wednesday, July 31 with the simple message, “Thank you Cristina.”

“One More Light” was Linkin Park’s last single with vocalist Chester Bennington. Bennington took his life in 2017, leaving loved ones and fans heartbroken. After his death, the band launched a website dedicated to Bennington which contains details of the suicide hotline in the U.S. JB

The Philippine Department of Health has said that every case of suicide is a tragedy that can be avoided. Thus, people who feel that they may be suffering from mental health and need help may call Hopeline hotlines:

Paulo Avelino opens up on suicide attempt years ago, regrets not being able to save friend’s life