DepEd, DOH in talks on likely use of Dengvaxia amid rising dengue cases 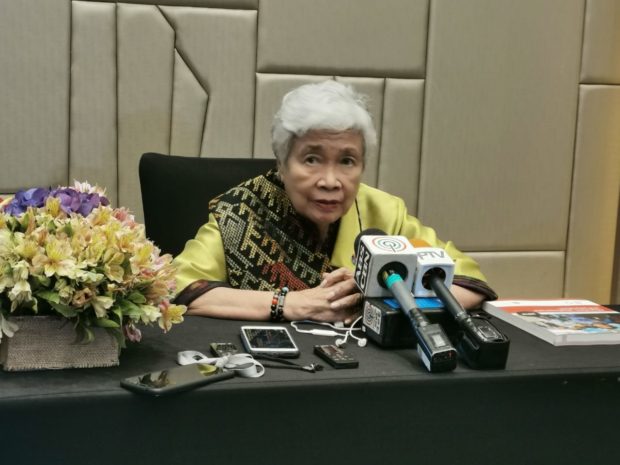 Department of Education (DepEd) Secretary Leonor Briones during an interview with reporters on the sidelines of the 2019 Global Education Monitoring Report launch in Bonifacio Global City, Taguig on Thursday, Aug. 1, 2019. Image: Katrina Hallare/INQUIRER.net

MANILA, Philippines — With Malacañang expressing openness to making Dengvaxia available in the market again, the Department of Education (DepEd) and Department of Health (DOH) are currently discussing the possible use of the anti-dengue vaccine once more.

In an interview, Education Secretary Leonor Briones was asked if her agency will be willing to integrate into its school-based immunization program the use of Dengvaxia again amid increasing cases of dengue in the country.

As the country faces continuously rising cases of dengue, Malacañang on Wednesday said it is open to making Dengvaxia available in the market again.

This after former DOH Secretary and now Iloilo 1st District Rep. Janette Garin urged the government to “listen to real experts” and make the vaccines accessible again to the public.

Although Briones said she would not blame parents for deciding not to vaccinate their children with Dengvaxia, she noted: “Pero I would assume after three years, they have further improved on the efficacy or whatever findings that they have been doing on [the vaccine].”

Pressed if DepEd will support DOH in case the health agency recommends the use of Dengvaxia again, Briones answered: “Depende sa usapan, kasi ang DOH ang mag-assess n’yan. As I said, I will assume whatever findings there were during the earlier tests would have been corrected, enhanced or strengthened.”

“So ‘yun ang nire-remind namin, it’s not a curative aspect but the preventive aspect that we should not make the environment hospitable to the dengue virus, which is carried by the mosquito,” she further said. /kga