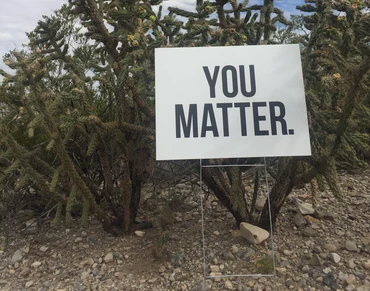 One dad from Washington, United States is effecting change in his community by putting up suicide prevention signs in a bid to inspire hope among the young.

Colby Wallace, who has young daughters of his own, wanted to take action due to the helplessness he felt as a parent whenever he would hear stories of suicide, as per Q13 Fox on May 22.

“As a parent, you feel really helpless when you hear these stories, that this is happening,” he said in the report. “This is happening a lot, but nobody wants to talk about it.”

Wallace’s initiative started in 2017 in Oregon and saw him erecting signs with simple messages such as “You matter” and “Don’t give up” along sidewalks. Today, it has ballooned into a non-profit organization with a reach to over 26 countries.

Wallace believes one needs to be the change they want to see, and in the last couple of weeks, he has started putting up signs near his daughters’ elementary school. In his own little way, he hopes to get people to talk more about mental health and suicide among young people.

Neighbors have also stepped in to help Wallace out after some of the signs in the neighborhood got vandalized.

“What a great idea to boost people’s feelings about themselves,” said neighbor Penny Scordas, who has put up some signs in their own front yard. “I can’t think of anything that’s better than ‘you matter.’”

Wallace, on the other hand, remains steadfast and is hopeful his simple message will be contagious and reach more people.

“I don’t know where this thing ends, but for now, for today, this is what we are going to do,” he said. “Don’t give up.” Cody Cepeda/JB