Why dead dumped at landfill in Cagayan de Oro 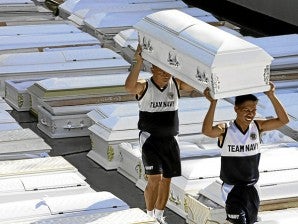 HEAVY BURDEN Navy personnel load about 500 coffins on the BRP Dagupan for shipment to the cities of Cagayan de Oro and Iligan on Tuesday due to arrive there on Christmas Eve. Coffinmakers in Sto. Tomas, Pampanga, worked through the night to build the coffins. The Navy ship is also bringing drinking water, clothes and other relief goods for survivors of the disaster. NIÑO JESUS ORBETA

CAGAYAN DE ORO CITY—After making the rounds of funeral parlors for three days, college student Christine Dalay’s search for her mother finally ended Tuesday—in a garbage dump. There, on top of a heap of garbage, lay the missing 48-year-old woman.

“It’s really painful,” Dalay said on seeing her mother dumped like garbage in the sanitary landfill. “I took good care of her when she was still alive. I can’t go near the bodies because I didn’t want to see my mother looking like that.”

A Philippine Daily Inquirer check showed there were at least 30 bodies in the dump, exposed to the elements and swarming with flies.

Mayor Vicente Emano has ordered that the bodies which overwhelmed funeral parlors could no longer accept be brought to the landfill. Funeral homes, most of them without water supply and running out of formalin, have complained of the stench from unclaimed bodies.

Emano defended his decision. “There’s no other place for them and the funeral homes have declined to keep them,” he said.

Emano said the stench of bodies had forced his government to move the corpses away from residential communities. But he explained that the use of the dump was only temporary and that the bodies would be eventually brought to Cagayan de Oro City Memorial Park.

The city government is building a chamber that can accommodate 200 bodies, which will be buried in individual coffins.

Amid the desperate shortage of coffins, the Philippine Navy last night prepared to ship about 500 caskets to storm-ravaged areas in Mindanao, with most of  the wooden boxes built in the Pampanga town of Sto. Tomas, the so-called “coffin capital” of Central Luzon.

The coffins were aboard the BRP Dagupan City, a logistics support vessel expected to arrive in Mindanao on Christmas Eve.

Coffinmakers in Sto. Tomas worked through the night to build the needed coffins, which were made of plywood and painted in white, according to Mayor Joselito Naguit.

The landfill was also the place where election paraphernalia were recovered during the May 2010 elections in which Emano was declared the mayoralty winner.

The dumping of the bodies there provoked outrage among families and friends of those still missing.

Joy Grace Moli, who went to the city dump to look for a missing classmate, said the least the city government could do was respect the dead. “What do they think of these people? Garbage?” Moli said.

President Benigno Aquino III, who flew to Cagayan de Oro on Tuesday, told reporters that bodies should never be brought to a landfill as this would deprive them of dignity and add more pain to families.

“I don’t know of any plans of anybody being put into landfills. I don’t know where these reports are coming from,” he said, apparently unaware it was Emano who ordered it. “Whoever put the deceased in that situation will have to answer to a court of law,” the President said.

Philippine Red Cross chairman Richard Gordon said the government could rent refrigerated vans to slow down the decay of the flood victims. But he said the decision lay with the city government.

Emano rejected Gordon’s suggestion, saying there were no refrigerated vans in the city.

But a resident, who refused to be named, said Emano could have simply checked the international container terminal in Tagoloan, Misamis Oriental province, where refrigerated vans are just nearby.

Emano’s brother, Pedro, is the mayor of Tagoloan.

Also on Tuesday, forensic experts from the National Bureau of Investigation (NBI) flew in from Manila for the “profiling” of the bodies.

In Iligan City, the city government has started the mass burial of unclaimed bodies after forensic experts from the NBI finished a postmortem examination on them. The examination included the taking of fingerprints, dental profiling and DNA sampling.

Dr. Reynaldo Ramiro, head of the forensics team, said each cadaver would be buried in a way that it would be easy to retrieve them after a matching process with the missing.

On the average, the examination would take an hour per cadaver because “the process is tedious,” Ramiro said.

There has been a clamor for the immediate burial of the unidentified decomposing bodies. Instead of a mass grave, authorities built tombs “to give dignity to the dead.”

Two two-level “tomb apartments” were constructed at the Palao Public Cemetery by local government employees, who volunteered their time on Monday despite it being a Muslim holiday.

Msgr. Jemar Vera-Cruz, vicar general of the Iligan diocese, said there would no longer be elaborate ceremonies but only the essential rites of a final blessing and prayers.

Most of the dead were women and children who drowned when floods triggered by Sendong gushed into homes while people were asleep.

In Iligan, Mayor Lawrence Cruz called on government employees not badly hit by the flood to volunteer their time for relief work, including making coffins.

Even the largest funeral parlor in Iligan, Capin Funeral Homes, was looking for more coffins, needing about 70 more.

Danilo Capin, owner of the parlor, said the delivery of the coffins from Cagayan de Oro was delayed because the caskets had to be cleaned of mud as the maker’s shop was hit by flood.

With funeral parlors overwhelmed, authorities in Iligan  on Monday organized the first mass burial of the dead.

“For public health purposes, we’re doing this. The bodies are decomposing and there is no place where we can place them, not in an enclosed building, not in a gymnasium,” Mayor Cruz said.