I wish I were the one who died, says ma | Inquirer News
Close
menu
search

I wish I were the one who died, says ma 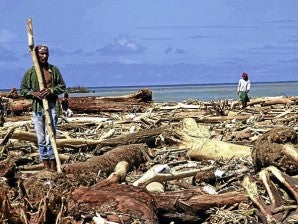 ILIGAN CITY—The mother was clutching her 4-year-old son, Jorniel, with one arm and clinging tightly to a banana tree with the other when she felt the life go out of him. He twitched once, slackened, and was gone.

In the blink of an eye, Joan Valdez’s world crumbled, and not even the muddy torrents of Tropical Storm “Sendong” could stop her tears from falling. “I just cried and cried while I held him,” she said in Cebuano.

But there were other sources of grief.

Her second child, 2-year-old Juraiza, turned up dead hours after the surging waters separated them late on Friday. The third, 6-year-old Rizalyn, who was torn from a relative’s embrace, is still missing.

“I wish I were the one who died,” Valdez, 26, said, weeping as she eyed the two tiny caskets that held her son and daughter on the ground of the funeral parlor.

Clear plastic sheets allowed mourners a view of the children’s slightly swollen bodies that showed signs of their ordeal.

“I can stand to lose all my possessions, but not them,” said the mother, who sells balut (boiled duck embryo) for a living.

Valdez said that by Saturday afternoon, she had stopped nursing hopes that her husband, Ricky, might still be alive.

She said Ricky, who had held on to another banana tree to survive Sendong’s fury, thought the same of her, but by some weird twist of fate they found each other at Capin Funeral Homes in Tubod where their children were to be prepared for burial.

They were struck dumb by the unexpected reunion, she said.

Valdez recalled the early rush of floodwaters as the wind howled outside their wooden house in Duranta B in Sta. Filomena village at past 11 p.m. on Friday.

“We decided to move to the big house of our neighbor. We were sure we would be safe there,” she said.

Then all hell broke loose.

A neighboring house borne by the raging tide slammed into the house where the group of eight was perched on the rooftop. They were toppled like a pile of bricks and swept away.

“I was holding my child and we tried to swim with the current. I found a banana trunk and I just latched on to it,” Valdez said.

After Jorniel died, she remained in the water for several more minutes, treading, waiting until it calmed.

Later she wrapped her son in a blanket and set about finding the others on a shore in Taguibo some 200 meters away from their village, where the current had taken them.

She said she still clung to the hope that Rizalyn might be alive somewhere.

At Capin Funeral Homes, dozens of men and women hung about, waiting for news on their missing kin.

Missing-person posters adorned a wall, made all the more tragic by the pictures of smiling faces on it. On  the opposite wall were posted gruesome photos of some of the corpses that had been brought there, now with name tags.

If not for a red handkerchief wrapped around his right wrist, relatives of Victoriano Amodia, a 42-year-old pedicab driver, would not have recognized his deformed body from the piles of corpses on the floor.

Demetrio Amodia said his brother liked to put the handkerchief on his wrist as he pedaled around the village ferrying passengers.

Victoriano Amodia’s face and body appeared mutilated, apparently from the impact of logs hitting him as he was carried by a wall of water that slammed into his house on Bayug island, in a settlement said to have been almost totally wiped out by the storm.

“His hand was raised and looked like it was cupping something. They said it’s because he was hanging on to a log when he was found,” his sister, Josefina Amodia, said.

The flood took Amodia’s entire family. His wife, Sabel, and their two children—5-year-old Charice and the year-old Mariz—have disappeared, and like so many others in this city of 300,000, are presumed dead.