Myanmar to consider Rohingyas as foreigners 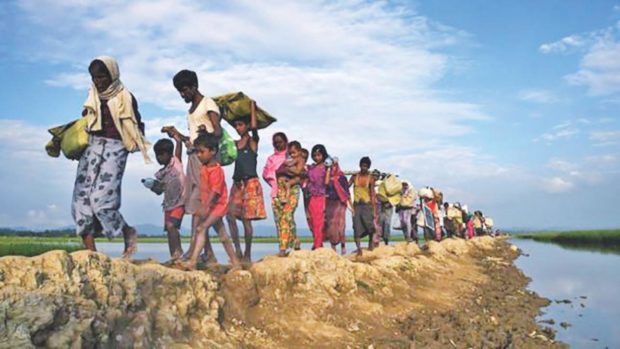 DHAKA — The Myanmar government will consider Rohingyas as foreign nationals, said Myanmar Foreign Affairs Permanent Secretary Myint Thu to reporters after a meeting with hindu Rohingyas at the Kutupalong camp in Cox’s Bazar in Bangladesh on Sunday.

Detailing his government’s position on the issue of Rohingya repartition from Bangladesh, Myint Thu said there were three types of citizenships in the Myanmar Citizenship Act 1982.

According to it, whoever has been living in Myanmar for three generations would be entitled to get “naturalized citizenship”.

Even if the Rohingyas are not direct Myanmar citizens, they will be allowed to live legally in Myanmar as foreign citizens according to clause three of the citizenship act, Myint Thu said, adding that in this process they will get a national ID card.

The foreign secretary, who is leading a 10-member team to Bangladesh, also had a meeting with Muslim Rohingyas at Camp-4 in the morning.

But his meetings over the last two days with Rohingya leaders failed to make any headway on the issue of repatriation.

Arakan Rohingya Society for Peace and Human Rights Chairman Mohibullah, who led a 30-member team in the meeting, said after Saturday’s unsuccessful meeting with the Myanmar delegation, they met again yesterday morning.

Mohibullah said the Myanmar delegation had come up with the same old proposals that they rejected before.

“They said we will have to live in ADP camps. We don’t agree with that proposal,” the Rohingya leader said.

He also said that not a single Rohingya would return to Myanmar if they were not guaranteed citizenship.

Mohibullah said they proposed that the Myanmar delegation, who reached Cox’s Bazar on Friday, return after two months after taking recognition of their rightful demands.

Bangladesh and Myanmar signed the repatriation deal on November 23, 2017.

On January 16, 2018, Bangladesh and Myanmar signed a document on “Physical Arrangement”, which was supposed to facilitate the repatriation of the Rohingyas.

The “Physical Arrangement” stipulates that the repatriation would be completed preferably within two years from the start.

The first batch of Rohingyas was scheduled to return on November 15 last year but it did not happen amid unwillingness of the Rohingyas due to a lack of congenial environment in the Rakhine State.

A brutal campaign by Myanmar’s military in 2017 drove 730,000 Rohingya Muslim to flee to Bangladesh’s Cox’s Bazar, where they live in camps, fearing further persecution if they return.

Myanmar, however, denies the allegations.