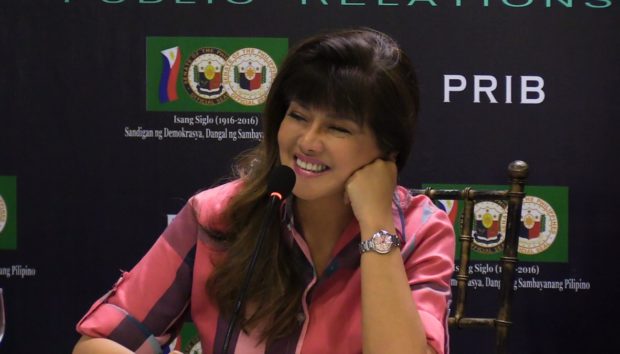 MANILA, Philippines — Senator Imee Marcos on Thursday said she is against legalizing same-sex marriage and institutionalizing divorce in the country.

During a weekly press forum at the Senate on Thursday, Marcos said she is not in favor of same-sex marriage because it is “too complicated.”

This even after she filed her own version of a bill that would prohibit discrimination on the basis of sexual orientation or gender identity or expression (SOGIE).

Another version of the SOGIE bill, which was approved by the House of Representatives on third and final reading last 2017 but remained pending at the Senate, was filed by Senator Risa Hontiveros.

“Wala, ayoko…nun,” Marcos said when asked if her version of the SOGIE bill has a provision on legalizing same-sex marriage.

The neophyte senator argued that the government should take “little baby steps” in social change.

Aside from her version of the SOGIE bill, Marcos also filed a measure on conjugal partnership.

Marcos also said that she is against the divorce bill.

Earlier, Hontiveros also refiled a measure that would institute absolute divorce in the country.

The Divorce Act of 2019 seeks to make psychological incapacity of either spouse, irreconcilable marital differences, marital rape, or being separated for at least 5 years as grounds for divorce, among others.

But Marcos said that the “welfare of the children of a broken marriage and the situation of the abandoned spouse” should be “primordial.”

“I am not so concerned about the legal status of consenting adults. Ang primordial dapat should be the welfare of the children of a broken marriage and the situation of the abandoned spouse. I think there are insufficient safeguards and no safety nets for both,” she said.