MANILA, Philippines — The House of Representatives will have swift panel hearings to approve “in record time” about a third of the 26 priority bills President Rodrigo Duterte outlined in his 2019 State of the Nation Address (Sona), House Majority Leader and Leyte 1st District Rep. Martin Romualdez vowed Thursday. 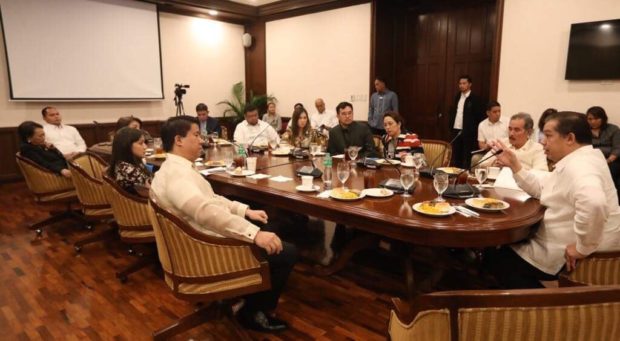 Romualdez met Wednesday Secretariat officials involved in the committee and plenary deliberations of bills upon the directive of Speaker Alan Peter Cayetano.

“With the innovations that we are planning to implement in committee deliberations, I am optimistic that we can approve about a dozen of the President’s priority measures in record time. Hopefully, the committee reports on these measures will be out for plenary deliberations by the first week of August,” Romualdez said in a statement.

Romualdez said only the National Transport Act and the Nuclear Regulatory Commission were not specifically mentioned by President Duterte in his Sona last Monday.

These, however, were among the priority measures specified by the President in his national report last year.

Romualdez said the committees may meet just once and immediately refer the bills for plenary deliberations.

The Leyte solon invoked Section 48 of the House rules which provide that: “In case of bills or resolutions that are identified as priority measures of the House, which were previously filed in the immediately preceding Congress and have already been approved on 3rd reading, the same may be disposed of as matters already reported upon the approval of majority of the Members of the committee present, there being a quorum.”

“After plenary deliberations, the House may even pull a surprise and approve these measures on third reading by the last week of August or early September,” he added.

Romualdez also consulted with House committee on appropriations chairman and Davao City Rep. Isidro Ungab on how to expedite the passage of the 2020 national budget on third and final reading by the end of October.

Meanwhile, Cayetano said the House would expedite the passage of the bill creating a department for overseas Filipino workers, as requested by Duterte.