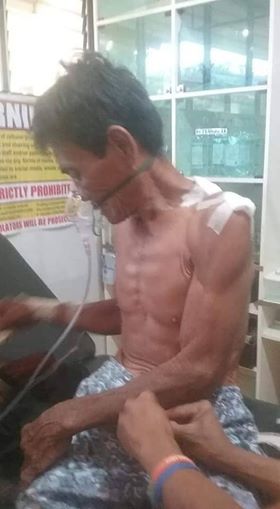 Ali Masla is treated of injuries at Cruzado Medical Clinic in downtown Pikit, Cotabato after his house in Barangay Kabasalan of the town was hit by a military airstrike pre-dawn on Thursday, July 25, 2019. Photo by Jessie M. Ali

CAMP SIONGCO, Maguindanao –– A woman was killed while her husband and grandson were hurt during the military’s air and ground assaults before dawn Thursday, July 25, at an area allegedly held by the Bangsamoro Islamic Freedom Fighters (BIFF) in the border of Maguindanao and Cotabato provinces.

The Philippine Air Force launched the airstrikes about 3:30 a.m., while a group of gunmen allegedly led by Abu Toraife, leader of a faction of the BIFF, who pledged allegiance to the Islamic State, was massing in the marshland of Barangay Kabasalan, Pikit, Cotabato, according to Army Major Homer Estolas, 6th Infantry Division spokesperson.

A house in Sitio Butilen of Kabasalan was hit in the airstrike, killing Misbah Masla, whom authorities only described as a “senior citizen.”

It wounded her husband, Ali, and their ten-year-old grandson, Edwin Masla, said a report reaching the Pikit police.

The wounded were brought to the Cruzado Medical Clinic at the Pikit town center, where they were treated for upper body injuries, the police said.

Brigadier General Alfredo Rosario, commander of the 602nd Army Brigade based in Cotabato, confirmed that a house was hit during the aerial assault but said that house owner, Ali Masla, was a BIFF member.

Rosario said another BIFF member, Eds Grapel, was killed in the offensive.

Rosario said the airstrikes and ground assaults were launched after intelligence information was verified and confirmed that Commander Abu Toraife and Salahuddin Hassan, with several foreign terrorists, were sighted in the village.

“This is to halt the manufacturing of bomb and destroy bomb-making facilities of BIFF who are plotting to launch bomb attacks,” Rosario said.

When reached by phone, BIFF spokesperson Abu Misry Mama denied that Abu Toraife was in Kabasalan during the airstrikes.

Two bomber planes took turns in pounding rockets toward BIFF positions from 3:30 a.m. until about 6 a.m.

Pikit residents said some 100 families living near Kabasalan have fled to safer grounds.

Rosario said clearing operations were ongoing as of this posting. /lzb