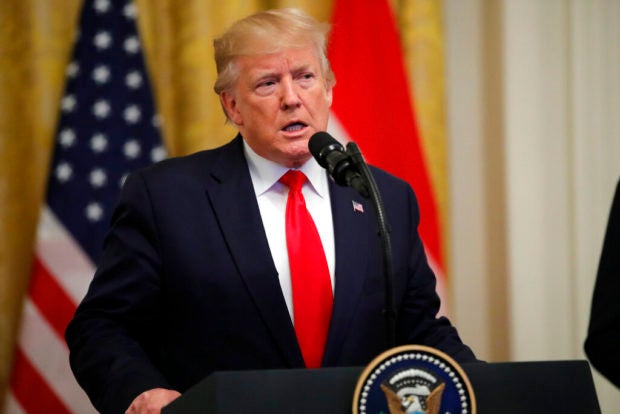 President Donald Trump speaks during a ceremony where Dutch Prime Minister Mark Rutte will present a 48-star flag flown on a U.S. Naval vessel during the D-Day invasion, in the East Room of the White House, Thursday, July 18, 2019, in Washington. The flag will be given to the Smithsonian’s National Museum of American History. The vessel was control vessel Landing Craft, Control 60 (LCC 60). (AP Photo/Carolyn Kaster)

WASHINGTON  — President Donald Trump says a U.S. warship destroyed an Iranian drone in the Strait of Hormuz amid heightened tensions between the two countries.

Trump says it’s the latest “hostile” action by Iran. He’s calling on other countries to condemn what he says are Iran’s attempts to disrupt the freedom of navigation and global commerce in the strategic waterway in the Persian Gulf region.

Trump says the USS Boxer took defensive action after the drone closed to within 1,000 yards of the warship and ignored multiple calls to stand down.

The president says the drone threatened the safety of the American ship and its crew.

Iran recently shot down a U.S. drone that it said was flying over Iran. Trump called off a planned retaliatory airstrike at the last minute.