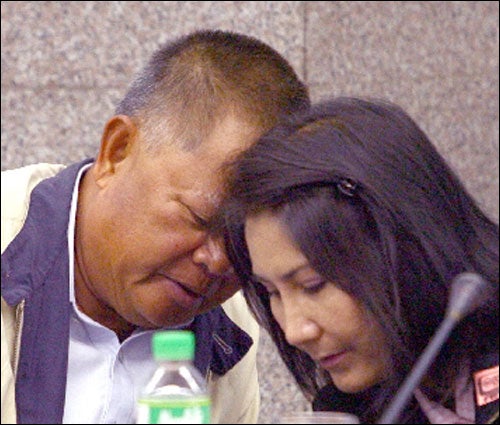 MANILA, Philippines – The Sandiganbayan has denied a joint demurrer to evidence filed by former military comptroller Lt. Gen. Jacinto Ligot and other accused facing civil cases on the forfeiture of unlawfully-acquired properties worth P55 million.

In the resolution released on July 8, the Second Division said that the objections of Ligot, his wife Erlinda, children Paolo, Riza, and Miguel, brother-in-law Edgardo Yambao and a certain Gilda Alfonso-Velasquez were denied for lack of merit.

According to the anti-graft court, the prosecution presented a sufficient case, based on prima facie or first impression — prompting the court to allow the continuation of the trial.

“Since most of the respondents’ assertions are already matters of defense, which are addressed in a full-blown trial, the presentation of respondents’ evidence is in order,” the resolution penned by Associate Justice Frederick Musngi said.

They also noted that several of the accused’s claims like allegations of forum shopping or filing two charges for a single case, and supposed violations of the Bank Secrecy Law, were already answered during the proceedings.

“Considering that the said issue had already been extensively discussed in the Court’s resolutions dated 10 March 2014 and 30 June 2004, the Court reiterates its findings that there is no violation of the rule instituting more than one suit for a single cause of action.”

“The respondents continued to anchor on the dismissal of the instant case on the ground of violation of the laws on the Secrecy of Bank Deposits.  However, the same was also laid to rest not only by this Court […] but also by the Supreme Court when it upheld the same,” Sandiganbayan added.

In May 2013, the Office of the Special Prosecutor asked for the forfeiture of the accused’s assets, valued at around P55.59 million, after these were supposedly unlawfully acquired when Ligot was still with the Armed Forces of the Philippines (AFP).

Ligot was one of the former AFP generals implicated in a “pabaon” scheme, where outgoing officials were given cash payouts for their loyalty.  Last April, he was found guilty in six perjury cases, while he was acquitted in two. /jpv