SRIHARIKOTA, India –  India aborted the launch on Monday of a spacecraft intended to land on the far side of the moon less than an hour before liftoff. 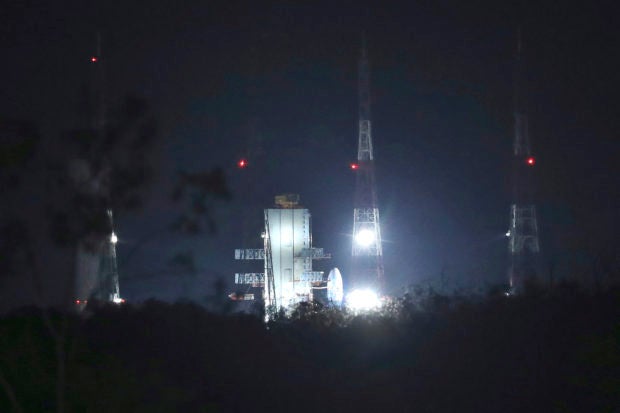 Indian Space Research Organization (ISRO)’s Geosynchronous Satellite launch Vehicle (GSLV) MkIII carrying Chandrayaan-2 stands at Satish Dhawan Space Center after the mission was aborted at Sriharikota in southern India, Monday, July 15, 2019. India has called off the launch of a moon mission to explore the lunar south pole. The Chandrayaan-2 mission was aborted less than an hour before takeoff on Monday. An Indian Space Research Organization spokesman says a “technical snag” was observed in the 640-ton launch-vehicle system. (AP Photo/Manish Swarup)

The Chandrayaan-2 mission was called off when a “technical snag” was observed in the 640-ton, 14-story rocket launcher, Indian Space Research Organization spokesman B.R. Guruprasad said.

The countdown abruptly stopped at T-56 minutes, 24 seconds, and Guruprasad said that the agency would announce a revised launch date soon.

Chandrayaan, the word for “moon craft” in Sanskrit, is designed for a soft landing on the lunar south pole and to send a rover to explore water deposits confirmed by a previous Indian space mission.

With nuclear-armed India poised to become the world’s fifth-largest economy, the ardently nationalist government of Prime Minister Narendra Modi is eager to show off the country’s prowess in security and technology.

If India did manage the soft landing, it would be only the fourth to do so after the U.S., Russia and China.

Dr. K. Sivan, chairman of the Indian Space Research Organization, said at a news conference last week that the around $140-million Chandrayaan-2 mission was the nation’s “most prestigious” to date, in part because of the technical complexities of soft landing on the lunar surface — an event he described as “15 terrifying minutes.”

After countdown commenced on Sunday, Sivan visited two Hindu shrines to pray for the mission’s success.

Practically since its inception in 1962, India’s space program has been criticized as inappropriate for an overpopulated, developing nation.

But decades of space research have allowed India to develop satellite, communications and remote sensing technologies that are helping solve everyday problems at home, from forecasting fish migration to predicting storms and floods.

With the 50th anniversary of the Apollo 11 mission this month, the world’s biggest space agencies are returning their gaze to the moon, seen as ideal testing grounds for technologies required for deep space exploration, and, with the confirmed discovery of water, as a possible pit stop along the way.

“The moon is sort of our backyard for training to go to Mars,” said Adam Steltzner, NASA’s chief engineer responsible for its 2020 mission to Mars.

Because of repeated delays, India missed the chance to achieve the first soft landing near the lunar south pole. China’s Chang’e 4 mission landed a lander and rover there last January.

India’s Chandrayaan-1 mission orbited the moon in 2008 and helped confirm the presence of water. The Indian Space Research Organization wants its new mission’s rover to further probe the far side of the moon, where scientists believe a basin contains water-ice that could help humans do more than plant flags on future manned missions.

The U.S. is working to send a manned spacecraft to the moon’s south pole by 2024.

Modi has set a deadline of 2022 for India’s first manned spaceflight. /gsg