Calls for investigations after power restored in Manhattan

NEW YORK – A Manhattan power outage that temporarily turned off the bright lights of the big city only lasted for a few hours, but left plenty of lingering questions and calls for investigations on Sunday. 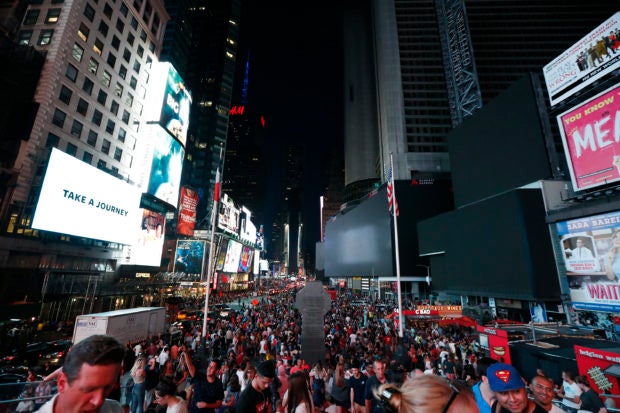 Screens in Times Square are black during a power outage, Saturday, July 13, 2019, in New York. Authorities were scrambling to restore electricity to Manhattan following a power outage that knocked out Times Square’s towering electronic screens and darkened marquees in the theater district and left businesses without electricity, elevators stuck and subway cars stalled. (AP Photo/Michael Owens

Con Ed President Tim Cawley insisted the Saturday night blackout that darkened more than 40 blocks of Manhattan including Times Square wasn’t due to high demand on the electrical grid, but said it would take some time to determine what exactly did happen.

“We think the grid is sound,” Cawley said Sunday, adding, “If there are lessons we can apply, we will.”

He said the system was prepared to deal with high demand, like that expected this coming week as temperatures rise.

Officials definitively ruled out either cyber- or physical acts of terrorism of any kind.

Thousands of people crowded the streets Saturday evening, using their cellphones as flashlights while they tried to stay cool amid the humid July evening, where temperatures hit the low 80s.

In the theater district, marquees darkened just before evening performances were set to begin. Most Broadway musicals and plays canceled their Saturday evening shows, though some cast members staged impromptu performances in the street. 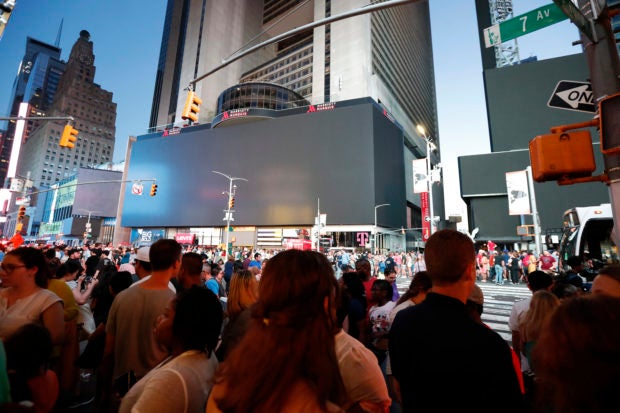 U.S. Sen. Charles Schumer said Sunday the Department of Energy’s Office of Electricity should investigate the work being done by Con Edison to maintain and upgrade the city’s power grid.

He added that “this type of massive blackout is entirely preventable with the right investments in our grid,” encouraging a thorough investigation that could shed light on wider electricity issues that could have national impact.

Gregory Reed, a professor of electric power engineering at the University of Pittsburgh who once worked at Con Ed, said the utility had done a good job in restoring power quickly, but said it underscores a need throughout the country to invest more in infrastructure.

“We have a lot of networks that have aging infrastructure and antiquated systems,” he said. “We have to build higher levels of resiliency.”

New York Gov. Andrew Cuomo and New York City Mayor Bill de Blasio both said they would be directing agencies under their control to look into what happened.

The questions raised by the blackout weren’t just about the power, they were political as well as de Blasio was criticized for being on the presidential campaign trail when the outage happened.

He returned to the city on Sunday, and insisted that the situation had been well-managed, that he had been in touch with his staff and started his trip back as soon as it became clear the blackout would not be quickly resolved.

“You have to take charge wherever you are, and I did that,” he said.

The outage stymied subway service throughout the city, affecting nearly every line. New York City’s Emergency Management Department said the A, C, D, E, F, M, 1, 2, 3, 4, 5, 6 and 7 trains had resumed running in both directions by around 2 a.m. Sunday. 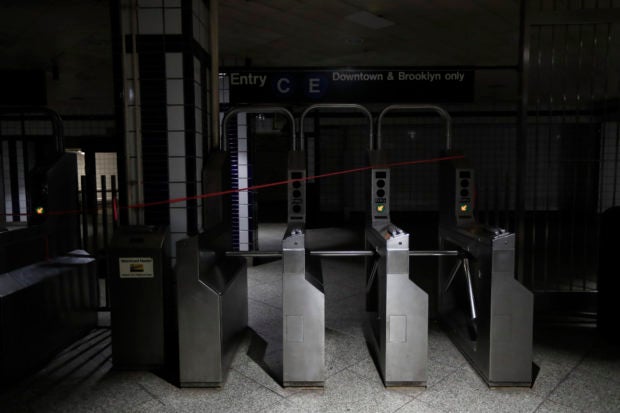 An entrance to the C and E trains at the 50th Street Subway Station is dimly lit during a power outage, Saturday, July 13, 2019, in New York. Authorities were scrambling to restore electricity to Manhattan following a power outage that knocked out Times Square’s towering electronic screens and darkened marquees in the theater district and left businesses without electricity, elevators stuck and subway cars stalled. (AP Photo/Michael Owens)

No injuries were reported.

The police and fire departments brought personnel and equipment in from other parts of the city to help, including 400 police officers and 100 traffic agents, as well as 93 additional ambulances.

The outage came on the anniversary of the 1977 New York City outage that left most of the city without power. /gsg