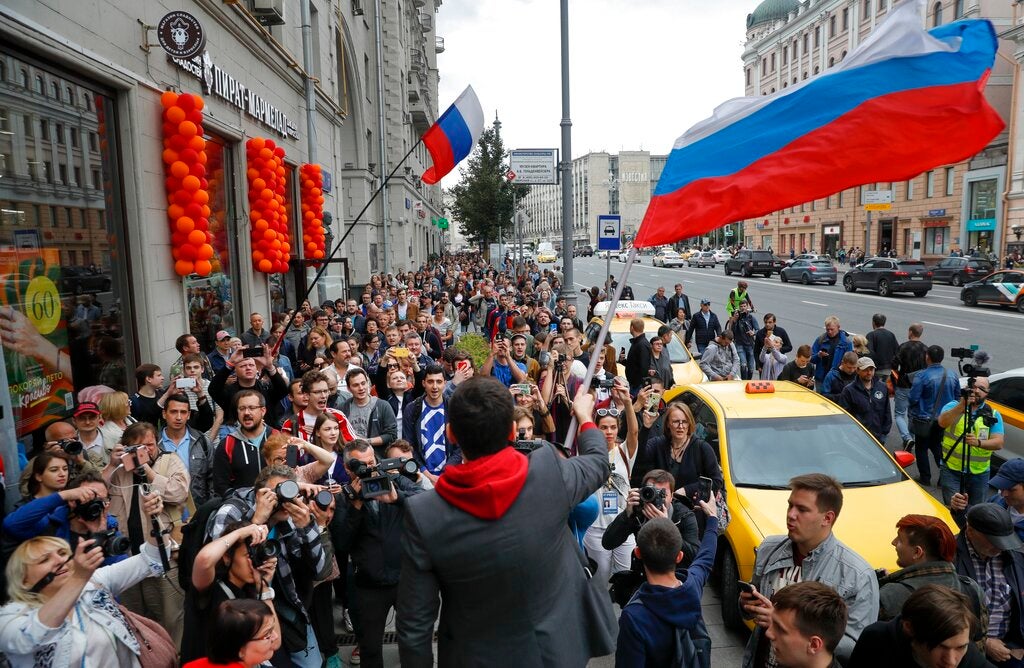 Russian opposition candidate Russian and activist Ilya Yashin, center back to a camera, waves a Russian flag during a protest in Moscow, Russia, Sunday, July 14, 2019. Opposition candidates who run for seats in the city legislature in September’s elections have complained that authorities try to bar them from the race by questioning the validity of signatures of city residents they must collect in order to qualify for the race. (AP)

MOSCOW — Russian opposition leaders led a rally in Moscow of about 1,000 people Sunday to protest the city election commission’s decision that will keep several opposition candidates off the ballot in a local election.

The unsanctioned rally was billed as a meeting between opposition leaders and voters after the Moscow election commission rejected signatures needed to qualify the candidates for the September city parliament election.

Demonstrators chanted “We are the authority here!” and “Putin is a thief.”

Police made no effort to intervene until later in the evening, after the protest crowd had largely dispersed and opposition leaders called for the remaining participants to stage an overnight sit-in at the election commission.

Alexei Navalny, Russia’s most prominent opposition leader, was not seen at the protest. The demonstration was led, in various stages, by opposition figures Dmitry Gudkov, Ilya Yashin and Lyubov Sobol.

“We were collecting the signatures under rain and in the heat,” Gudkov said. “And you know what (the election commission) told us yesterday? They told us that our signatures are fake. Many of the people who gave me their signatures are here today. Friends, do you agree?”

The crowd responded: “No!”

Yashin, one of the disqualified candidates, called on the crowd to march with him to the mayor’s office to state their election demands. They knocked on the doors of city hall, but no one answered.

“I think this is outrageous,” Sergei Bukharov, a former Moscow parliament press officer told The Associated Press outside city hall. “And what they say at the election commission, how they explain why they don’t admit independent candidates, it’s all lies. Those signatures are real.”

Opposition activist Sobol, who also is fighting to be on the September ballot, urged protesters to continue down the street to the election commission.

The march began fading out after three hours, though a few hundred protesters remained outside the election commission as of 7 p.m. Moscow time (GMT 16:00.)

An election commission spokesman told Yashin that chief Valentin Gorbunov would not meet with the demonstrators Sunday since he was spending the weekend at his cottage outside the city, the Ekho Moskvy radio station reported.

About 30 said they would stage a sit-in overnight in the courtyard of the commission’s offices. Moscow police intervened a little over an hour later, dispersing the holdouts and arresting Yashin, Sobol, and several other opposition candidates.

As of 9 p.m. Moscow time (GMT 18:00), at least 38 protesters had been detained, according to arrest monitoring group OVD-Info.

Yashin tweeted from the back of a police van that the demonstration had been brutally dispersed and that he was currently detained with at least 20 other people.