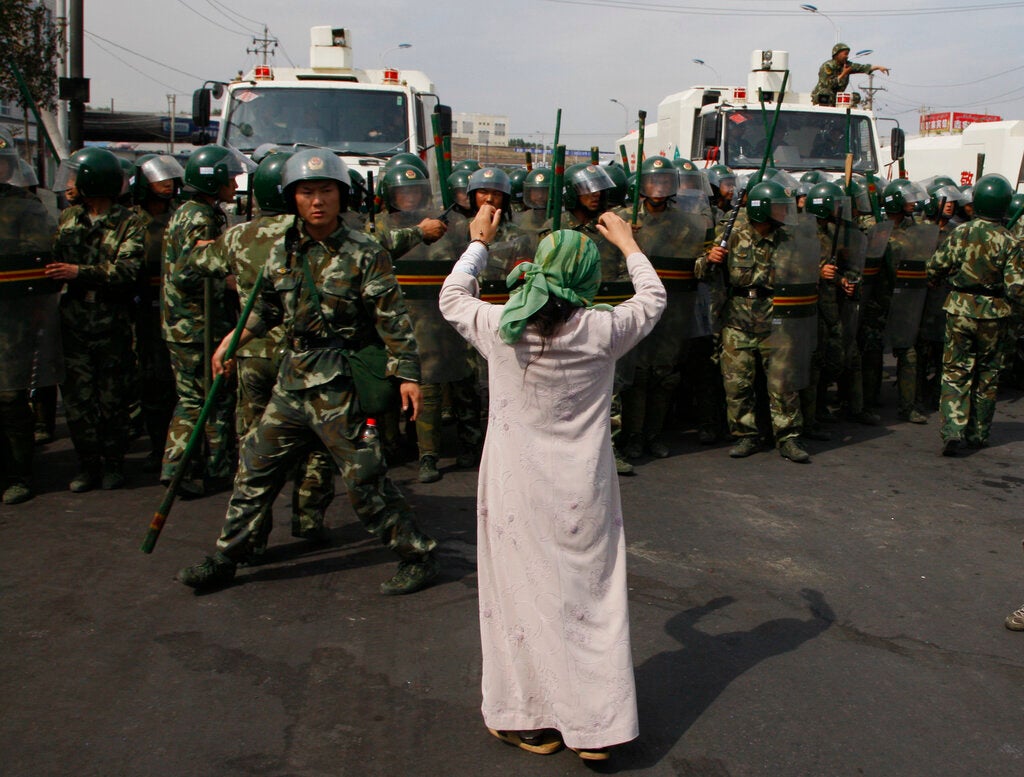 In this photo taken Tuesday, July 7, 2009, a Uighur woman protests before a group of paramilitary police when journalists visited the area in the aftermath of riots in Urumqi in western China’s Xinjiang region.  (AP)

ISTANBUL  — A decade after deadly riots tore through his hometown, Kamilane Abudushalamu still vividly recalls the violence that left him an exile.

On July 5, 2009, Abudushalamu was hiding with his father on the 10th floor of an office tower in Urumqi, the capital of China’s Xinjiang region that is home to the Turkic Uighur ethnic minority. By a park, he spotted a bus on fire. Then he heard a crack as a motorcycle nearby exploded.

Hours later, when he and his father stepped out to sprint home, he saw crowds of Uighurs stabbing Han Chinese in front of a middle school. The bodies of half a dozen people lay scattered on the streets — just a fraction of the estimated 200 killed that night.

Abudushalamu and tens of thousands of other Uighurs now live in Turkey, cut off from friends and family back home. Analysts say the Urumqi riots set in motion the harsh security measures now in place across Xinjiang, where about 1 million Uighurs, Kazakhs and other Muslims are estimated to be held in heavily guarded internment camps. Former detainees have told The Associated Press that within, they are subject to indoctrination and psychological torture.

Abudushalamu was just 9 years old when the riots took place. At the time, he knew he was witnessing something terrible, but he never imagined where the following years would lead.

“I thought Han and Uighur people could be at peace,” he said. “The camps? I never thought that would happen.” 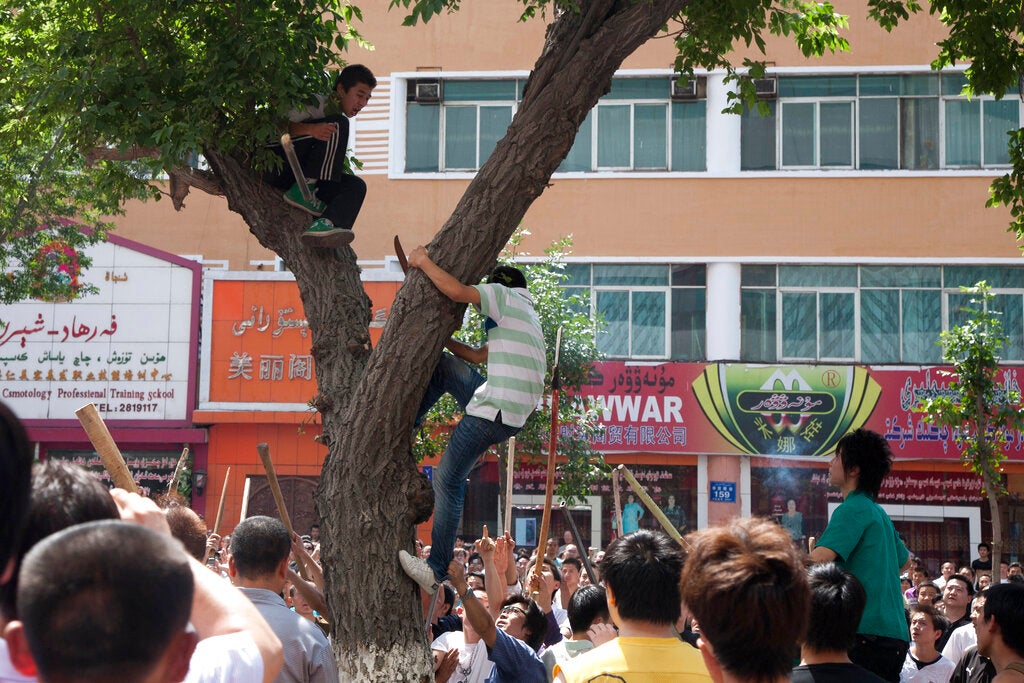 In this photo taken Tuesday, July 7, 2009, armed Han Chinese attempt to attack a suspected Uighur youth stuck in a tree in the aftermath of attacks by the Uighurs in Urumqi, western China’s Xinjiang province.  (AP)

The riots started as a peaceful protest.

Weeks before, Han workers killed at least two Uighur migrants in a brawl at a toy factory in Shaoguan, an industrial city in China’s coastal Guangdong province. The Han workers were angry about the alleged rapes of Han women by Uighur men, though a government investigation later concluded there was no evidence such an assault had taken place.

Images and videos of the brawl quickly circulated among Uighurs back in Xinjiang, including gory scenes of what appeared to be a Han Chinese man dragging a dead Uighur by his hair.

The videos enraged many Uighurs long upset with the Han-dominated government that took control of their region following the Communist revolution in 1949.

The litany of complaints was long: heavy restrictions on religious education, discrimination against college-educated Uighurs looking for jobs, subsidies and benefits for Han migrants to settle on lands once owned by Uighurs.

Among the most odious were threats from state officials of fines or even jail time if parents didn’t send their young, unmarried daughters to work in factories in inner China. “Hashar,” a program that forced farmers to pave roads, dig ditches, and clear land for crops for the government for no pay fueled further resentment.

The killed Uighur workers had been on a state employment program, sent more than 1,000 miles (1,600 kilometers) from home. For many, their deaths crystallized everything that was wrong about Beijing’s heavy-handed interventionist policies — and the belittling racism they felt they were subjected to by the Han Chinese.

The images spurred Urumqi students to organize a protest on July 5 demanding a government investigation. Demonstrators were stopped by police in the late afternoon, and tensions mounted until officers opened fire, Uighur witnesses say.

Two students present at the protests told AP that they were shot at. One recalled that as he turned and ran, bullets whizzed by his head and others around him dropped to the ground.

Furious Uighurs attacked Han civilians on the streets. An estimated 200 people were killed — stabbed, beaten or burned alive in the melees that followed. Uighurs smashed storefronts, overturned cars and buses and set some ablaze. 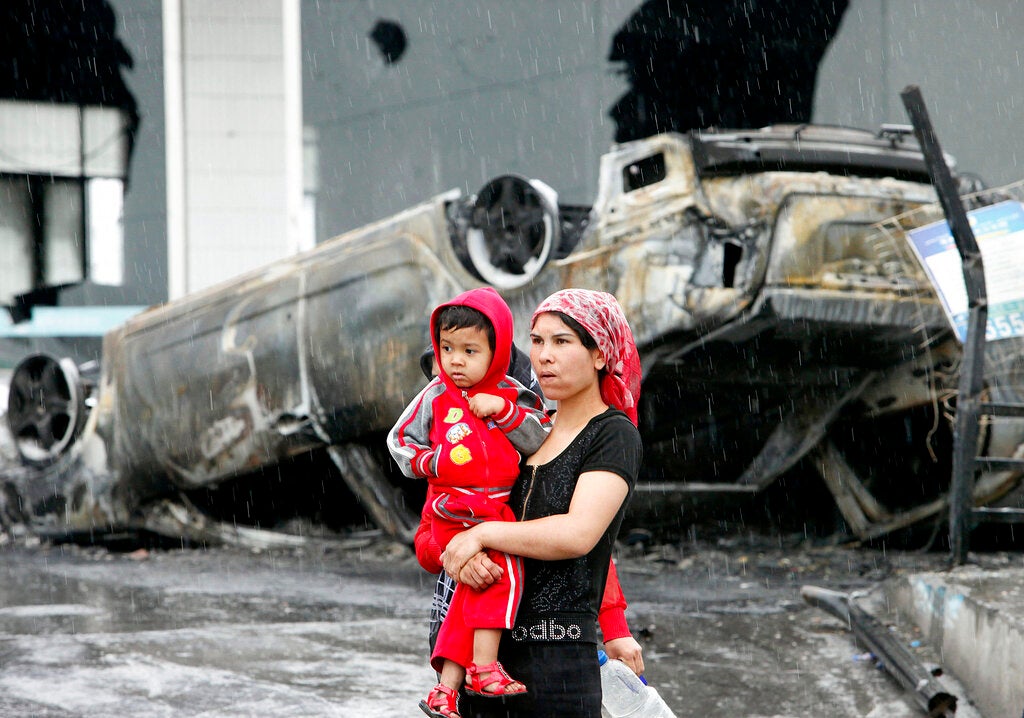 In this Wednesday, July 15, 2009, file photo, a Uighur woman and a child walk past a burned car at a destroyed dealership in the Uighur section following riots in Urumqi, western China’s Xinjiang province. (AP)

Abudushalamu hid with his family for days as mobs of Uighurs and Han killed each other in cycles of bloody revenge.

When they stepped outside a few days later, the streets were eerily empty, Abudushalamu said. Then the police arrived and started shooting.

“Two maybe SWAT team (members) came after me and shot at me,” said Abudushalamu, now 19. “The bullet went through right behind my right ear. I’m lucky I’m still alive.”

In the days after the violence on July 5, 2009, Beijing had sent in thousands of troops to restore order. For weeks, they fired tear gas, raided businesses and swept through Uighur neighborhoods to arrest hundreds, many of whom were punished with decades in prison. The entire region of 20 million people was cut off from the Internet for months in an attempt to curtail use of social media.

Normality had returned, but Xinjiang was never quite the same. Ethnic divisions hardened. Han Chinese avoided Uighur neighborhoods, and vice versa. Many Han Chinese steered clear of the whole of the region’s south, home to most of Xinjiang’s Uighurs, because they believed it was too dangerous.

Experts say that July 5 and the subsequent crackdown was a “turning point.”

“From that moment on, China took a very hard-line position toward the control of religion and the control of minority ethnic groups in the region,” said Nicholas Bequelin, Amnesty International’s regional director for East and Southeast Asia. “It increased dramatically its security operation. That really is what led to the situation today.”

In the following years, a series of violent terror attacks rocked Xinjiang and elsewhere. Dozens of civilians were hacked to death at a busy train station in China’s south. A Uighur drove a car into crowds at Beijing’s Tiananmen Square. Forty-three died when men threw bombs from two sports utility vehicles plowing through a busy market street in Urumqi.

“The more separatists attempt to sabotage our ethnic unity, the more we should try to reinforce it,” state media quoted Xi as saying. China’s ethnicities, Xi said, could and should be united like “the seeds of a pomegranate.”

Already tight limits on religion, culture, education and dress tightened even further, with restrictions on long beards and headscarves and the detentions of prominent Uighur academics and literary figures who were widely considered moderate advocates of traditional Uighur culture.

After a new party secretary was appointed to take control of Xinjiang in 2016, thousands began to vanish into a vast network of prison-like camps. Beijing calls them “vocational training centers” designed to ward off terrorism and root out extremist thoughts, but former detainees describe them as indoctrination centers which arbitrarily confine their inmates and subject them to torture and food deprivation.

That same year, Abudushalamu’s father had taken him to Turkey to study at a boarding school and then returned to China. The following June, he stopped responding to messages, and Abudushalamu never heard from his father again.

Abudushalamu finally discovered his father’s fate last year when an acquaintance in Turkey told him he saw his father in an internment camp. He says he has now heard of more than 50 family members that have been detained in Xinjiang. Researchers estimate the camps now hold 1 million or more Uighurs and other members of Xinjiang’s ethnic minorities.

Abudushalamu says there is no reason for authorities to “train” his father, a successful businessman who speaks nine languages.

“It’s delusional,” he said. “Why does he still need to be ‘educated”’? 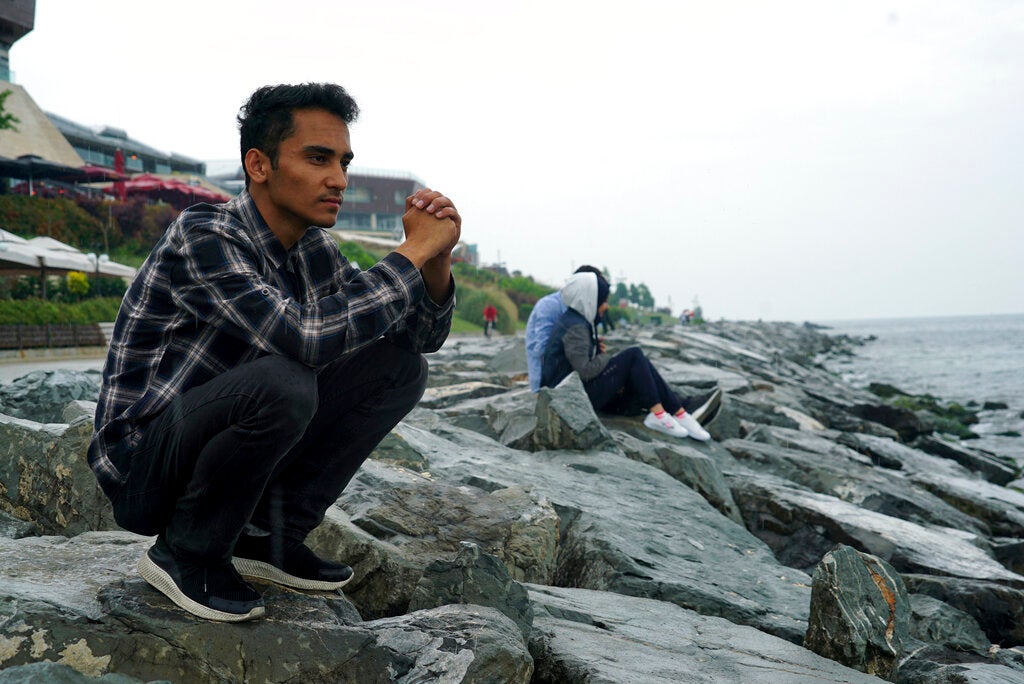 In this photo taken May 18, 2019, Kamilane Abudushalamu poses for a photo along a walkway by the Mediterranean Sea in Istanbul, Turkey. Kamilane Abdushalamu was nine on July 5, 2019 when Uighurs attacked Han civilians prompting clashes that killed an estimated 200 people. (AP)