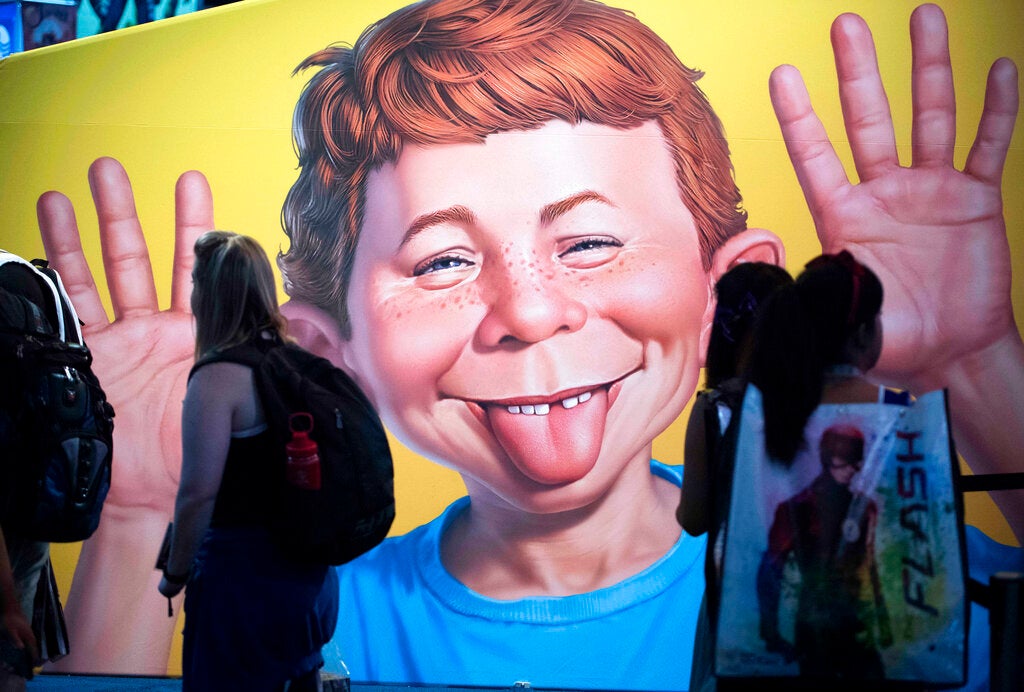 In this July 20, 2017 file photo the face of Alfred E. Neuman is framed by attendees at the DC booth during the first day of Comic-Con International at the San Diego Convention Center in San Diego, California.  MAD, the long-running satirical magazine that influenced everyone from “Weird Al” Yankovic to the writers of “The Simpsons,” will be leaving newsstands after its August 2019 issue. (The Orange County Register via AP)

SAN FRANCISCO — MAD, the long-running satirical magazine that influenced everyone from “Weird Al” Yankovic to the writers of “The Simpsons,” will be leaving newsstands after its August issue. Really.

The illustrated humor magazine — instantly recognizable by the gap-toothed smiling face of mascot Alfred E. Neuman — will still be available in comic shops and through mail to subscribers. But after its fall issue it will just reprint previously published material.

The only new material will come in special editions at the end of the year.

DC, the division of Warner Brothers that publishes the magazine, said MAD will pull from nostalgic cartoons and parodies published over the magazine’s 67-year run.

As Neuman would say, “What, me worry?” Worry not, for MAD has more than 550 issues packed full of political parodies and edgy humor to pull from.

The magazine set itself apart as a cultural beacon for decades with its unabashed tendency to make fun of anything and push conventional boundaries. One of MAD’s best known comic series, Spy vs. Spy, featured two spies with beak-like faces and big eyes — costumes that are still regularly worn on Halloween.

It even seemingly parodied fellow popular magazine Playboy, with its Fold-In feature that appeared in nearly every issue. But instead of featuring scantily-clad models, the Fold-In printed — what else? — another joke.

“It’s pretty much the reason I turned out weird,” he wrote on Twitter.

Josh Weinstein, a writer and producer of “The Simpsons” — which has referenced MAD many times — thanked the magazine on Twitter for its inspiring effect on eras of comedy.

“There was a moment in so many of our childhoods where you were the greatest thing ever,” he wrote.

Comedian Harry Shearer, the voice of several characters on “The Simpsons,” cracked on Twitter: “An American institution has closed. And who wants to live in an institution?”

When President Donald Trump referred to Democratic presidential candidate Pete Buttigieg as Neuman, while insisting he wouldn’t be fit to serve as president, the 37-year-old candidate said he had to Google the reference.

“I guess it’s just a generational thing,” Buttigieg told Politico. “I didn’t get the reference.”

Cartoonist Evan Dorkin, who worked for MAD, wrote on Twitter that the magazine was long a source of happiness and inspiration for him.

“I hope we provided some smiles to some readers of the past 12 yrs,” he wrote.

The magazine changed as its circumstances did, he wrote, including when the magazine began printing advertisements in 2001 and when it moved from New York City to Burbank, California, at the end of 2017. That move warped MAD’s identity, Dorkin said.

MAD was long a venue for comic artists and cartoonists to grow artistically and shape national conversation. Well-known names such as Al Jaffee, Harvey Kurtzman and Mort Drucker were associated with the magazine for decades.