Son of ex-governor, 4 others killed in checkpoint ‘firefight’ 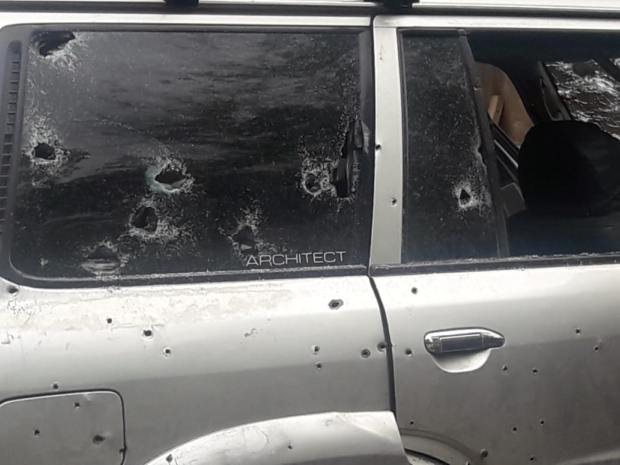 The bullet-riddled vehicle of Datu Hashim Matalam, son of the late Maguindanao Gov. Norodin Matalam. Datu Hashim and four others were killed when they traded shots with soldiers at a checkpoint in Pikit, Cotabato, according to Army brigade commander Brig. Gen. Alfredo del Rosario. (Photo by Anwar Emblawa)

ZAMBOANGA CITY, Zamboanga del Sur, Philippines — Five men, including a son of a former governor of Maguindanao province, were killed after they allegedly shot it out with government troops manning a checkpoint in Pikit, Cotabato province, around 9 p.m. on Friday.

Lt. Gen. Cirilito Sobejana, commander of the Western Mindanao Command (Westmincom), told the Inquirer the slain men had attempted to evade inspection at two Army checkpoints along the national highway.

“They disregarded the first checkpoint. They sped past it, despite the presence of our troops at the checkpoint,” Sobejana said.

“At the second checkpoint, our troops were already alerted. So when they were about to halt the speeding SUV (sports utility vehicle), the armed men started shooting at the troops manning the checkpoint, and it [resulted] in an armed confrontation,” Sobejana added.

No soldier was reportedly wounded in the shootout.

According to Sobejana, the speeding vehicle was headed in the direction of Cotabato City.

Only two of the five men had been identified as of 5 p.m. on Saturday.

“The Soco (Scene of the Crime Operatives) unit is working overtime to ascertain the identities of the three others,” Sobejana said.

Brig. Gen. Alfredo del Rosario, commander of the Army’s 601st Infantry Brigade, said the body of Matalam had been claimed by his family.

Sobejana said an M16 Armalite and two M653 rifles, an M1911 pistol, a hand grenade, and a rifle grenade were recovered from the suspects’ Nissan Patrol, with license plate number LEM-521.

Three sachets of suspected “shabu” (crystal meth) and paraphernalia for using the drug were also found in the vehicle, he added.

The owner of the vehicle was not immediately identified.

Noraisa Matalam said they were “leaving everything to Allah” because blaming anyone would not bring back the life of her son.

But she defended Hashim, saying she doubted whether he could do what he was accused of by the military.

“On the information about the weapons recovered, it could be owned by his companions,” Noraisa said in a radio interview in Cotabato City.

Maj. Arvin John Encinas, spokesperson for Westmincom, said in a statement the military checkpoint operations at Barangay Inug-ug in Pikit town were “routine” and manned by troops of the Army’s 7th Infantry Battalion and policemen from Pikit Municipal Police Station.

Sobejana commended the soldiers and policemen for their vigilance.

“Your steadfastness will bear more accomplishments in our internal security campaign to defeat lawlessness in Mindanao,” he said.

Troops will continue to carry out the campaign against lawlessness and loose firearms in Mindanao, which is still under martial law, Sobejana said.

“The same efforts will be made to facilitate ‘rido’ settlements in our bid to bring security and development in communities,” he added.

Rido is a type of retaliatory violence between families and clans, as well as between communities. —With reports from Edwin Fernandez and Jeoffrey Maitem

Read Next
Armed Utah teachers practice responding to school shootings
EDITORS' PICK
Smart releases Hyun Bin’s second TVC
Water remains our saving grace right now
EuroMillions Superdraw: A lottery draw unlike any other is coming to the Philippines
Stress and PH millennials amid pandemic: What surveys found
‘Keep our silence:’ Duterte tells troops not to avenge slain agents
Duterte signs terror law amid wide opposition
MOST READ
Duterte tells military: No other president looked at you the way I did
Duterte signs terror law amid wide opposition
Locsin warns of ‘severest response’ if China’s army drills in SCS ‘spill over’ to PH domain
VP Leni Robredo: ‘Remember, you were made for these times’
Don't miss out on the latest news and information.