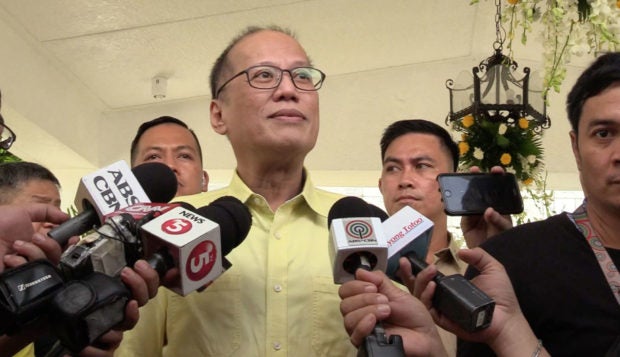 MANILA, Philippines – The Office of the Ombudsman has no plans of pursuing homicide case against former President Benigno Aquino III for the botched Mamasapano operation.

According to Ombudsman Samuel Martires on Friday, he respects the decision of his predecessor, former Ombudsman Conchita Carpio Morales, who turned down homicide complaints against the former chief executive.

“Wala, why should I?” Martires said in an interview after the hearing of his previous motion to withdraw the graft and usurpation charges against Aquino at the Sandiganbayan.

“I respect the decision of my predecessor, why should I?” he told reporters.

However, he clarified that petitioners, including the Volunteers Against Crime and Corruption (VACC) can still file homicide against Aquino if they want to do so.

“They are free to do what they want,” he added.

VACC filed homicide complaints against Aquino in 2016, however, then Ombudsman Morales rejected the case and filed graft and usurpation charges before the Sandiganbayan instead. The group claimed that it was a deliberate attempt by Morales — appointed by Aquino — to downgrade the cases.

Martires earlier said that the charges against Aquino should be withdrawn because he, as president, has authority over all the police officers. The Sandiganbayan Fourth Division decided to wait on the Supreme Court’s to lift the temporary restraining order (TRO) before hearing the motion./ac