MANILA, Philippines – National Security Adviser Hermogenes Esperon Jr. has lodged a perjury complaint against the cause-oriented groups tagged by the government as associated with the Communist Party of the Philippines. 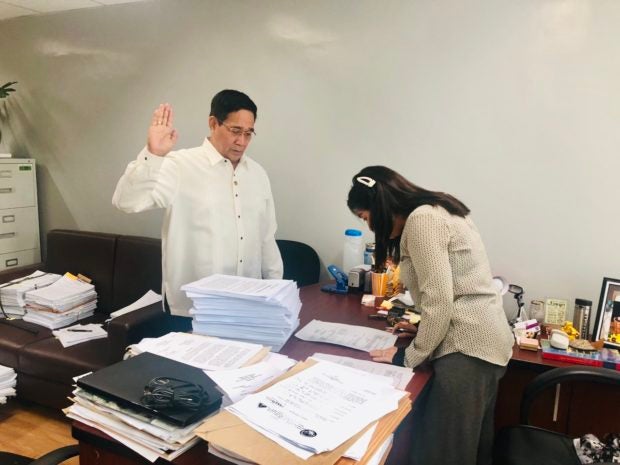 In his three-page affidavit, Esperon accused the groups of issuing false statements in their writs of amparo and habeas data petition, which they filed to get court protection from alleged military harassment and red-tagging.

Esperon alleged that the certificate of registration of the RMP had long been revoked, contrary to what was stated in its petition that it was a registered organization.

He attached a certification from the Security and Exchange Commission (SEC) dated April 15, 2019.

“Contrary however to the verification and certification executed by petitioners, the SEC already revoked the certificate of registration of RMP on Aug. 20, 2003 for its failure to submit the required General Information sheets and Financial Statements from 1997 to 2002,” Esperon said in his complaint.

He argued that the groups “swore that the allegations of the facts therein are true and correct based on their personal knowledge and authentic documents” in their petition.

RMP describes itself as a registered non-profit organization of the religious, priests, and lay people.

It accused state forces of killing one of their members.

RMP, Karapatan and Gabriela have earlier sought a protective writ and habeas data from the Supreme Court on the supposed red-tagging and smear campaign by the Philippine government.

The military accused the groups of serving as a legal front of the Communist Party of the Philippines.

RMP was named as one of the groups using financial assistance from the European Union and Belgium to “radicalize” children in rural areas.

RMP has denied the allegations.

The Court of Appeals has recently dismissed the petition for writ of amparo and habeas data filed by the three groups for failing to substantiate their allegations of enforced disappearances and extrajudicial killing of their members.

The writ of amparo was instituted by the Supreme Court in 2007 as a legal remedy to any person who feels that his or her life, liberty and security is threatened by an unlawful act or omission of a government official.

The writ of habeas data, meanwhile, was introduced by the Supreme Court in 2008.

It allows individuals the right to find out what information is being kept about them by the government, and to demand their updating, rectification or destruction. /gsg