Manila not ready for ‘The Big One’; Moreno bats for reforms

MANILA, Phlilippines – The nation’s capital is not ready for a major earthquake or “The Big one”, the City Disaster Risk Reduction and Management Office (CDDRMO) admitted to Manila Mayor Francisco “Isko” Moreno Domagoso during a meeting at the Manila City Hall. 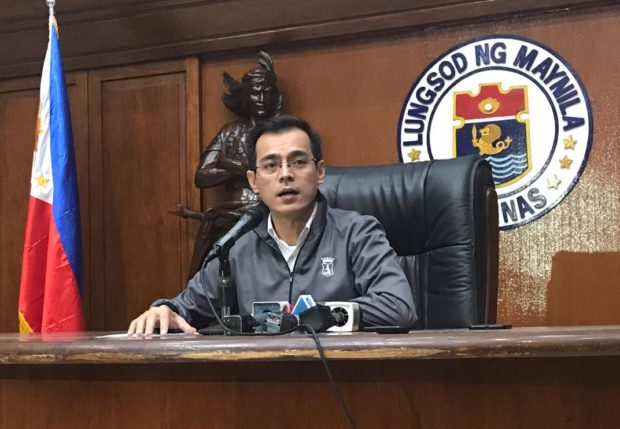 Moreno rued the city of Manila’s lack  of resources and capability to respond to disasters.

He said that hospital bed capacity, power generators, and available personnel are not enough to attend to casualties in case of a major earthquake or calamity.

“I will fire you if you don’t admit that we are not ready. You have to be honest with yourself. You can even challenge me at the Civil Service (Commission) if I fire you,” Domagoso told council members.

“Here in this disaster council, mabigat ang ating responsibility, because lives are at stake,” he pointed out.

In 2015, a Metropolitan Manila Earthquake Impact Reduction Study showed that a magnitude 7.2 earthquake may result in the collapse of 170,000 residential houses and the death of 34,000 people.

Based on the report of the Department of the Interior and Local Government (DILG), Manila’s disaster preparedness was rated a “total failure.”

Aside from the failing remark given by the DILG, Manila’s command center for disaster response, dubbed as the “Emergency Response Assistance Program (ERAP)”, was also found to be dilapidated.

Disaster response employees further revealed that ERAP doesn’t even have its own hotline, and they use only their personal mobile numbers to communicate with the public.

Hence, Moreno urged the council to come up with a new disaster risk reduction and management plan and a new hazards, vulnerability and risk assessment report for the city of Manila.

“We now have a receptive local government that is open to new ideas. This is your time to shine,” Moreno said.

“In one or two weeks time, you must present a different plan of action as if you are in command and in control of the situation. Work as if you’re the Mayor. Put your best effort into it,” he added.

During his State of the City Address last Monday, Moreno revealed that the previous city administration spent P2.9 billion for commercial contracts.

These are delivery of goods and sudden completion of construction that the city administration has to pay.

According to Moreno, he has never seen that huge amount of money being spent in just a span of 30 days, citing that on July 21, the past administration spent about P300 million for the said commercial contracts. (Editor: Gilbert S. Gaviola)