HOUSTON – The acting head of U.S. Customs and Border Protection resigned Tuesday amid an uproar over the discovery of migrant children being held in pitiful conditions at one of the agency’s stations in Texas.

Acting Commissioner John Sanders’ departure deepened the sense of crisis and added to the rapid turnover inside the agencies responsible for enforcing President Donald Trump’s hardline immigration priorities as the U.S. deals with record numbers of migrant families coming across the border. 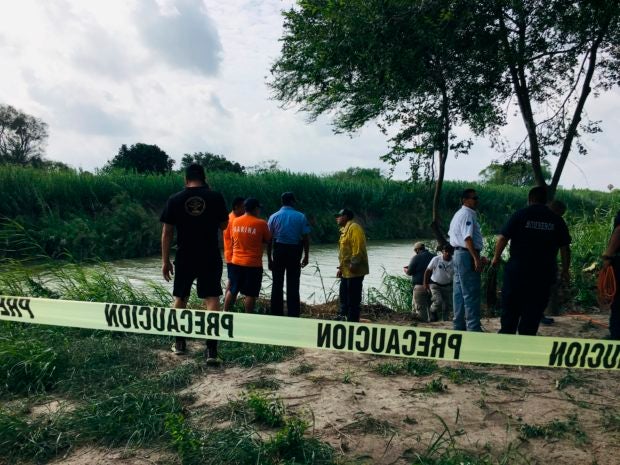 Authorities stand behind yellow warning tape along the Rio Grande bank where the bodies of Salvadoran migrant Oscar Alberto Martínez Ramírez and his nearly 2-year-old daughter Valeria were found, in Matamoros, Mexico, Monday, June 24, 2019, after they drowned trying to cross the river to Brownsville, Texas. Martinez’ wife, Tania told Mexican authorities she watched her husband and child disappear in the strong current. (AP Photo/Julia Le Duc)

In a message to employees, Sanders said he would step down on July 5. He did not give a reason for leaving.

“Although I will leave it to you to determine whether I was successful, I can unequivocally say that helping support the amazing men and women of CBP has been the most fulfilling and satisfying opportunity of my career,” he said.

Hours after Sanders’ departure became public, two officials told The Associated Press that he was being replaced by Mark Morgan, who was named acting director of U.S. Immigration and Customs Enforcement just last month.

The officials were not authorized to speak publicly about the move and declined to be identified.

In an interview last week, Sanders blamed the problems in detention on a lack of money. He called on Congress to pass a $4.5 billion emergency funding bill to address the crisis — legislation the House was planning to take up Tuesday.

At the White House, Trump said that he did not ask for Sanders’ resignation — adding that he doesn’t think he has ever spoken to the man — but that he is “moving some people around into different locations” amid the crisis.

While activists welcomed Sanders’ departure, Trump defended U.S. border authorities, saying, “The laws are so bad and the asylum rules and laws are so bad that our Border Patrol people, who are so incredible, aren’t allowed to do their jobs.”

The unprecedented surge of migrant families has left U.S. immigration detention centers severely overcrowded and taxed the government’s ability to provide medical care and other attention.

Six children have died since September after being detained by border agents.

After he was picked to lead ICE, Morgan, the new acting director, showed a willingness to deport families during enforcement sweeps. However, past Trump immigration officials hesitated over concerns about logistics and the public’s reaction.

The Trump administration has faced a barrage of criticism in recent days over conditions inside the Border Patrol facility in Clint, Texas, first reported by The Associated Press: inadequate food, lack of medical care, no soap, and older children trying to care for toddlers.

In one case reported in Clint, attorneys said a 2-year-old boy without a diaper was being watched by older children.

Several youngsters had the flu. Many were separated from extended family members like aunts and uncles who brought them to the border; others were teenage mothers with babies.

As word of the children’s plight got out, people moved by their stories started showing up the station’s doors to donate boxes of diapers and even a Cookie Monster stuffed toy.

They were not allowed in the building. Customs and Border Protection says it has enough supplies, but was checking with lawyers to see if it could accept donated items.

An official from Customs and Border Protection said Tuesday that the majority of the roughly 300 children detained at Clint last week had been moved to facilities operated by the Office of Refugee Resettlement.

The official, who briefed reporters on the condition of anonymity, wouldn’t say exactly how many. /gsg