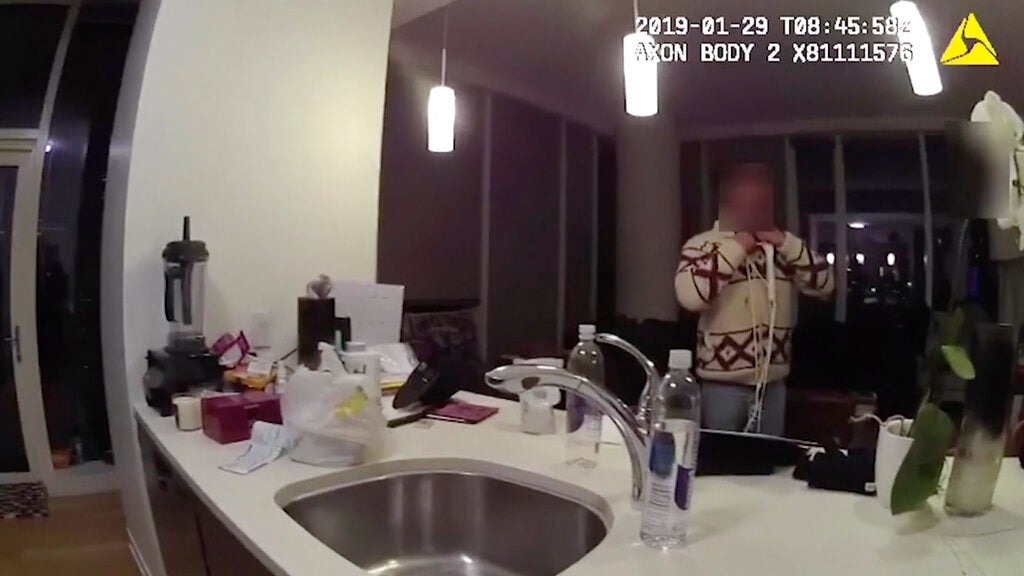 This Jan. 29, 2019, image made from police body cam video provided by the Chicago Police Department purports to show Jussie Smollett, with a white rope wrapped around his neck, talking with police officers in his apartment in Chicago. Chicago police on Monday, June 24, released hundreds of files from the investigation into Smollett’s claim he was attacked by two men, including releasing the video footage for the first time of the “Empire” actor wearing the thin white rope wrapped around his neck that he told detectives was a noose. The footage from the Chicago police blurred out Smollett’s face because, police explained, he was considered a victim at that point. (Chicago Police Department via AP)

CHICAGO — Chicago police on Monday released more than 1,000 files from the investigation into Jussie Smollett’s claim he was attacked by two men, including video footage that for the first time shows the “Empire” actor with a thin, white rope wrapped around his neck that he told detectives was a noose.

The footage from body cameras worn by police officers who responded on Jan. 29 to what Smollett said was a racist and homophobic attack by two large men has Smollett’s face blurred out because, as police explained, he was considered a victim at that point. The footage shows officers walking into the apartment, where they encounter the actor wearing the rope, before one asks him, “Do you want to take it off or anything?”

“Yeah, I do. I just wanted you all to see it,” Smollett says before unwinding the rope, loosening it and placing it on the kitchen counter.

Police have said he told them the attackers wrapped the rope around his neck.

In the video, he tells officers that the attackers poured bleach on him. After he is informed about the recording Smollett says he doesn’t want to be filmed and the camera is turned off.

In all, police released nearly 1,200 different individual files on Monday, including thousands of pages of documents, arrest reports and handwritten notes from police. Added up, there is more than 90 hours of video, much of it hour after hour of surveillance cameras high above city streets.

As the hunt for the two men Smollett said attacked him continued for weeks, some in the city started to wonder if the whole thing was a hoax. And those suspicions made it into the documents.

On Feb. 1, Cmdr. Edward Wodnicki urged investigators to confirm key information given by Smollett about the night in question: “Verify and I mean verify that the victim got off a plane at O’Hare. Big issue if that was a lie. CALL me as soon as this is completed.”

It was, in fact, confirmed.

Then on Feb. 25, a sergeant sent an email saying that she’d received a tip from a caller whose name is redacted. “He has a friend close to the inner circle of the subject,” the email reads. “The friend shared that the entire event was orchestrated by (redacted).”

The footage itself illustrates the growing skepticism within the Chicago Police Department, starting with the fact that much of it was retrieved from surveillance cameras. Police collected the footage as they tried to piece together the route that two brothers took across the city to the spot where police say they acted out a staged attack of the actor.

The department released footage that shows the two brothers, Abimbola “Abel” Osundairo and Olabinjo “Ola” Osundairo, in a cab the night of the incident. Both are wearing what appear to be light-colored hazmat suits and gloves, with one of the brothers tightening his around his face.

There is also footage of officers handcuffing the brothers — who have acknowledged participating in a staged attack — on the tarmac at Chicago’s O’Hare International Airport when they returned on a flight to Chicago from Nigeria, and putting them in police cars for a trip to a city police station where they were detained.

Monday’s release of documents and video files was not expected to shed much new light on what happened — largely because so much information has already been made public in the case. In February, for example, when the charges were announced, Police Superintendent Eddie Johnson laid out in minute detail how investigators came to conclude that the incident was not a hate crime as Smollett claimed but a carefully staged hoax directed by the actor himself to promote his career.

Police said when Smollett was charged that there was no footage of the actual staged attack because the surveillance camera they said Smollett hoped would capture the incident was, unbeknownst to him, not working.

Among the footage released Monday is that of Smollett’s creative director Frank Gatson meeting officers in the lobby of the Chicago high-rise apartment building and giving them a summary of the evening as they take the elevator to Smollett’s apartment. Gatson tells officers that the alleged attack made him emotional.

“They put a makeshift, what do you call that thing, a noose around his (expletive) neck,” he tells officers.

On Monday, Smollett’s attorneys did not respond to a request for comment.

Fox Entertainment announced in April that Smollett would not appear in the sixth and final season of “Empire.”