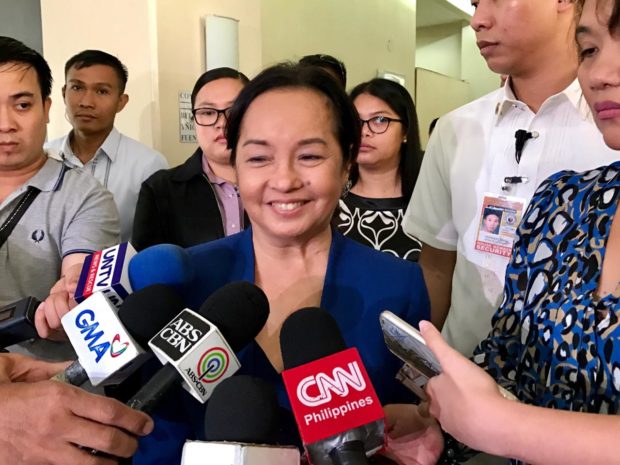 MANILA, Philippines – Former president and outgoing House Speaker Gloria Macapagal-Arroyo has insisted that she will quit politics after her term, although her consultant stint with the Pampanga provincial government will continue.

Arroyo said in an ambush interview on Tuesday that as consultant, she will focus on the development of the Pampanga Megalopolis Plan.

“They asked me to help them from time to time, to be a consultant. So, I’d be happy to do that.  Tapos sinabi ko where I think I can help is to follow through on the implementation of Pampanga Megalopolis Plan,” she said.

According to Arroyo, a native of Lubao town in the province, the Megalopolis plan is the vision of the Pampanga government to attract more establishments, investments, and tourists by creating infrastructure projects such as roads and train systems giving people direct and fast access to airports.

This in turn will also help decongest Metro Manila, she said.

“Malaking bagay kase ang infrastructure ng airport. Meron din kaming aquapolis. Duon sa aming lugar like my town we are very, very big aquaculture aeropolis that will be the economy built around the airport,” she added.

Arroyo, in her third term as Lubao representative, made a comeback to national politics after she was elected House Speaker by majority of lawmakers just before President Rodrigo Duterte was set to deliver his third State of the Nation Address on July 23, 2018.

Before being Speaker and Lubao lawmaker, Arroyo succeeded former President Joseph Estrada who was forced to step down after the People Power 2 revolution brought about by the plunder allegations.  Arroyo was president from 2001 to 2004.  She ran in the 2004 elections, where she secured a full six-year term as president.

Arroyo’s administration is being credited for the country’s robust economic standing amid recessions in other parts of the world.  However, her administration was also plagued with corruption issues like the NBN-ZTE deal and the fertilizer fund scam. Her administration also weather several coup attempts launched by dissatisfied military officers. (Editor: Jonathan P. Vicente)