Dads, moms give hundreds of free hugs at Pride parade in Pittsburgh 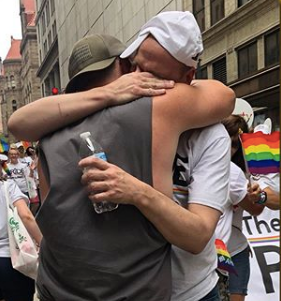 A group of moms and dads took to the Pittsburgh Pride parade last June 9 where they gave out hundreds of free hugs to complete strangers.

One dad, Howie Dittman, was a part of the “Free Mom Hugs” event at the Pittsburgh parade. He shared on Facebook that he and other parents sported “Free Dad Hugs” and “Free Mom Hugs” T-shirts and gave out hundreds of hugs during the parade.

“We gave out hundreds of hugs. Hundreds,” Dittman said. “Some were super happy hugs. But others were like these two… and there were way too many like them.”

In his post, Dittman shared his emotional encounter with two Pride attendees. In his collage photo, Dittman can be seen hugging a man and, in the other, a young woman. According to him, the man was kicked out at 19 years old after his parents found out about his identity.

“He cried on my shoulder. Sobbed. Squeezed me with everything he had,” Dittman said. “I felt a tiny bit of that pain that he carries with him every minute of every day. He was abandoned because of who he loves.”

PARENTS.A handful of us went to the Pittsburgh Pride Parade today, sporting our FREE DAD HUGS and FREE MOM HUGS…

Meanwhile, he shared he does not know the specifics of the young woman’s story, saying she saw him from across the street. By the time she got to him, she had tears in her eyes.

“She stood in front of me and looked up at me, with a look of sadness and helplessness that I’ll never forget. She hugged me with everything she had,” he said. “And I hugged her back. She held on for so long, melting into me, and thanked me endlessly. And I can’t stop thinking about her. What she must be going thru with her family… the ones who are supposed to be there for her no matter what.”

Dittman’s encounter with the young woman made him wonder about who she possibly runs to when she needs advice or wants to share memories with someone that only her own parents would have been there for.

“How often does she hope for that phone call, with unconditional love on the other end? I don’t know her story. But it doesn’t feel like a huge leap to assume she’s lost those who should love her the most and forever.”

In the end, Dittman addressed parents on social media, telling them to just imagine their own children feeling so lost from them to the point that they seek comfort from strangers.

“Think of the depths of their pain,” he said. “Try to imagine how deep those cuts must be.”

In the end, Dittman advised parents not to be the kind who would let their own child shoulder such a heavy burden. He also said he does not know the identities of the man and young woman he met, adding he is just there should they need a “surrogate dad” to talk to.

“And if by chance anyone knows these folks, please let them know they can reach out any time they need a surrogate dad to talk to,” said Dittman. “I’ll be there.” /ra

Read Next
Japan pushes 300 North Korean boats out of fishing grounds
EDITORS' PICK
Nestlé Philippines’ ‘NESCAFÉ Plan’ bags Grand Anvil at PRSP 56th Anvil Awards
Smart reinforces superiority with best speed and mobile video experience in PH
Every Filipino home can now be a smart home with realme TechLife
New 3,045 COVID-19 cases push PH total active cases to 40,074
LTO’s P500-M deal for screws draws scrutiny
How to lose a PH genius: Wesley So officially a US citizen
MOST READ
How to lose a Filipino genius: Wesley So officially a US citizen
US lays out list of aid to ‘satisfy’ Duterte following VFA payment demand
Robredo on Sara Duterte leading poll surveys: Why are Filipinos drawn to leadership of this kind?
Rights lawyer survives attack by playing dead, loses all case files
Don't miss out on the latest news and information.