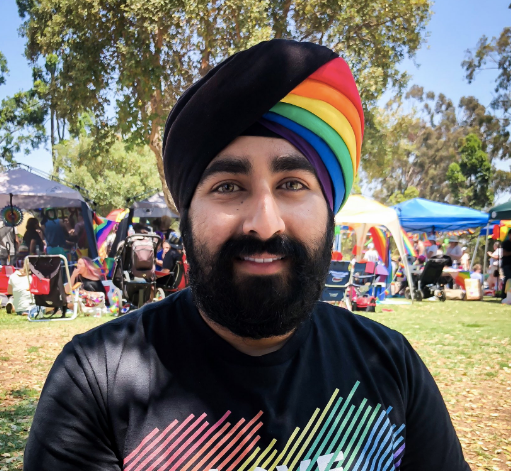 A bisexual man from California, United States has inspired netizens the world over by putting a colorful twist in his Sikh turban.

Jiwandeep Kohli, a clinical psychology graduate student and amateur baker, shared a photo of him wearing the rainbow turban on social media last June 2 (June 1 in the United States). Kohli marked the beginning of Pride month with his photo and took pride in being a “bisexual bearded baking brain scientist.”

“I feel fortunate to be able to express all these aspects of my identity, and will continue to work toward ensuring the same freedom for others,” Kohli said. “#PrideMonth #PrideTurban #LoveIsLove.”

I’m proud to be a bisexual bearded baking brain scientist. I feel fortunate to be able to express all these aspects of my identity, and will continue to work toward ensuring the same freedom for others. #PrideMonth  #PrideTurban #LoveIsLove pic.twitter.com/SVhc0iwDF0

Kohli’s tweet has since gone viral, garnering over 34,000 favorites and over 5,000 retweets as of this writing. As per BuzzFeed News on June 3, Kohli actually wore the turban to the San Diego Pride March last 2018 and decided to reshare the photo on Twitter. Kohli apparently was inspired after seeing another Sikh man at a pride parade wearing a colorful turban years prior.

“I was looking at that and I realized the way I tie mine, it had the exact right number of layers to make a rainbow,” Kohli said in the report. “I’ve been really enamored with the reaction I’ve gotten from people.”

Kohli, who was a former contestant at “The Great American Baking Show”, was not expecting his photo would go viral, but is happy nonetheless over the positivity he has received from people.

Many have also asked him how to get their own rainbow turban, but for Kohli, it it is not as simple as just putting on a hat and said wearing turbans is a serious responsibility for Sikhs.

“I wouldn’t want people to have the impression that I’m just wearing it as an accessory,” he added. “A turban is a sign to the world that you’re a person the world can turn to for help.” Cody Cepeda/JB