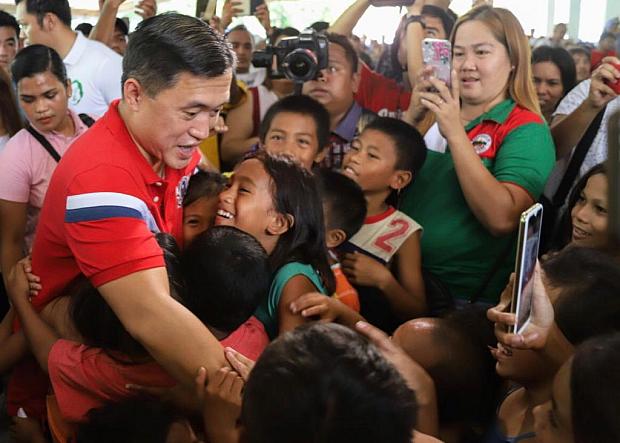 MANILA, Philippines – Incoming Sen. Christopher Lawrence “Bong” Go celebrated Father’s Day on Sunday in Purok Kagaykay in Barangay 2 in Bacolod, which was hit by a fire on June 10, displacing about 1,200 individuals.

He promised to treat the children and their fathers to a small celebration on Father’s Day.

“I’m greeting all the fathers. This is the day that, as I said, I hope we can give back to our fathers or to our children. As I told those whose homes were burned here, go out with your children, and I, as a father, will pick up the tab of your treat to them,” Go, speaking in Filipino, said in an ambush interview.

“We also have here representatives from the DTI [Department of Trade and Industry] and the local government to give you livelihood opportunities to help you recover quickly,” he said.

As they ate, he traded stories and expressed solidarity with them in their effort to earn a decent living.

As in his previous visits to other communities that had been struck by fire, Go coordinated with the National Housing Authority to provide displaced people with an opportunity to avail of housing assistance, with a deferment of amortization for the first year, to help them recover quickly.

Go also repeated here his commitment to have a review of fire safety and prevention measures, particularly in areas that are considered fire prone, like informal settlements.

The senator added that he would push for measures that would provide affordable houses for all.

“We need a long term affordable housing program,” he said. “One of the measures I would like to push for is to have a long-term housing roadmap or plan so can address the shortage of 6.5 million housing units. There should be no squatters in our own country.”

Go also touched on his other programs, such as affordable medical services through his Malasakit Center, which he had outlined during the campaign period and at his proclamation as a senator.

READ: Bong Go bares plans at his proclamation as senator

Towards the end of his speech, Go shared this message to the public: “You know that we all pass through this world just once. So let’s give whatever we can to help others. For me, serving the people is serving God.”

“I’m greeting President Duterte as your father who truly loves you. And I, your Kuya Bong Go, am also a father. President Duterte and I love you, and we consider you like our children and our siblings. We have no other aim but to serve you.”