Bong Go bares plans at his proclamation as senator 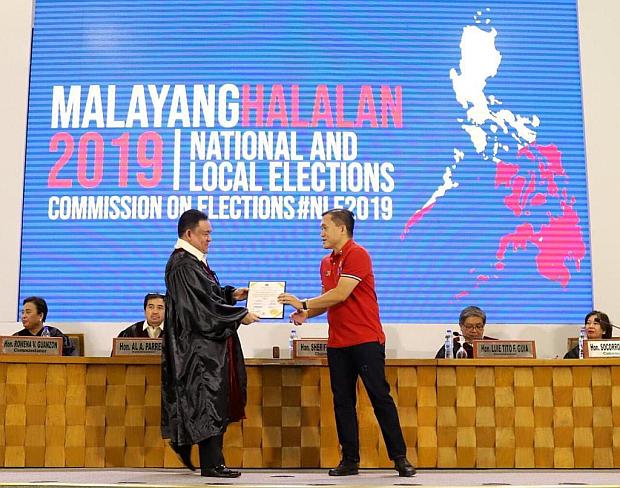 Senator-elect Christopher “Bong” Go was proclaimed, along the 11 other new legislators, on Wednesday, May 22, 2019, at the PICC. (Contributed photo)

MANILA, Philippines — Senator-elect Christopher Lawrence “Bong” Go, who placed third place in the final tally of the 2019 senatorial race, shared his plans as a legislator right after the proclamation rites, which was held on Wednesday at the Philippine International Convention Center (PICC) in Pasay.

Then he went straight to work, heading for Caloocan City to visit 480 residents of Barangay 49 in District 2 who were affected by a fire struck the areas last May 14.

[To my fellow Filipinos, thank you very much for the support and trust. Now I’m going back to service. I will just continue working. I’m ready to give more service to our brothers.]

Noting that he had been preparing for the job with his 21 years in government, Go vowed to continue people-centered, service-oriented advocacies he started even before being elected as a senator.

[I will bring service to the Senate — service that cares for people, service with the Duterte brand.]

More than that, he said: “I will not limit myself to just being a legislator. My work will not only be confined to the four corners of the Senate hall.”

He said he would continue to go around the country and talk to people.

To facilitate this, he said he would put up an extension office in the Visayas and Mindanao so that people could easier access to him.

Thes offices, like his Malasakit Center, would be open to everyone who would want to have suggestions about legislation.

Go’s legislative agenda, apart from the three-pronged campaign against corruption, criminality and illegal drugs, would prioritize bills on the following:

Go will also explore the possibility of the postponement of the barangay elections, scheduled this 2020 and give elected barangay officials more time to implement their planned programs.

He vowed, however, to remain independent as senator while ensuring that the top priority legislative agenda of the Duterte administration would be translated to laws benefiting Filipinos.

[We will work for proposed laws that will be in accordance with the policies and directions of the agencies that will respond to the true needs of our citizens.]

[The proclamation was sudden. My family is not here but in Davao.]