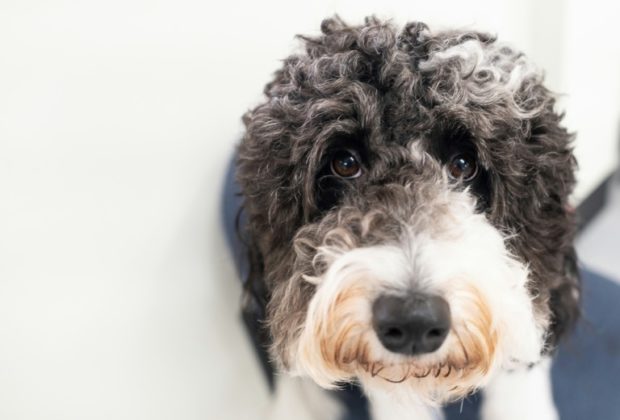 The three veterans from the United States, who all live on New York’s Long Island, suffer from post-traumatic stress disorder (PTSD) and have sought solace through pet therapy, namely, a loyal dog to keep them company. Image: AFP/Johannes Eisele

Harry Stolberg, a 42-year-old former Marine who served in Bosnia, Liberia and Nigeria, has a chocolate Labrador named Rocky who wakes him up from his troubled dreams.

And 31-year-old Phil Davanzo, who carried the bodies of fallen comrades during a hostage rescue operation that went wrong off Somalia in 2011, hopes his Rottweiler puppy will soon be trained to support him during his panic attacks.

The three veterans from the United States, who all live on New York’s Long Island, suffer from post-traumatic stress disorder (PTSD) and have sought solace through pet therapy, namely, a loyal dog to keep them company.

The shelter animals are either trained or being trained to help them through difficult times by Paws of War, an association funded entirely by private donations that then provides the service dogs free of charge. 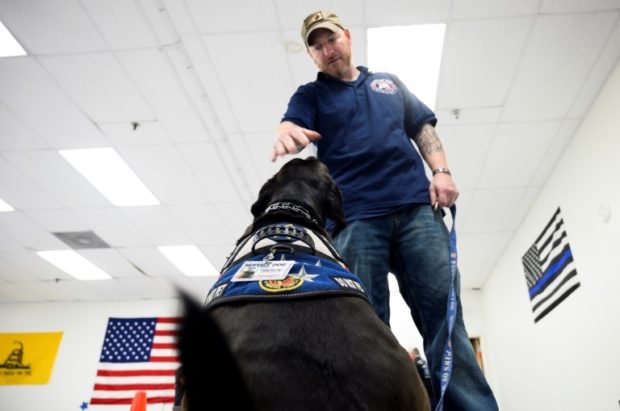 Veteran Harry Stolberg says his dog Rocky helps him wake up from the nightmares that have come after his service overseas in the Marine Corps. Image: AFP/Johannes Eisele

The group will also train a veteran’s dog if he or she already has one.

“The biggest thing is he wakes me up from nightmares,” Stolberg said of three-year-old Rocky.

“He can open the door, come in my room, turn on the lights, take my blinders off me… and lick my hands so I wake up.”

Rocky, whose 18 months of training were completed six months ago, also helps Stolberg navigate large crowds, which can be triggering.

“If I cannot move, he will get me out of that crowd, he will pick up on that. He will walk around me and look at it and if I don’t respond, he will walk away from the crowd with me hooked up to him,” he said.

Paws of War, their acronym is a play on POW, used to signify prisoners of war, has been active since 2014.

More than 100 dogs have been trained so far, and the therapeutic results for their masters have been significant.

Kidd, who suffers from severe PTSD, has been able to reduce his intake of medication thanks to Millie.

At night when things are tough, “she will come over to me, she will put her paw on my shoulder, on my chest, and just give me a big slobber,” said Kidd, whose father was in Normandy on D-Day. “That is just saying, I am here for you.” 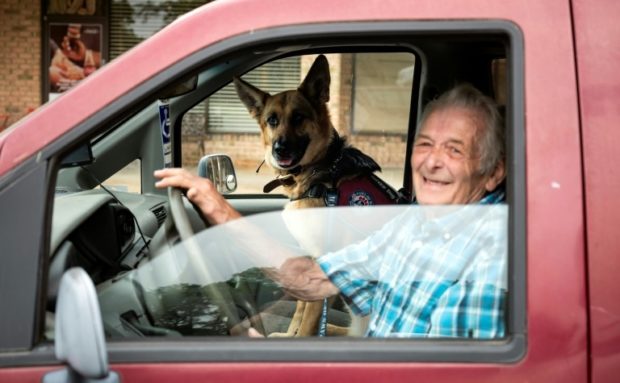 Stolberg used to need sleeping pills to get through the night, but not anymore, thanks to Rocky.

“Sleeping was my biggest problem… Now I only have a nightmare once or twice a month, instead of every day,” he explained.  “A lot of that is also because I know that when I go to sleep, he is in the room, he is going to wake me up no matter what.”

It takes 18 to 24 months to teach dogs what to do when a troubled veteran sends distress signals, according to Rebecca Stromski, a senior trainer for Paws of War whose husband served in Afghanistan and Kuwait.

“It’s quite a process actually, creating mutual respect and a connection between the service dude and the service dog,” she said. 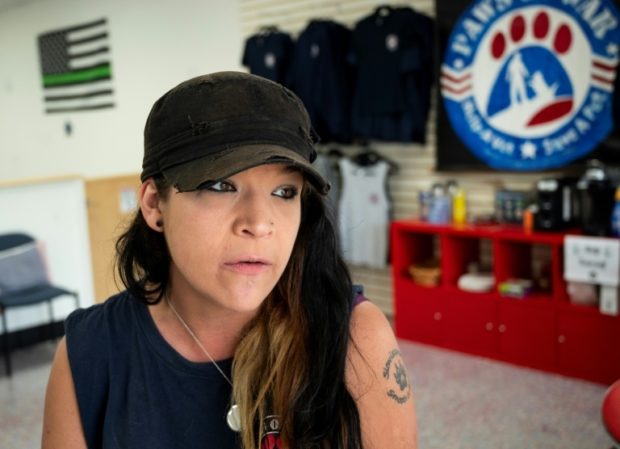 Rebecca Stromski, a senior trainer for Paws of War whose husband served in Afghanistan and Kuwait, says it takes 18 to 24 months to teach dogs what to do when a troubled veteran sends distress signals. Image: AFP/Johannes Eisele

“Once the foundations are in place and the dog starts feeling if things are going well or not for the veterans, they start to do certain motions when the guys are fidgeting,” Stromski explained. “I can start and cue that behavior and use that as an alert.”

In the face of seemingly interminable wars for U.S. military personnel in Afghanistan and Iraq, deployments which began in 2001, veterans are experiencing PTSD symptoms on a regular basis.

Paws of War has more requests for service animals than it can fulfill, with 50 veterans on the waiting list, according to the group’s co-founder Dori Scofield.

Both ends of the leash

After running an animal shelter for 30 years, Scofield launched Paws of War after being contacted by veterans returning home from Afghanistan and Iraq.

Those soldiers had become attached to dogs they had found in those countries but were unable to bring them back home.

Through word of mouth recommendations, the association quickly became a top meeting place for the 75,000-strong veteran community on Long Island, one of the biggest in the U.S. 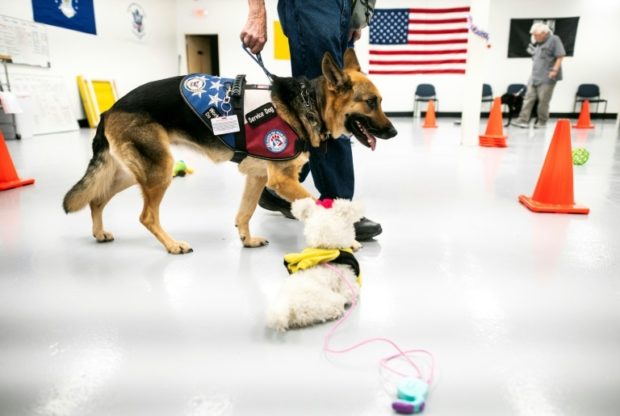 Michael Kidd’s dog Millie is being trained at Paws of War to help Kidd when times are tough. Image: AFP/Johannes Eisele

“We get applications every day, we cannot keep up,” Scofield said. “I cannot train enough dogs fast enough.”

She has opened satellite offices in Florida and in northern New York state. She has also launched a free mobile veterinary clinic where veterans can bring their companion animals.

Dogs who might have ended up put to sleep in shelters now have homes, and veterans are rediscovering “a reason to get up every day, get moving, get out,” Scofield said.

“It has been just so awesome, helping both ends of the leash.” HM/JB