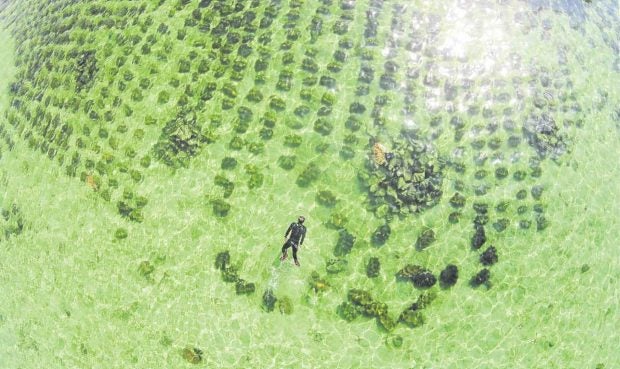 CLAM NURSERY Rows of giant clams are protected in a nursery run by the University of the Philippines Marine Science Institute near Silaki Island in Bolinao, Pangasinan province. The endangered giant clams (Tridacna gigas) are also propagated in marine research facilities in other parts of the country. —REM ZAMORA

PUERTO PRINCESA CITY, Palawan, Philippines — The future is bright for the conservation of giant clams (Tridacna gigas) after a private foundation has successfully fertilized 9.5 million eggs of this marine species that poachers seek in Philippine waters.

The Malampaya Foundation Inc. (MFI) on Monday said it had embarked on an ambitious project to propagate in large numbers the endangered giant clams, starting in the hatchery of Western Philippines University (WPU) in Barangay Binduyan here.

The spawning was supervised by scientists from the University of the Philippines Marine Science Institute (UPMSI), using methods it has developed in its decades of research on the clam species.

“Tridacna gigas are hard to propagate because the population is few. We need to really go to the brood stock [source] to collect eggs and sperms. [The situation is different] compared to other species of clams [because with their huge population, we] can still afford to [bring them to] laboratories,” Dr. Lota Creencia of WPU College of Fisheries and Aquatic Sciences said in a statement.

The native giant clams, upon maturity, will be sent to MFI’s marine protected areas in northern Palawan.

“Giant clams are important because they have a lot of ecological significance, habitat and food for some of the marine animals. It also benefits people because it helps increase fish density,” said Sherry Lyn Sayco, UPMSI researcher.

The T. gigas, with a known .01 percent survival rate, is one of the most endangered clam species and was previously declared extinct in the Philippines in the 1980s.

The UPMSI, led by national scientist Ed Gomez took specimen from neighboring Pacific Islands and began introducing it back to the country.

Gomez had later acknowledged that the Philippines’ native species of T. gigas still exists in Palawan.

Creencia said they would undertake scientific studies to determine the exact characteristics of giant clams in Palawan. 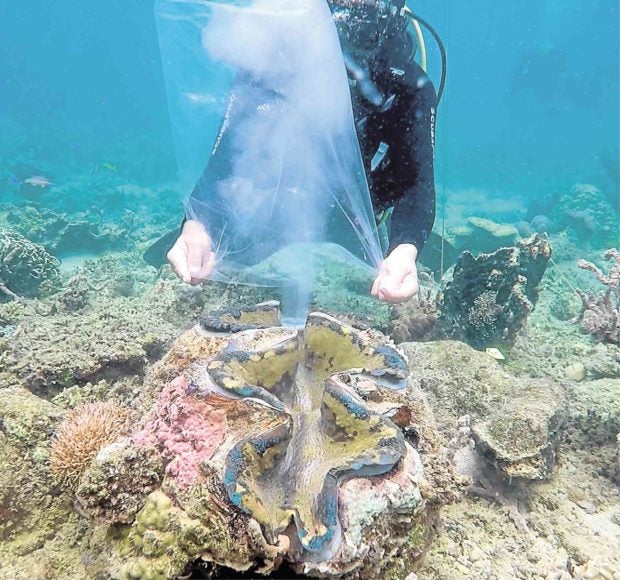 COLLECTION A diver collects sperm and egg cells from giant clams during spawning in the waters off Puerto Princesa City in Palawan province on June 1. —CONTRIBUTED PHOTO

“It is because the sizes of those found here in Honda Bay are really bigger [compared to the ones spawned from Pacific Islands], but we have to conduct a molecular study to confirm it,” she said.

The spawning activity was in line with MFI’s “String of Pearls Project” that began last year, successfully multiplying two other species of giant clams, the Tridacna squamosa and Hippopus hippopus.

MFI has been partnering with communities, local governments and agencies in Palawan, Oriental Mindoro and Batangas provinces to establish, expand and set up proper management and protection mechanisms for marine protected areas since 2013.

The giant clams were reported to have been heavily poached by Chinese fishing fleets in Scarborough Shoal and around Pag-asa Island in the West Philippine Sea. —Redempto D. Anda