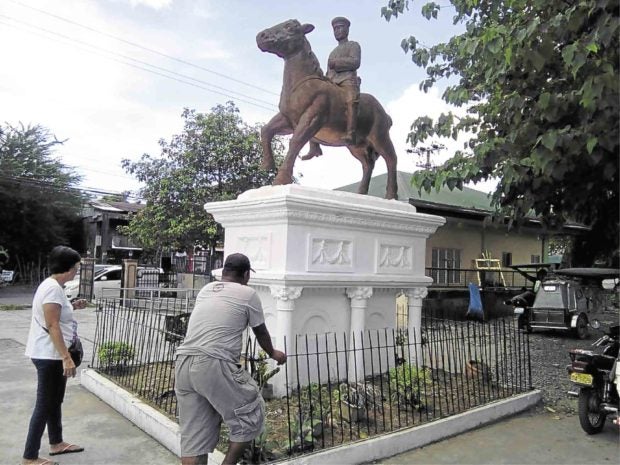 MONUMENT The heroism of Gen. Antonio Luna is remembered through this monument at Plaza Lucero in Cabanatuan City. ARMAND GALANG

CABANATUAN CITY, Nueva Ecija, Philippines — Under the scorching heat, Eric Amarile walked to Plaza Lucero and planted a candle at the tomb and statue of Gen. Antonio Luna here on June 5, the hero’s 120th death anniversary.

“I vowed that should I find myself at Luna’s tomb, I would light a candle for him,” said Amarile, an assistant election officer of San Isidro town in Nueva Ecija province.

“I believe he was a courageous and strong-willed general during that period of war [against the Americans]. His death at the hands of loyalists of Gen. Emilio Aguinaldo changed the course of our history,” he said.

Tourists rarely pay attention to Luna’s statue and tomb at Plaza Lucero in front of the St. Nicholas of Tolentine Cathedral here, said Ricardo Domingo, 43, the park’s attendant for the last 11 years.

A group of Freemasons held a brief program at Plaza Lucero. The Knights of Columbus also offered a wreath to honor Luna.

Plaza Lucero did get more visitors for a time, many from Metro Manila, after the screening of the movie “Heneral Luna” in 2015.

“Luna to me is like [Andres] Bonifacio. Both of them said, ‘The Philippines is for Filipinos,’” Domingo said.

Luna’s death at Plaza Lucero is described in a marker installed by the National Historical Commission of the Philippines at the Diocese of Cabanatuan chancery on Del Pilar Street here:

“On the plaza in front of this building, formerly the presidential headquarters of the First Philippine Republic, Gen. Antonio Luna and his aide, Col. Francisco Roman, were assassinated in the afternoon of 5 June 1899, by the members of General Emilio Aguinaldo’s Presidential Guard.”

Numerous accounts say that the fiery Luna, then 33, arrived there with two aides and a mounted escort composed of 12 soldiers to attend a council meeting.

As he climbed the stairs, Luna was told by a junior officer that Aguinaldo had left. Slighted, Luna turned to leave the room when a sergeant sprang from behind the door and slashed him with a bolo. Suffering 44 stab wounds, Luna crawled toward the plaza where he was gunned down by the guards.

Although uneventful, his death anniversary this year has revived proposals to improve Plaza Lucero, which has become a parking space for churchgoers as well as people who have business to transact in downtown Cabanatuan. —Armand Galang